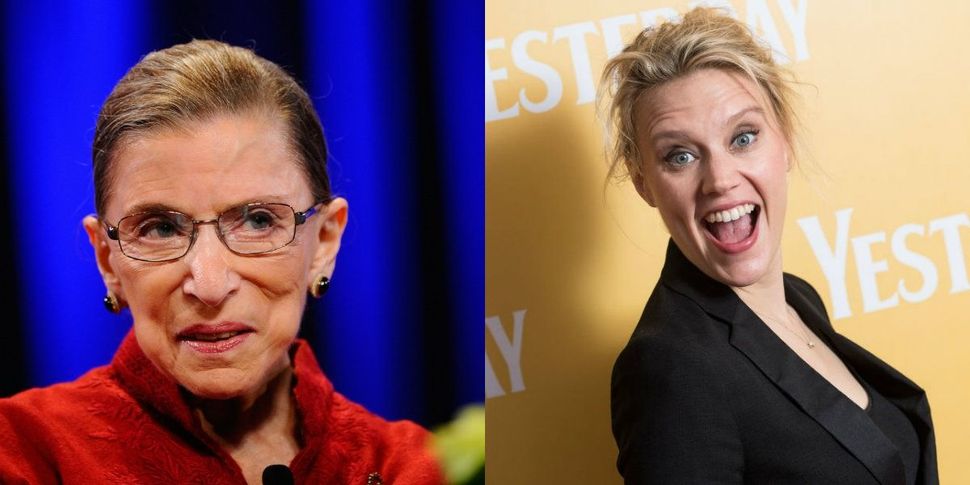 The rabbi, learned and wise, is the most important member of any shtetl.

That’s just what happened on Tuesday night at Stage 42, the Off-Broadway theater where the Folksbiene’s celebrated Yiddish-language revival of “Fiddler on the Roof” is playing.

The 86-year-old justice was as surrounded by rabid fans as she might have been if she had appeared at, say, the Kotel or at a law school graduation. Fan pictures on Twitter show her resplendent in her typical off-duty look of an embroidered robe, throwing up her hands as people swarm her.

Notorious RBG and Kate McKinnon were in the very small audience with us for tonight’s Yiddish Fiddler on the Roof at Stage 42!!

The show was simply incredible in every way. Steven Skybell as Tevye is absolute perfection.

In comparison, Emmy-winner and star of “Saturday Night Live” Kate McKinnon, appears to have enjoyed a night of virtual anonymity. But the 35-year-old’s presence didn’t escape the eagle-eye notice of Jackie Hoffman, the Hollywood actress who plays Yente the Matchmaker, who tweeted — “The fabulous Kate McKinnon was at our shtetl tonight wearing stilettos, which I am calling shtetlettos.”

Ginsburg and McKinnon, who often impersonates her on “Saturday Night Live,” posed for a picture together, dazzling a room full of — no-doubt — extremely overwhelmed fans. Legendary actor Joel Grey, the production’s director, gave both women a backstage tour, as musicians and tzit-tzit-wearing actors looked on.

The Notorious RBG Ruth Bader Ginsburg, and Kate McKinnon visited Anatevka both on the same night. They had never met before…what a moment to witness in our little shtetl! Joel was a great host! #fiddlernyc, #brushwithgreatness, #onceinalifetime, #livinglegends

Tradition means the most beloved Jewish Supreme Court justice watching “Fiddler on the Roof.” And tradition, which to Jewish people has always required both staying the same and evolving, means welcoming a non-Jewish, lesbian cutting-edge American comedian to the shtetl, too.