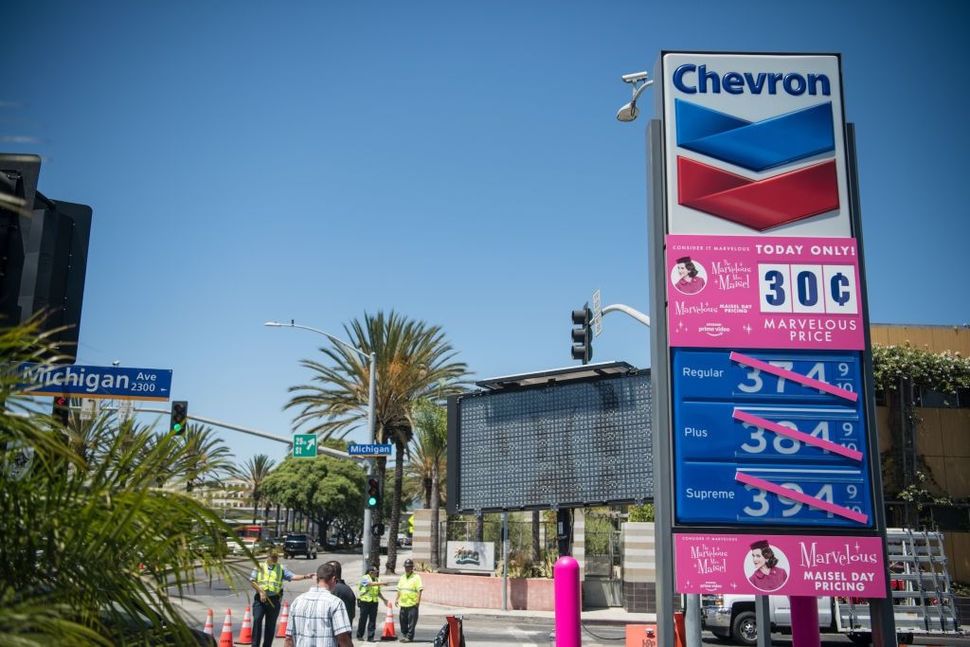 “Mrs. Maisel’ fans got a taste of the apocalypse during an Amazon promotion Image by Getty Images

Determined to buy Emmy-attention at any cost, Amazon Studios on Thursday turned Los Angeles into an homage to “The Marvelous Mrs. Maisel,” the period piece show about the spunky absentee mom dipping a pedicured-toe into comedy. Ahead of September’s Emmy Awards — “Maisel” received 20 nominations — Amazon offered city-wide promotions of costly goods at 1959 prices. Drybar blowouts and Art’s Deli pastrami sandwiches sold for chump change, while the swanky Hollywood Roosevelt Hotel offered stays for $40 a night.

But the greatest draws for Angelenos? Gas, at 30 cents a gallon. As prices in the car-dependent city have crept toward four dollars a gallon, the prospect of filling up a tank for less than a Hamilton was too much for Los Angeles. The city was driven (sorry!) into a frenzy.

Traffic surrounding the Santa Monica Chevron station offering the promotion became so overwhelming that businesses in the neighborhood were forced to shut down, and drivers reported being stuck in their own immobilized cars for hours. The Los Angeles Times reported that the cheap gas offer caused hours of traffic up the 10 Freeway. Ironically, a local art gallery said that it was forced to shut its doors, losing a day of business due to the arts promotion.

Santa Monica police temporarily shut down the gas gambit, only to reinstate it while officers worked to keep the line more orderly. Ultimately, the police department ended the promotion hours before it was set to conclude, citing safety concerns.

That means, essentially, that the Santa Monica department donated time to help one of the biggest companies in the world get attention so that its TV show could win awards. Who needs the racism and patriarchy of the 1950s when you can have times like this?