From ‘GoT’ To ‘Maisel’ To ‘Kominsky,’ Jews Dominate The 2019 Emmy Nominations 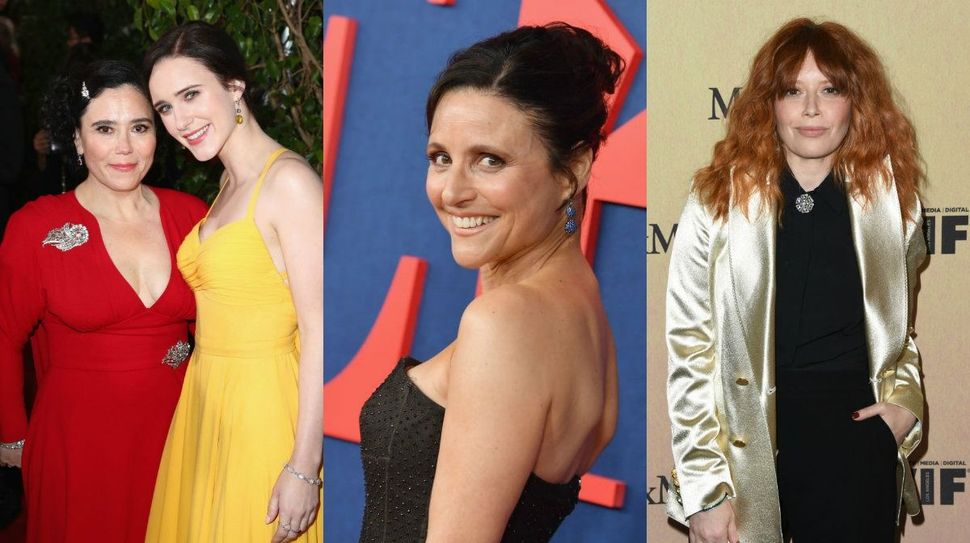 (From left:) Alex Borstein and Rachel Brosnahan of ‘Maisel,’ Julia Louis-Dreyfus of ‘Veep,’ and Natasha Lyonne of ‘Russian Doll’ Image by Getty/Forward Montage

The golden age of television continues to beat down on us mercilessly, like the sun on a particularly glorious day of global warming. The comedy is cutting-edge, the drama is devastating, and the darkly comic, Talmudic, Kabbalist-influenced prestige series is…popular?

A veritable kehillah of Jewish creators, actors, and more are up for awards at the 71st annual Emmy Awards as of the announcements this Tuesday morning.

Categories for the Emmys are more exhaustive than those for The Oscars — there are enough categories that “Game Of Thrones” leads with 137 nominations, for example. Dan Weiss and David Benioff are nominated for writing the controversial “Game of Thrones” series finale, “The Iron Throne.”

“The Marvelous Mrs. Maisel” is next with a whopping 20 nominations. And a surprise competitor comes from father-and-son duo Eugene and Dan Levy’s beloved comedy “Schitt’s Creek,” which nabbed six nominations. “The Kominsky Method” and “Barry” also did well.

“Broad City” remains un-nominated despite being the most likely of the entire bunch to be taught in Hebrew school and college Jewish sociology classes in the future (yeah that’s right, we don’t care if “Maisel” and “Kominsky” hear us saying that).

One Jew-heavy category you won’t see reviewed on many lists is Outstanding Short Form Variety Series, which will see Jewish comedian Billy Eichner facing off against Jewish comic-impresario Randy Rainbow.

Let’s take a look at the tribe members and tribe-adjacent folks who are up for prizes in the main categories at the 71st annual Emmy Awards as of the announcements this Tuesday morning. You can watch them win, lose, and schmooze on September 22 on Fox.

“Better Call Saul” This AMC show, a spinoff of the superlatively popular “Breaking Bad,” centers a lawyer who has fashioned himself “Saul Goodman,” to seem more trustworthy and better at business. Hasn’t always worked for us (ever heard of Natalie Hershlag?) but you do you, Saul. Beyond this premise and a few producers, that’s the extent of the Jewish street cred here.

“Bodyguard” There is little-to-nothing that is Jewish about this BBC show about a British policeman struggling with PTSD. But we did like this description of the show from Haaretz’s Adrian Hennigan: “At its best, it’s a tense thriller that grips like a gecko. At its worst, it’s less plausible than a Brett Kavanaugh testimony and has more holes than even President Donald Trump might consider reasonable on a weekend.” You can watch it on Netflix.

“Game of Thrones” “Game” has much more of a Jewish lineage than people admit — read about the boychiks behind the massive HBO hit here.

“Killing Eve” Unless you count anything that seems to nod to biblical characters as Jewish, there is absolutely nothing for us to claim about this riveting psychological thriller from BBC.

“Pose” The super-buzzy Ryan Murphy FX show about the New York City drag-scene of the late 1980s was co-created, like most of Murphy’s work, with Bryan Falchuk, husband to Gwyneth Paltrow and, more importantly, the scion of Hadassah leadership. The show, which brilliantly celebrates the primarily African-American and Latinx characters in that movement, also stars Jewish actress Sandra Bernhardt.

“Succession” Jesse Armstrong, the creator of the HBO hit about a family brawling over a media empire, is not Jewish, but one of his earlier works, “No Kaddish In Carmarthen,” is about a teenager who becomes obsessed with Woody Allen and pretends to be Jewish. Jewish actor Peter Friedman stars alongside the ensemble cast.

“This Is Us” The feel-bad NBC show was created by Jewish auteur Dan Fogelman, and features a near-minyan of Jewish producers.

“Fleabag” There is exactly one Jewish thing about the exquisite BBC series “Fleabag,” and that is Jewish actor Brett Gelman, who plays the protagonist’s vile brother-in-law. In fact, the show’s demonically brilliant recent second season centers around the story of a Catholic priest. But it’s so deeply, vitally demanding about questions of faith that the Amazon Prime show should be required viewing for all religious people. It’s that good.

“The Good Place” The brilliant Michael Shur, creator of NBC’s “The Good Place,” is one of ours — and his show is not about religion, but it is about morality, finding funny and touching ways to ask how people should live, and what we owe to one another.

“The Marvelous Mrs. Maisel” We believe the Jewishness of Amazon Prime’s “Mrs. Maisel” is self-evident.

“Chernobyl” The celebrated HBO mini-series was created by Craig Mazin, the Jewish screenwriter who also has the distinction of being Senator Ted Cruz’s former college roommate.

“When They See Us” A Jewish character plays a major role in this Netflix mini-series, but maybe not in the way you would like — Felicity Huffman plays Linda Fairstein in the story of the Central Park Five from Ava DuVernay.

Interestingly, no Jewish actors are up for awards in Outstanding Lead Actors or Actresses in a Drama Series. When it comes to the comedy categories, that changes.

Lead Actor in a Comedy Series:

Jewish actors Michael Douglas, for “The Kominsky Method” and Eugene Levy, for “Schitt’s Creek” are nominated alongside Anthony Anderson for “Black-ish, “Don Cheadle for “Black Monday,” Ted Danson for “The Good Place,” and Bill Hader for “Barry.”

It’s Selina Meyer’s (Julia Louis-Dreyfus) last ride through award season, and the Jew-ish actress, who is the winner of the more Emmy awards than any actor or actress in history. But hot on her heels are Rachel Brosnahan, who has already collected a handful of statuettes for “The Marvelous Mrs. Maisel,” and beloved newcomer to the category Natasha Lyonne, for “Russian Doll.” The rest of the ladies are just as formidable:

Christina Applegate for “Dead to Me,” Catherine O’Hara for “Schitt’s Creek,” and Phoebe Waller-Bridge for “Fleabag.” It’s been said often, but never felt truer — all of these artists are outstanding. There is simply no need to pick a “best.”

Can you believe people still have the nerve to be anti-Semitic, what with these glorious talents? Not that we think it should work that way, but come on! We’ll see our best friends Sarah, Billy, Eugene, Brad, Marti, Henry, and Natasha in just a few weeks.

From ‘GoT’ To ‘Maisel’ To ‘Kominsky,’ Jews Dominate The 2019 Emmy Nominations