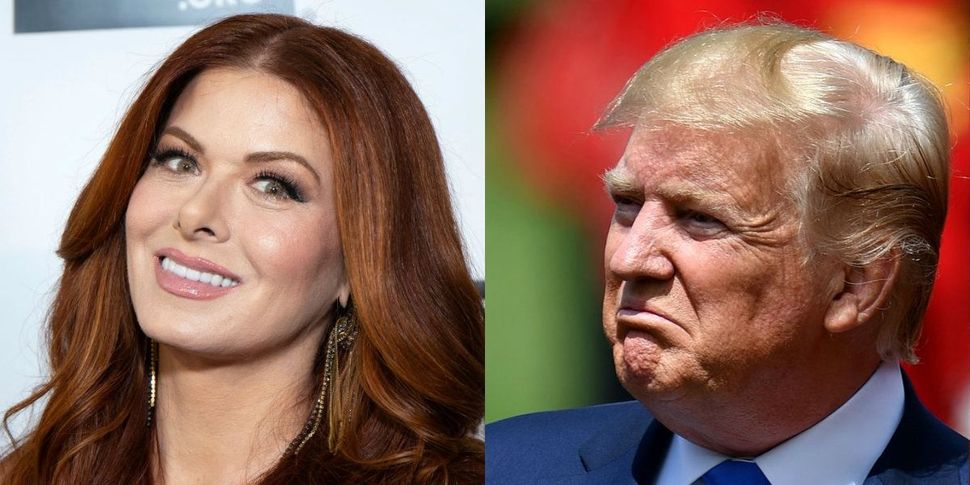 President Trump took a breather from the trade war with China Thursday morning to enter the fray against “Will & Grace” actress Debra Messing.

Messing, the 51-year-old Jewish actress who became a demi-icon for her portrayal of Jewish interior decorator Grace Adler on NBC’s “Will & Grace,” a role she reprises currently on the network, is an outspoken Democrat. Messing’s staunch liberalism has grabbed headlines since 2016, when her feud with the more leftist actress Susan Sarandon began. Now, the president has stepped in to take up Sarandon’s slack (this is why you can’t just dismiss pop culture, y’all).

In an instance of nicknaming that is vitriolic even for the eagerly mudslinging president, Trump tweeted, “Bad ‘actress’ Debra The Mess Messing is in hot water. She wants to create a ‘Blacklist’ of Trump supporters, & is being accused of McCarthyism. Is also being accused of being a Racist because of the terrible things she said about blacks and mental illness. If Roseanne Barr [continued in a second tweet] said what she did, even being on a much higher rated show, she would have been thrown off television. Will Fake News NBC allow a McCarthy style Racist to continue? ABC fired Roseanne. Watch the double standard!”

Again, the Schmooze cannot help but stan a president who follows the machinations of the TV industry so closely! Let’s break down the many cultural references he’s making here:

On August 31, Messing tweeted in response to a Hollywood Reporter article about a fundraiser for Trump in Beverly Hills, “Please print a list of all attendees please. The public has a right to know.” The next day, the president responded to Messing’s tweet, recalling a time when Messing thanked him for boosting NBC viewership with “The Apprentice,” and called him “sir.” The fact is, we would all very much like to be called “sir” by Debra Messing.

I have not forgotten that when it was announced that I was going to do The Apprentice, and when it then became a big hit, helping NBC’s failed lineup greatly, @DebraMessing came up to me at an Upfront & profusely thanked me, even calling me “Sir.” How times have changed!

That same week, Messing landed in what the president would call “hot water” again — she liked a tweet showing an image of a church sign in Birmingham, Alabama that read on one side “A black vote for Trump is mental illness,” and on the other, “A white vote for Trump is pure racism.” After Trump-supporting black comedian Terrence K. Williams released a viral video blasting Messing, accusing her of saying that black people cannot think for themselves, she tweeted an apology. She added, “You won’t accept this but black people are targeted by Trump’s GOP for voter supression [SIC]. Charlottesville was about Trump supporters hating POC and Jews.” In the same tweet thread she defended herself against claims of McCarthyism: “I NEVER NOR WOULD I EVER call for a blacklist of anyone for any reason,” she wrote. “The info is publicly available.”

Finally, the president compared Messing’s words and behavior to those of fallen comedian Roseanne Barr, who was fired from the popular ABC reboot of “Roseanne,” her star vehicle “The Connors,” after saying that former Obama advisor Valerie Jarrett is like if “muslim brotherhood & planet of the apes had a baby.”

Trump compares Barr, who was booted off TV for racist comments, and Messing, who has also been accused of racism. A significant difference is that Messing pressed “like” on a controversial tweet, whereas Barr called a person a terrorist monkey. Messing won’t be fired by NBC over her lukewarm firebrand Twitter activism. But anyone who thinks the president is just a TV-binging lout is sorely mistaken — he’s clever to apply a moral purity test to Hollywood stars, a favorite liberal pastime. He’s clever to take the opportunity to link NBC to unevenness and ABC to honesty. He’s clever to signal to his base that Hollywood is ultimately hypocritical, slimy, and full of secret loyalties.

It’s tempting to scorn Trump’s flair for turning every moment of his life into reality TV. But it was his willingness to use celebrity disdain as proof of his man-of-the-people bonafides that helped bolster his campaign in 2016.