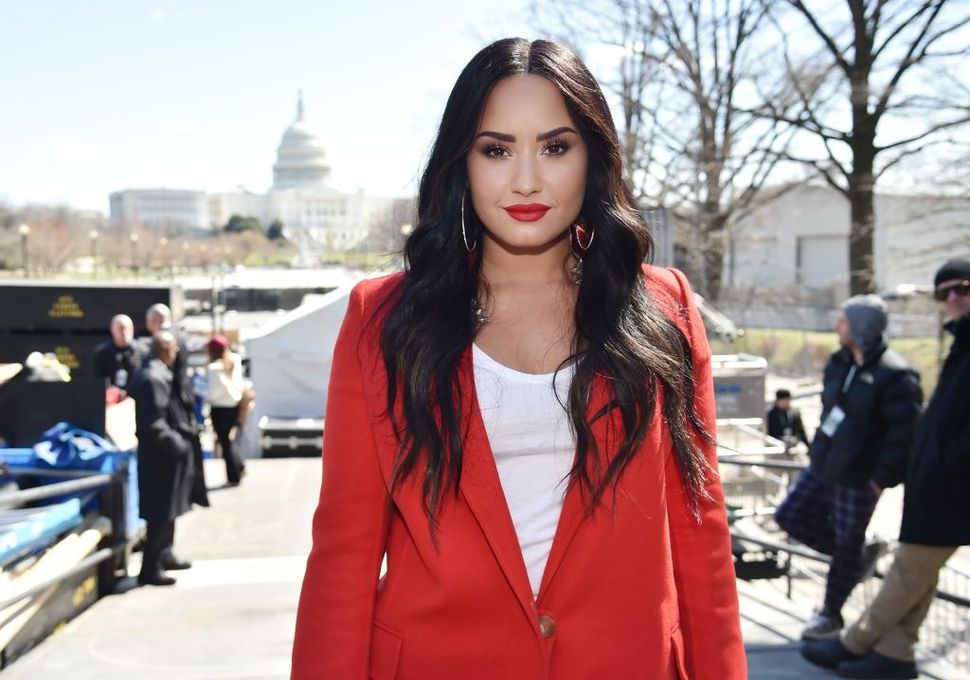 Really, though. Multi-platinum U.S. pop star Demi Lovato had an experience this summer that was identical to one that has been shared by over 500,000 Jewish Americans: She went on a two-week trip to Israel that was paid for by the Israeli government and private donors. She accepted her hosts’ pre-made itinerary and made a vague agreement to promote Israel in the future. She wore long sleeves to the Kotel, cried at Yad Vashem, and described her trip as “magical.”

Here’s the biggest difference — while Birthright participants may feel that they owe something in exchange for their free ride, Lovato took the trip explicitly in exchange for a promise to post images of the trip on social media. Israeli news site Ynet reported that the Jerusalem Ministry paid Lovato 200,000 shekels, or about $57,000, for the trip, while the rest of the funding came from an anonymous donors. Earlier reporting by YNet suggested that Lovato was compensated that amount as well as gifted the trip, but the publication has retracted that claim, saying that $150,000 was the cost of the trip. J-Insider reporter Amy Spiro writes that two unnamed sources told her Lovato was not financially compensated for the trip.

Lovato is a 27-year-old Disney Channel breakout with a silvery, mammoth vocal quality and a number of serious personal issues, including addiction and bulimia. Lovato, who has been open about those issues as well as her diagnosis with bipolar disorder, was raised Christian but discovered in 2012 that she has some Jewish ancestry, telling fans, “I’m a little bit Jewish!” She was spotted with her mother, Dianna De La Garza, touring Israel in the last two weeks of September, but only began sharing pictures from her trip on social media on Wednesday.

Zev Elkin, a member of Netanyahu’s Likud party and Israel’s Minister of Immigration and Absorption, told YNet that Lovato’s visit is part of a new initiative to promote Israel through “celebrities whose exposure to social media is greater than major media outlets.” Lovato has over 74 million followers on Instagram, which is equal to nearly a quarter of the U.S. population. “Demi Lovato’s successful visit and historic Jerusalem exposure to new audiences on a massive scale is another step in implementing the program,” Elkin said.

In fact, tourism bureaus — and by extension, governments — shelling out for celebrities to promote tourist destinations is common. In 2011, actor Richard Gere travelled to Indonesia with his family on a trip that was reportedly paid for by that country’s government, agreeing to become the country’s “informal tourism ambassador.” Director James Cameron likely accepted either a check or a free ride for his 2016 advertisements for New Zealand. And, perhaps most famously, Taylor Swift partnered with New York City’s tourism and promotions office to mixed reviews from the locals in 2014 — she too was unpaid, though her promotions were part of an effort to boost her single “Welcome To New York.”

So Lovato’s tit-for-tat with the Israeli government is not unique among celebrities — if you didn’t know that music mogul Pitbul enjoyed a $1 million check in exchange for promoting Florida, well, you’re welcome.

I am an American singer. I was raised Christian and have Jewish ancestors. When I was offered an amazing opportunity to visit the places I’d read about in the Bible growing up, I said yes. There is something absolutely magical about Israel.  I’ve never felt such a sense of spirituality or connection to God…something I’ve been missing for a few years now.  Spirituality is so important to me…to be baptized in the Jordan river – the same place Jesus was baptized – I’ve never felt more renewed in my life. This trip has been so important for my well-being, my heart, and my soul.  I’m grateful for the memories made and the opportunity to be able to fill the God-sized hole in my heart. Thank you for having me, Israel ?

The first series of pictures Lovato uploaded to Instagram shows the singer receiving baptism in the Jordan river, placing her hand on one of the stations of the cross, observing the Western Wall Plaza, and posing in the City of David. “I am an American singer. I was raised Christian and have Jewish ancestors. When I was offered an amazing opportunity to visit the places I’d read about in the Bible growing up, I said yes. There is something absolutely magical about Israel. I’ve never felt such a sense of spirituality or connection to God,” Lovato captioned the post, before expanding on the baptism. “Thank you for having me, Israel.”

In a separate post, she shared five black and white images of her tour through Yad Vashem, Israel’s Holocaust museum. Her photos — which are unusually thorough, for a celebrity trip to a site of Holocaust remembrance — show the famous Hall of Names, collections of victims’ shoes, yellow stars, and images of Jewish life in Europe before the outbreak of the war. “My heart was absolutely broken in Yad Vashem.”

Finally, she shared images of her visit to Jerusalem’s Shalva Center, a non-profit that offers services to differently-abled Israelis, and the home of the viral musical group, the Shalva Band. “What an amazing center for children with special needs,” she wrote.

Lovato quickly received backlash from some fans — comments and tweets condemning her for not calling the country Palestine, for supporting “Zionism,” for not acknowledging the conflict, and for visiting the country at all. Lovato has since turned off commenting on the posts and deleted all comments, but screenshots show her pushing back at fans in the comments section. “I will not choose a side. I went to a place, for a religious purpose, THAT’S IT,’ she responded to one person. “Oh, don’t worry, you guys made me feel terrible about it and prob will continue to do so,” she addressed her critics, also in a comment. “I’ll be hibernating.”

Then, in an Instagram story — a feature on the social media site that makes posts available for just 24 hours — which she later deleted, Lovato apologized and addressed the controversy. “I’m extremely frustrated,” She began. “I accepted a free trip to Israel in exchange for a few posts. No one told me there would be anything wrong with going or that I could possibly be offending anyone. With that being said, I’m sorry if I’ve hurt or offended anyone, that was not my intention.”

She went on, “This was meant to be a spiritual experience for me, NOT A POLITICAL STATEMENT.”

It’s the kind of thing one wishes Theodore Herzl, who loved theater, had lived to see — a Christian, American diva insisting no one told her that Israel was associated with controversy, as the Israeli government and shadowy private funders shell out for her six-figure taste, and millions watch.