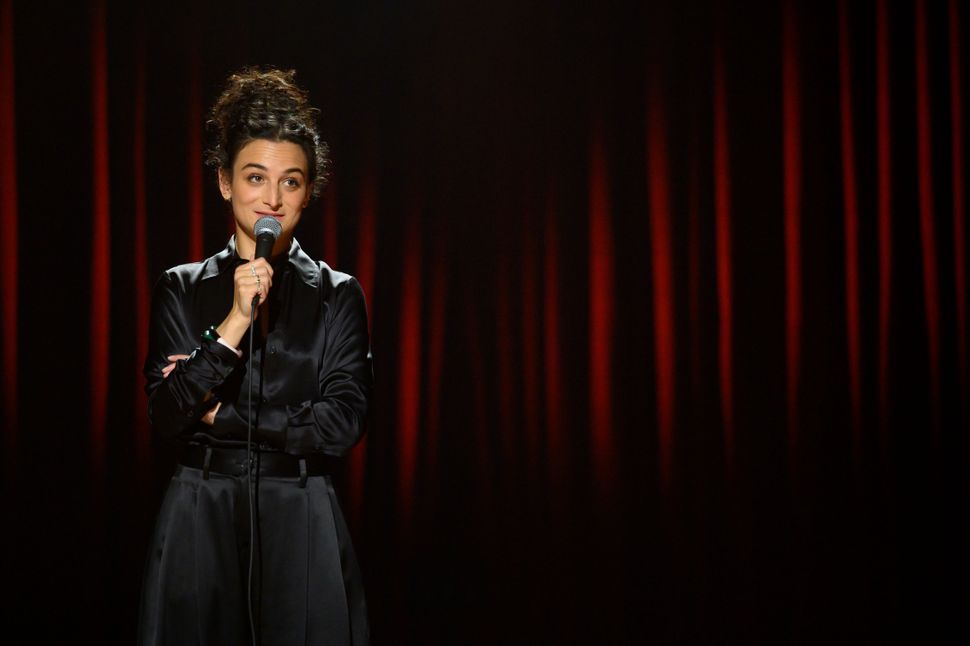 When Jenny Slate, the beautiful, turtle-like comedian, did a parody of a Hanukkah song on her new Netflix special, I laughed so much that I ever-so-slightly wet myself.

“Dressed for death,” and, by her own admission, an adult doppelgänger for Anne Frank, the 37-year-old sang a brief, made up Hanukkah song that may just unseat “Ma’oz Tzur.” The bit doesn’t offer anything new to the genre of jokes about how Christmas music is better than Hanukkah music (joke real estate Adam Sandler has been collecting rent on for decades) or how Judaism is weird and sad (see: the work of countless comedians.)

It’s just that Jenny Slate brings a new level of genuine panic in response to the concept of Judaism.

Lucky for you, her Christianity vs. Judaism comparison is one of the only clips Netflix has made publicly available. The Hanukkah joke starts at 1:51, but the whole thing will make you want to bring flowers to a tired Jewish educator:

“Stage Fright,” released this week on Netflix, is billed as Slate’s first comedy special. Directed by Gillian Robespierre, the mind behind Slate’s breakout in 2014 in the indie abortion comedy “Obvious Child,” this is part-standup special, part-loving video eulogy one might see at the funeral of a young person.

Slate is very funny, of course — get out your stream before you stream, is what I’m saying. But that’s not her main appeal, and she and Robespierre seem to know that. She’s compulsively beguiling. We watch as she tries on her grandmother’s dresses, reads her teenage journal entries, interviews each of her family members. We listen to her speak about her need to be loved, spliced with footage of her picking her nose in ballet class as a toddler. It’s like we’re the male protagonist in a romantic comedy, and this is an overly-long montage about the woman we’re fantasizing about.

And it totally works. It’s the world’s most wholesome — and wholesale — seduction.

Slate litters her comedy with references to Judaism. “The synagogue that I went to when I was a kid looked like a Chinese restaurant from the 70s without windows and it was like, such a bummer,” she sighs. And she’s depressingly funny on Hollywood’s treatment of women (“They’re trying to make my body look like the body of Billy Elliot.”) But a lot of this feels like watching someone with multiple unmanaged mood disorders take advantage of herself to appeal to audiences. To those who tell anxious people to “just be yourself,” she snaps, “Oh, okay, you should see how many selves there are in my psyche. Because some of them are f*****g murderers, and they’re trying to kill me.” She stars at the camera and adds, “I’m surviving them.”

“In general I’ve always been really afraid to be alone,” Slate says, late in the special, having reflected on the trauma of her 2016 divorce from Dean Fleischer-Camp. The special ends, and she’s in a shadowy room in her childhood home, dancing alone, like a kinder version of Zooey Deschanel’s “500 Days Of Summer” character come to life.

Here’s where it’s important to remember that before “Stage Fright” was even announced, Slate’s painter-poet boyfriend proposed to her outside an abandoned castle in France. So we don’t need to be devastated for her.

But you get the sense that Slate’s relationship status doesn’t change or fix her relationship with the rest of the world. An audience isn’t enough, she says, shaking backstage before performing her “Stage Fright” set.

“Right before I go on stage, I am, like, presented with this essential question, which is, like — will they — will they — like, like me?” she says. “I don’t earn the love unless I give something beautiful.”