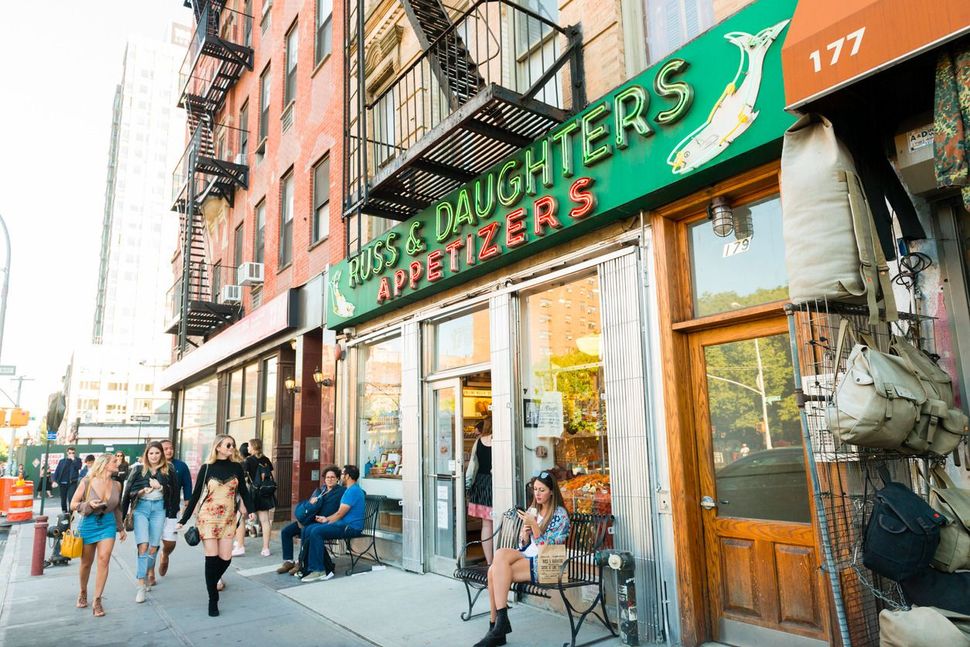 Russ and Daughters. Image by iStock

Update, 6/6/21: As of Thursday, both parties have removed their original posts and arrived at an amicable resolution. After representatives from The Borscht Belt clarified that the design process had been outsourced to another company, and that its owners, including Nick Liberato had not been personally involved, Russ and Daughter posted on Instagram wishing “Nick and his project all the best.” In its own statement, the Borscht Belt praised Russ and Daughters as a “one-of-a-kind institution” whose “impact on New York’s food history has been tremendous,” confirmed that it has altered its design plans and reiterated its commitment to offering diners a “Catskills-themed experience.” The up-and-coming deli accompanied its statement with a quote from the ancient rabbi Shimon Ben Gamaliel: “On three things does the world stand: On justice, on truth and on peace.”

In what should be but unfortunately is not a minor subplot in “The Marvelous Mrs. Maisel,” the iconic New York appetizing store Russ & Daughters is defending itself after a New Jersey upstart allegedly pirated its century-old design.

The controversy is playing out in the Borscht Belt — not the Catskills enclave where midcentury Jews played endless rounds of croquet, but a deli going by the same name and set to open in Stockton, New Jersey, this spring. The new eatery is helmed by Nick Liberato, a chef who made his name with the Netflix show “Restaurants on the Edge,” in which he traveled the world to provide design makeovers to ailing restaurants. But when it came to the design of his own stateside venture, fourth-generation Russ & Daughters owners Niki Russ Federman and Josh Russ Tupper saw a lot that looked familiar.

“We are very supportive of anyone who wants to open a business,” they wrote in an open letter on Instagram that contrasted interior photos of their appetizing store with eerily similar snapshots of Liberato’s self-proclaimed “love letter to the Jewish delicatessen.” The pair called Liberato out for copying several elements of their “iconic design,” including lightbox signs over the counter (a distinctive motif at the original Russ & Daughters as well as at their newer outposts in Brooklyn and at the Jewish Museum) and the “Be a Mensch” slogan they devised as a cheeky plea for customers to wait for seating.

Liberato hadn’t even appropriated their aesthetic correctly, the duo argued. As an appetizing store serving dairy and pareve items, Russ & Daughters is a relic of an era in which Jewish eateries hewed closely to kosher rules. The Borscht Belt seems poised to provide a medley of appetizing classics and carnivorous deli staples. This isn’t uncommon — in all fairness, any number of modern Jewish eateries have similar menus — but it’s also reflective of a mainstream culture that enjoys Jewish noshes but isn’t all that interested in learning about Jewish traditions. And to the Russ & Daughters team, it added insult to injury: “You are copying us without credit or an understanding of the food tradition we uphold, while couching your plagiarism as ‘homage’ to some bygone era that has disappeared,” they wrote.

What followed was the kind of comments-section scrum that’s now almost as common as a bagel and schmear. An official account for The Borscht Belt rejected the allegations, reflected philosophically that “negativity never leads to positive results” and, bizarrely, cited Liberato’s Jewish wife as a broad justification for his decision to open a deli. (Last time the Schmooze checked, anyone can sell Jewish food but marriage to a Jew is not a blank check for artistic license.) On his personal account, Liberato responded exactly the way you’d expect of a man who’s been paid by Netflix to travel to different countries and teach restaurateurs about their local culture: With a stream-of-consciousness defense in which he chided the appetizing store’s owners for being “a little bit on your high horse” and argued that “Jewish culture should be more supportive of each other, not tearing each other down.” (Neither Liberato nor The Borscht Belt responded to requests for comment.) Meanwhile, food writers like the New Yorker’s Helen Rosner came to Russ & Daughters’ defense, and independent food world watchdog Joe Rosenthal surfaced a Pinterest board created by one of the deli’s co-owners, which incorporated pictures of the Russ & Daughters interior as inspiration. 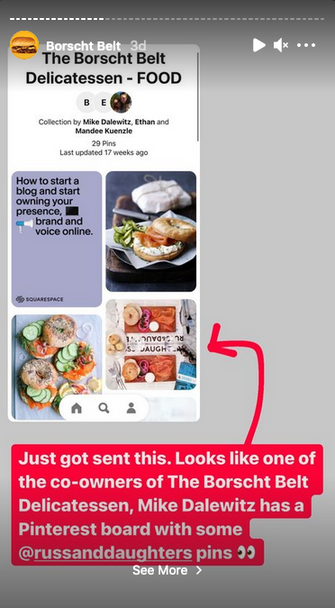 Food watchdog Joe Rosenthal surfaced a Pinterest board created by a co-owner of The Borscht Belt, which cited several pictures from Russ and Daughters as inspiration. Image by Joe Rosenthal

By Monday, those posts and the Pinterest board were gone, although screenshots will live on forever in Rosenthal’s Instagram stories. They were replaced by a much more lawyerly statement from The Borscht Belt, which conceded that “We have recently been made aware that a couple of years ago you were granted some protections on your design” and agreed to make “design choices to remedy this” before opening.

A post shared by The Borscht Belt Delicatessen (@theborschtbelt)

It’s a shame things had to play out this way. New Jersey, where the Schmooze grew up, is (rightfully) proud of its bagels but, except in bedroom communities near New York, low on full-fledged delis and appetizing stores. As the centers of Jewish culture move away from neighborhoods like the Lower East Side, we need to make and eat our food where we are, without relying solely on a handful of legacy restaurants to preserve our tradition for us. In different circumstances, the Schmooze wouldn’t just celebrate the arrival of an appetizing store near our hometown — we’d drive out for the opening.