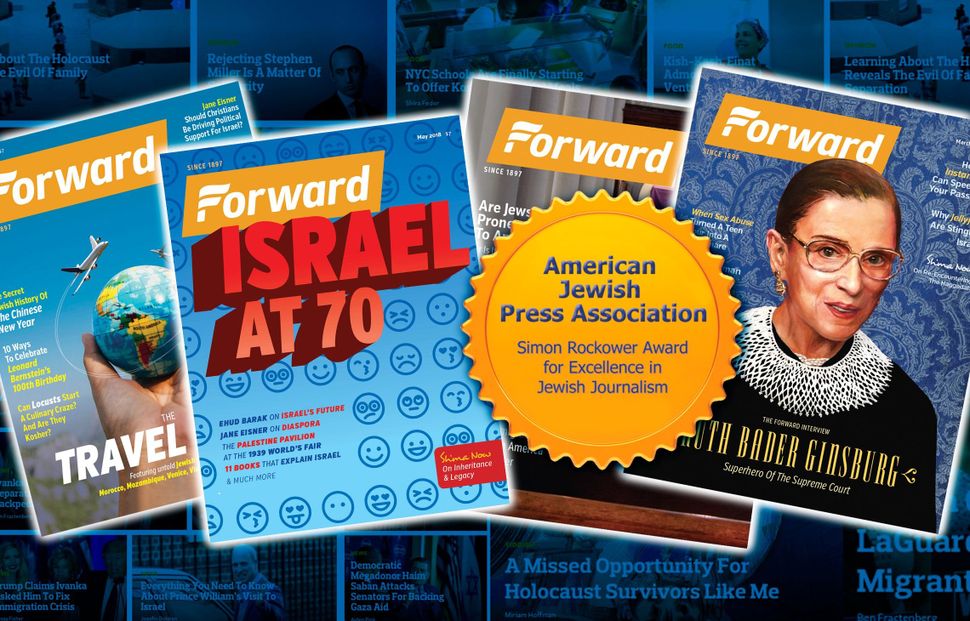 Graphic by the Forward

The Forward was honored to receive 12 Simon Rockower Awards from the American Jewish Press Association this week. The awards, which recognize achievements in Jewish journalism, included eight first-place wins for the Forward.

At the awards ceremony, held during the AJPA’s annual conference in Cleveland, Ohio, the group recognized the Forward and the Yiddish Forward for Jewish journalism in 2017 in categories including investigative reporting, arts and culture writing, feature writing, editorial writing, and a first-place recognition for our pioneering new Jewish College guide.

“It’s always gratifying to be honored by your peers, especially in so many different categories,” said Jane Eisner, editor-in-chief. “At a time when independent journalism is under assault, it’s inspiring to recognize the fine work of the Forward staff, and of so many of our colleagues across the nation.”

Eisner was among the winners. “The Forward’s editorials are in a class of their own,” the AJPA extolled. The Forward took the first place award for Excellence in Editorial Writing for articles which the AJPA called “thought-provoking, powerful, well-crafted and well-argued.” Three superlative editorials clinched the win — “What The Forward really said about Gorka – And why we’re proud we did” by Eisner, “For shame” by Dan Friedman, and “Why engaging with Israel is essential,” also by Eisner. The latter piece, the AJPA wrote, “offered a unique approach toward resolving a painful, timely and very sensitive issue.”

In news reporting, The Forward earned the top prize for investigative reporting for a series of pieces reporting on Sebastian Gorka, by Larry Cohler-Esses and Lili Bayer. “Investigative journalism that made a difference by exposing Sebastian Gorka’s dubious credentials and his ties with ultra-nationalist, anti-Semitic organizations in Hungary,” the AJPA wrote. “The attention this work garnered ultimately forced Gorka out of the Trump administration, eliminating core member of the administration’s populist cabal.” The same two writers picked up a second place win for excellence in news reporting for the piece, “Nazi-allied group claims top Trump aide Sebastian Gorka as sworn member.” The piece included the admission by two leaders of the Vitezi Rend, a Hungarian group with Nazi-ties, that Gorka was a sworn member of the group.

In features writing, the Forward and the Yiddish Forward were both recognized, with a first place win for the Forward for Sam Kestenbaum’s fascinating article, “How this Reform Jew became a ‘deplorable’ pro-Trump militia leader,” and a first place win for the Yiddish Forward in their division for “Finally, Der Nister gets a gravestone” by Ber Kotlerman & Alexandra Poljan. That evocative article, which follows a struggle to honor the life of Yiddish writer De Nister, was called by the AJPA, a “fascinating journey and look into a pocket of Judaism.” That same piece won a second award, second place for excellence in writing about Jewish heritage and Jewish peoplehood in Europe.

In arts and culture, David Zvi Kalman’s gorgeous writing on the history of Hanukkah light took first place, while Talya Zax’s “How Modigliani’s Jewishness Informed His Art” took second. “A fascinating story, well told,” the AJPA wrote. Writer Daniel Witkin took first place in the division for reporting on an artistic endeavor, trend, movement or personality for his “excellently written and very well analyzed” piece “How Jerry Lewis became a great filmmaker and embarrassed everyone in the process.”

Forward News Editor Helen Chernikoff accepted the awards on behalf of her colleagues.

News releases are written by the Forward’s communications staff on behalf of The Forward Association, its nonprofit publisher.

The Forward delivers incisive coverage of the issues, ideas and institutions that matter to American Jews. Its rigorous reporting and balanced commentary on politics, arts and culture have won numerous awards year after year and made it the most influential nationwide Jewish media outlet.

Founded in 1897 as a Yiddish-language daily, the Forward soon became a national paper, the most widely read Jewish newspaper anywhere. The English Forward was launched as a weekly in 1990 and moved to fully digital publication in 2019. (Read more)