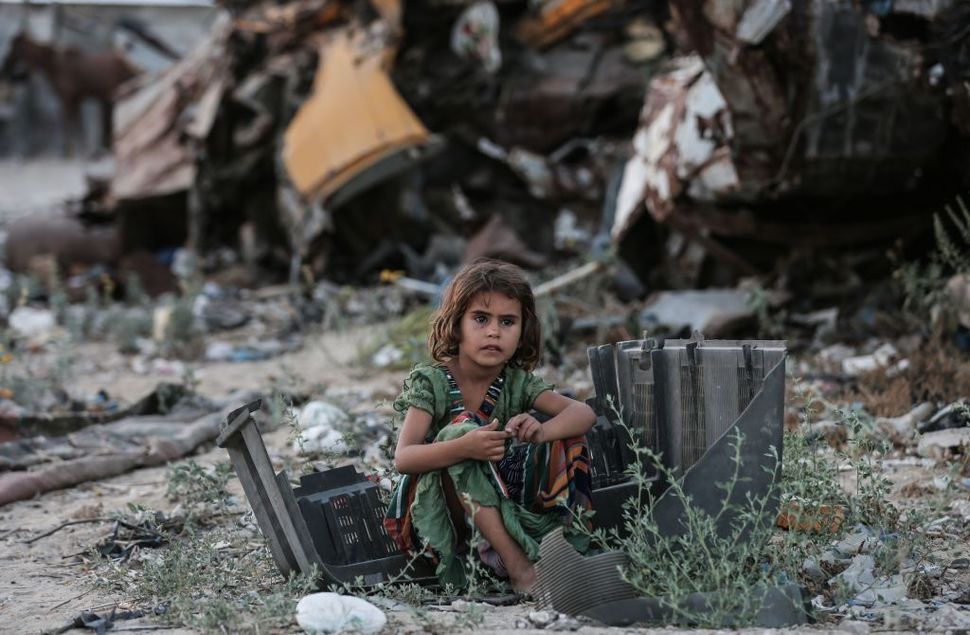 A Palestinian child plays in an impoverished area of the Khan Younis refugee camp in the Gaza Strip on July 29, 2018. (Photo by MAHMUD HAMS/AFP/Getty Images) Image by Getty Images

Yesterday, a right-wing Zionist Twitter personality directed the following question at me and some others:

1000s of Palestinians killed, tortured, jailed in Assad’s Syria. Why the silence of many pro-Palestinian voices? Could it be that #Israel isn’t involved? Do these folks truly care about Palestinian welfare? Or are they just cynically using Palestinians as a weapon against Israel?

It was originally posed by David Harris, the CEO of the American Jewish Committee. The Tweeter was just directing it toward me and others (like Independent Jewish Voices Canada) who she judged deserving of the ethical challenge.

This type of question is raised often, and it is easy to answer. Speaking for myself, and hopefully for some others as well, there are two reasons that I write about or share criticism of Israel’s policies toward Palestinians and rarely discuss the abuse of their human rights by Syria or Jordan or whomever else.

The first is one I would guess I share with many other Jewish journalists and activists: I am Jewish, and crimes toward the Palestinians are being perpetrated by my people. I feel an elevated responsibility to speak out against evils being done by my own. It is also true that when working as a journalist for Jewish publications, I am writing about Jewish issues, and I can’t think of any more pressing Jewish issue than what the state that claims to be “Jewish” is doing wrong and needs to be confronted about.

When I first studied Gandhi, I came to admire the way that he criticized his own side, and not just the British. Since then, I have felt that every group should focus their primary attention on self-criticism, rather than on criticism of their political “opponents.” (And since every time I mention Gandhi I get told I am no Gandhi, let me preemptively save you the trouble: I know.)

So the first reason is that I think the causes of justice and peace throughout the world would be best served by people focusing their criticism on their “own side.” I would extend this argument to the Palestinians as well, that they should focus their primary criticism on their own — although I am generally not interested in telling them what to do both because of the principle I am advocating and because of the overwhelming oppression, injustice and trauma they live with.

Some will assume that I am using this principle of criticism to cover up my animus toward Israel. I would like to point out that I have been, for decades, a practicing Buddhist, and that I also write for Buddhist publications. In that role I have written over a dozen articles about the genocide Burmese Buddhists are perpetrating against the Rohingya, and have also covered Bhutanese Buddhist violence against Nepali Hindu refugees, Sri Lankan Buddhist violence toward Muslims and questionable efforts in Thailand to police the behavior of non-Buddhists toward Buddhist sacred objects.

The second reason I criticize Israel, which I think may apply to some of my non-Jewish colleagues as well, is actually complimentary to the Zionist state. When called to write about Chinese or Burmese human rights violations, I do, but I’ll confess that I have less hope that those governments will respond to reason or pressure than I have for the Israeli government. When it comes to Syria, I have no hope at all. That doesn’t mean that I am against writing about Syrian human rights violations — quite the opposite — but that I am just not as motivated to do so.

Israel claims to be, and to some extent is, a democratic country respecting human freedoms and reason. Up until very recently, I have believed that the Israeli government would respond to international pressure and activism. I have to admit that my hope is currently fading, as I watch Israel deport painters, interrogate leftists, jail poets, blacklist those who engage in nonviolent protest, try to criminalize the documentation of its human rights abuses, demolish Bedouin-Palestinian villages to build Jewish ones, move to annex the West Bank and starve Gazans. Even the fundamental Israeli virtue and past-time of heated polemic is under attack, and a cartoon criticizing state racism can get someone fired.

That said, I have not lost all hope. I guess when I do, my right-wing Zionist critics will finally have won, and I’ll go silent.