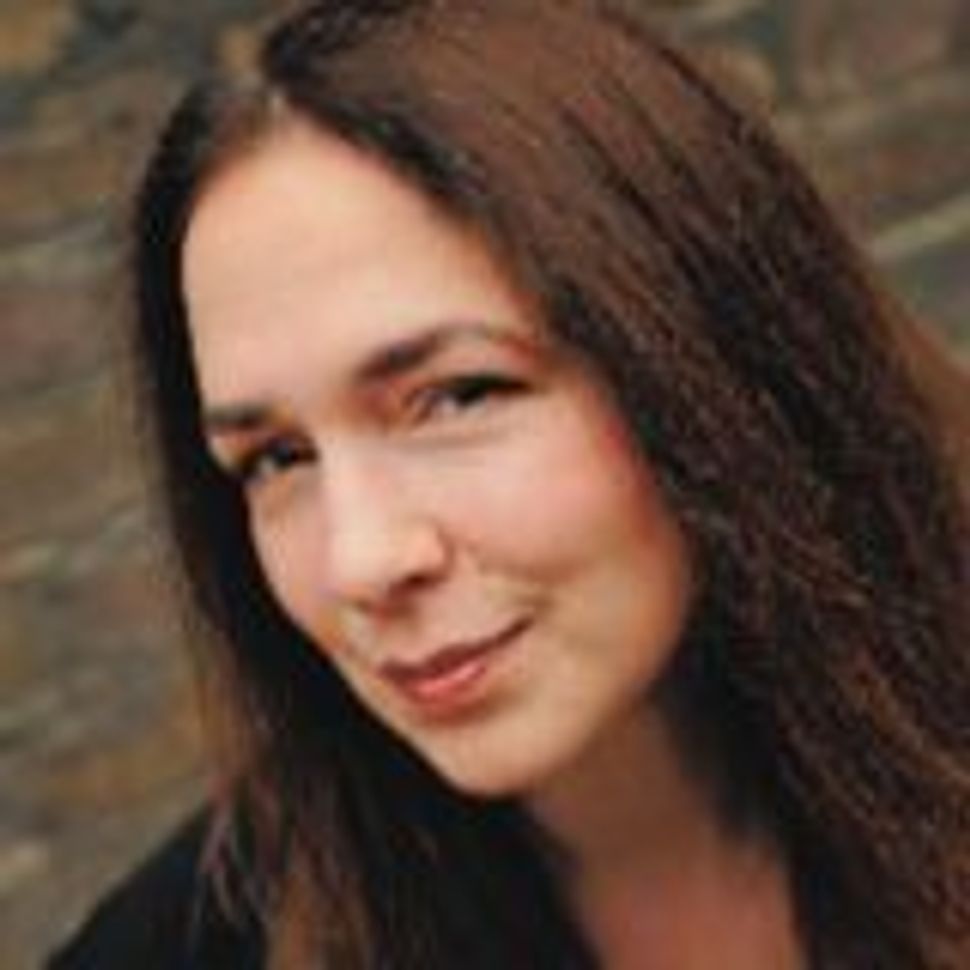 In Lorrie Moore’s profound novel, “A Gate at the Stairs,” Gail, the Jewish mother of the half-Jewish protagonist Tassie, metaphorically sits in the dark. She doesn’t loom or pace, or hover and we never learn too much about her, but her absence is more curiously present than usual for a minor character because the plot of the book centers around mothering and mothers replacing mothers.

As many have said about Moore’s writing, its boldness shows that she isn’t afraid of very much. Her style includes the kind of things that other less courageous authors shy away from: playing with words, using exclamation points, combining sadness with silliness, mixing jadedness and profundity, hammering the truth of despair into a reader’s bones. And these are all found in “A Gate at the Stairs.” But what she has done with Gail, the Midwestern Jewish mother, leaves the Jewish reader marveling at her subtler skills as well.

Gail’s daughter, Tassie Keltjin lives and attends college in Troy, a progressive midwestern town twenty-five miles from Green Bay, Wisconsin — “The Athens of the Midwest.” In her Sufism class she describes herself to a classmate as a “quasi-Jew.” The book centers around her employment as the nanny of a half-black adopted baby, hired by a sharp and quirky woman named Sarah Brink (who is also a “half-Jew”) and her husband Edward.

Tassie helps raise the baby: she feeds her yogurt pops, takes her ice-skating, lets her sleep on her bare chest, and teaches her to sing, sometimes accidentally old slave spirituals with bad grammar, to boot. She also tries to protect her from the small-town racism that they encounter, even in Troy.

Moore sets us up to ponder the “meaning” of these non-biological maternal relationships and how they contribute to one’s growing up. It’s fun to peek into Tassie’s midwestern college town and life with Moore as our guide. The details are precisely selected to convey the life there: meth-mommies at Perkins, Kringle from Racine, women who shorten their names to make them boyish and college kids who steal signs for their valuable sexual innuendo.

Giving half-statuses to characters sets the appropriately ambiguous tone in which to ask questions about how to live life and how to choose suitable guides. Even Troy is only half-progressive. Progressive in progress, as Moore might say. And the novel is set in that insecure time between 9/11 and the Iraq war, contributing to the feeling of instability, a perfect era for a book about the first real-growth experiences of college and an investigation into those quasi-identities (identities, after all, that provide the best possibility for growth).

For the Jewish reader, Gail is a particularly sad character. As Tassie experiences the ups-and-downs of life, asking terribly deep questions about the world, God and religion, one wonders about what happened to her Jewish mother. At home, she loiters in the wings and occasionally chimes in when someone yells — but no more than this. Why is she so far in the background? From where does her resignation come? And what happened to her Jewishness?

Scenes of her lonely exile in the Midwest come out through holidays and tragedies. Her inability or lack of desire to communicate any meaningful sense of Judaism to her daughter makes one wonder how all this could have been different. Little did Moore know that her book might be used as a case study about intermarriage and midwestern cultural loneliness? Not because Tassie turned out poorly by any means, just the opposite. The casualty is her mother.

Sometimes we are left to infer the problems between mother and daughter: “I liked my father,” Tassie says explicitly soon after a scene with her mother in the kitchen. Elsewhere, she is more to the point: “My mother’s love was useless” and “It was a beautiful thing, having a little girl in tow. Why hadn’t my own mother known?” The worst that is made explicit is that her mother would swat Tassie’s hands when she would twist at them but there is a larger problem than an occasional swatting.

Like the garden at their house, Tassie’s flourishing seems to correspond with her mother’s non-involvement.

Throughout the book, Tassie’s mother punches in with comments, but there is nothing sustained, and nothing substantial about her — similar to Jewishness itself in the book. Neither provides any comfort or meaning. There is hardly a single tender scene between Tassie and her mother in this book about mothering. And Tassie remembers her mother for the unmotherly things she says, void of the nurturing and sustaining tenderness one might expect. The first thing reported in her voice is strikingly uncaring and “unJewish” as Tassie herself points out:

“As long as the place was moderately fire resistant, I’d deposit you anywhere.” Tassie remembered her saying, “I wasn’t going to worry and interfere with you.” She was the only Jewish woman I’d ever known who felt like that.

Tassie’s mother had married Bo Keltjin, thinking that he was going to live like the son of an academic and that there was money in the family, but instead he became a farmer of gourmet potatoes. Bo painted the barn blue and white and Tassie said that she assumed that the colors pleased her mother because “they reminded her of Hannukah and Israel, though she professed to despise both.”

Gail’s Jewishness rears up in awkward ways: when she makes latkes for the family on Christmas to eat under the Christmas tree, which they call Hannukah hemlock. And when Christianity pops into the family, her mother polices it away, insisting that Bo “knows nothing about the goyim.” And when Tassie toasts Jesus, she “looked at [her[ from a great and concerned distance.” But no more is said.

This is not the first time that Lorrie Moore has portrayed Midwestern Jews. In “The Jewish Hunter,” Pinky Eliot, the forty-five year old Jewish farm lawyer, is dumb but sweet. He says Wadsworth instead of Wordsworth, but nonetheless he manages to touch the sophisticated New Yorker, Odette, the right way so she lets him stick around for a while.

When explaining to Odette how he got his scar, Pinky said:

I was in high school. Some guy called me a Jew, and I went after him. But I was clumsy and fat. He broke a bottle and dragged it across my face. I went home and my grandmother nearly fainted. Funny thing was, I had no idea that I was Jewish. My grandmother waited until the next day to tell me.

The weirdest thing about Pinky, apart from the fact that he was a hunter and we have to watch him dopily kill a deer, was that he liked to watch a videocassette about Holocaust Survivors after he had sex. But we learn that this is because his parents had died in the camps and it seemed to be a way to bring them close. What would ordinarily be a sign of rot, somehow becomes tender.

And that’s true for Tassie too. From a traditional standpoint, Tassie’s Jewish identity is a mess. She says things like, “Judeo-Christian” and doesn’t really seem to understand the offense when her boyfriend qualifies a compliment about her with “especially for a Jew.” She makes innocuous Hitler jokes, but it fails to register when she hears a joke about the gas chambers. It’s a distinction American Jews in the 21st century make: between war and holocaust, icon and tragedy.

But from a non-traditional standpoint, the most interesting way to view identity is that of redemptive context. She appreciates how black mothers hold their children close, she points out how “in every book there are white spaces” and she likes to bite into the bruised parts of fruit, because that is where they are best. The rotten is turned tender.

And Tassie understands, not in a debilitating way, which we might ascribe to her mother, that deep-seated need to get back home. True, she attributes it to feeling like a stranded half-alien and not a half-Jew in exile, but the feeling is expressed nonetheless. Similarly, by the end of the book, she has acquired the essence of religion, that which she points out in Rumi as “the absence of the beloved entering all his cravings.” For in having experienced profound absence, she seems to be the sort who will find herself craving presence.

Not long before the book ends, Tassie expresses a central but underlying cultural sentiment of the book — that the Midwest is no place for a nice (half) Jewish girl. That is, one like her:

And then suddenly, it seemed to me that New York was where half-Jewish people had to go and where I would go too someday. Even though, as Sarah once said, on every corner they sold pretzels dotted with the kind of salt used here to de-ice driveways.