Brooklyn Nets Back in the ‘Hood 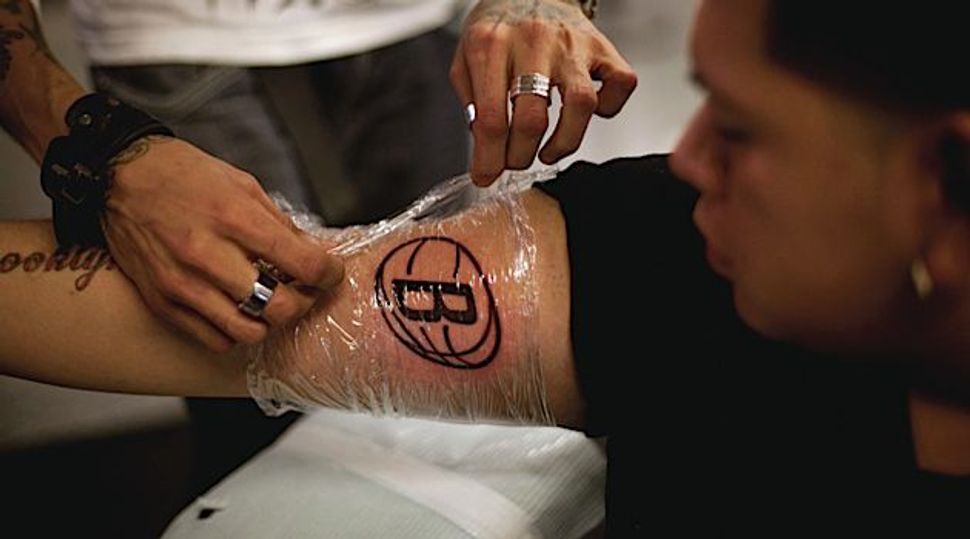 Tattoo You: From the era of baseball?s Dodgers to the arrival of basketball?s Nets, sports has been an indelible aspect of growing up in Brooklyn. Image by Getty Images

For some, The Nets’ arrival in Brooklyn is a religious experience. After a 55-year exile, “the folks on the stoop” (as Brooklynites are designated in an NBA promotional video) have been granted a sports franchise. With the Nets now on Atlantic Avenue, borough president Marty Markowitz has claimed to see “the ghosts of Ebbets Field departing,” taking with them a half-century of tears and the heartache of betrayal. For Markowitz and his kindred, the team’s arrival suggests that prayers do get answered, that devotion — and patience — are rewarded.

As fate would have it, the longed-for Dodgers stand-ins are confessedly Brooklyn-spirited and the borough will not have to adjust its iconic swagger. With its multiple owners — one, Jay-Z, a black rap mogul from Bed-Stuy — the sole Brooklyn franchise seems eager to assert a fresh urban attitude. Not everyone has been impressed. Phil Mushnick of the New York Post drew attention to the Nets’ new color scheme and was criticized for his racist rant about it. What a shame. By heralding neighborhood and loyalty, the Nets’ bold outlook should appeal to blacks and Jews alike. Both cultures have suffered countless indignities, both have flourished in the County of Kings and both relish similar community values. Within hip-hop’s bravado lies a fiery Jewish soul — downtrodden, bullied, ready. Consider Adam Yauch of the Beastie Boys.

The allure of Jay-Z — like that of professional athletes — is his exploitation of graphic imagery to evoke powerful emotions in his enthusiasts. Sure, some hip-hop language is vulgar, misogynist and racist, but its message can be motivational, educational and inspirational. Organized sports are sometimes violent, always aggressive and fiercely competitive (and bigoted and sexist), but they are cherished for the invaluable lessons they are said to impart.

Owing to its unhurried pace and lack of physical contact, baseball is the most elegant of professional team sports. There is a reason New York University offers a course entitled “Baseball as a Road to God” and not a similar one about football, basketball, hockey or soccer. There is no Ken Burns documentary about any other Great American pastime; no “Casey at the Bat”; no “Who’s On First?” for the NFL, NBA, NHL or MLS. When the Nets say “Hello Brooklyn!” and hail “tradition” in their promotional video, the spirit conjured is of the Dodgers and Jack Roosevelt Robinson. 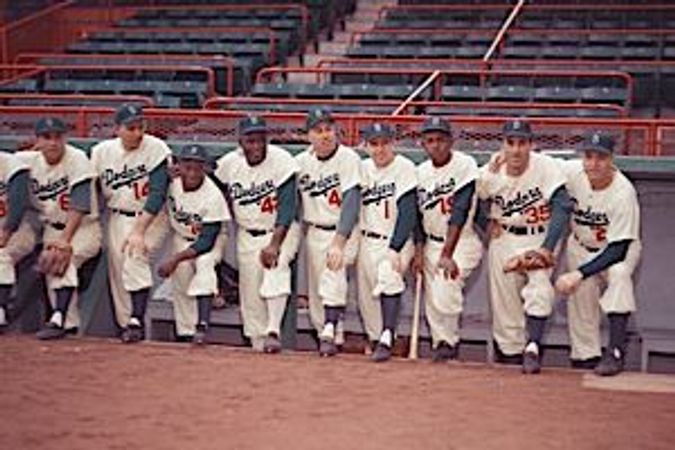 Before The Fall: The Dodgers, circa 1954. Image by Getty Images

For some Big Apple Semites, religion and sports are tastefully combined in a cholent of symbolic meanings. My father, a tribesman from East Noo Yawk (Berriman and New Lots), speaks often and emphatically of baseball as a religious metaphor. To him our national pastime is inherently Jewish and “Dem Bums” were a nine-man minyan. “Baseball’s lack of boundaries — both in time and space — reflect God’s infinite nature,” my father will preach to anyone listening (and sometimes to anyone at all). His “baseball as an expression of the divine” postulate includes such gems as relating the exquisite distance between bases to divine providence. I once suggested that Ted Williams’s observation that those who fail “only” seven times out of 10 attempts will be the greatest in the game serves as consolation for devotional lapses. Father heartily agreed.

My bloodline is not alone in turning to baseball for immortal truths. Nota Schiller, in a lecture entitled “The Jewish Metaphysics of Baseball,” claims that uniform infields correspond to the uncompromising Written Law and dissimilar outfields to the plasticity of tradition. Schiller also shares my impression that baseball is alone in determining triumph by returning home, an achievement that has defined Jewry for millennia. George Carlin’s reflection that only a baseball manager dons the same uniform as his players mirrors the Psalm “I will be with him in trouble.” God, like a faithful skipper, stands by his team.

Significantly, both my father and Schiller are proud Brooklynites whose explications were made venerating the hapless Bums. While baseball’s overall Jewishness is not team-specific, their theories were developed on Brooklyn playgrounds in part because the Dodgers themselves were plainly Chosen. Rooting for the Dodgers meant embracing their underdog status; years of Bomber conquests made philosophizing de rigueur. Like Ladino and Yiddish, Dodger patois provided its speakers with pride, longing and certainty in an unforgiving world. While the Bronx whooped, Brooklyn wept, “Wait till next year,” like “Next year in Jerusalem” and “We shall overcome,” became a slogan of character and courage. As exile recurred, redemption was reassured. The pinstriped conquerors were quintessential goyim whose victories made stronger believers. When a young Roger Kahn, author of “The Boys of Summer,” beseeched his father, “If the Dodgers had all these good players, why is it that Brooklyn never wins the World Series like the Giants and the Yankees?” he was voicing the Brooklyn version of “

[16]” a question more sustaining than its answer.

In Brooklyn, where huddled masses and folks on the stoop organized into functionally integrated communities, family, loyalty and disappointment went hand in hand. The immigrant life was neither lonely nor grand. Brooklynites of every color wanted more than they had and baseball helped to ease tension by providing a common center of identification. Under the El and on beaches of Brighton and Coney, over fizzy U-bets and lemon ice, unsung laborers — Italian, Russian, Irish, Polish, German, Jewish, African and Hispanic — sweated through muggy Augusts thirsting for an October pennant. Now, when the Nets trumpet “neighborhood” and “loyalty,” they signal a Brooklyn ethic born of working-class obligations, aspirations and desperations. The Nets join generations of Brooklynites defined more by yearnings than attainments, more accustomed to numbness than the warmth of dreams fulfilled.

The Dodgers enjoyed a disproportionately Jewish fan base not only because their borough’s males were disproportionately circumcised. Jewish youth flocked to Ebbets Field because Dodger pathos was familiar to them from shul. Jewish people were not used to winning and identified strongly with the underdog spirit. According to the psychologist Arthur Janov, mirror neurons in our premotor cortex fire during the performance of an act and when witnessing that same act performed by others. We identify with our team’s performance, says Janov, because we neurologically feel precisely what the players feel. Janov’s Primal Therapy method asserts that re-experiencing repressed pain allows us to reduce suffering by freeing us from its tyranny. Rooting for the Dodgers, to Janov, was a therapeutic endeavor, allowing Jews — and Blacks — an opportunity to access and to integrate their unprocessed legacy of humiliation and sorrow.

Basketball is not baseball, but by taking a bite of the Apple and invoking Dodger ethos, the long humiliated Nets appear to be embracing their Jewish neshama. Rather than suffer as luckless goyim, the franchise will subsist as ordinary Jews, eschewing front-runner fantasy for edgy, underdog destiny. With a brash Jewish developer, rap mogul owner and gutsy, prophetic vision the Nets have arrived home. By trading their pompous red, white and blue for more unassuming hues the Nets appear humbly optimistic. As for what happens when “this is next year,” when “our mouths are filled with laughter,” when we finally “overcome?” Fuhgeddaboudit!

Brooklyn Nets Back in the ‘Hood