Why ‘The Goldbergs’ Is the Worst Thing To Happen to Television 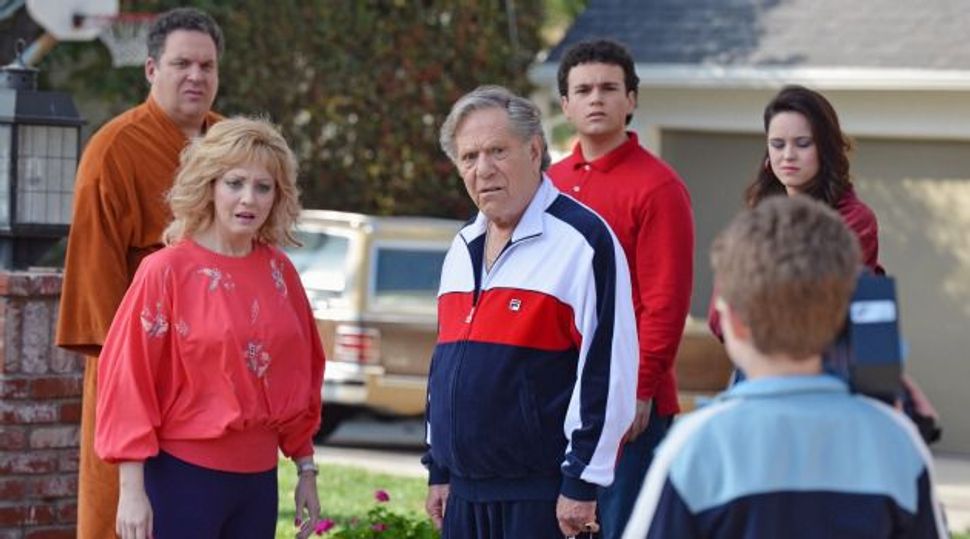 A Touch of Crass: George Segal is just one of the stars wasted on the ABC sitcom ?The Goldbergs,? which concerns a Jewish family in the 1980s. Image by ABC Television

I might be the worst possible audience for “The Goldbergs.” It’s not that I grew up in the ’90s, and the show — an ABC sitcom that just finished its first season — is all about the ’80s.

And it’s not that, having grown up without a TV, many of the show’s references would be lost on me regardless. It’s that I can’t stand the kind of nostalgia the show demands, whether I’m the target audience or not.

“The Goldbergs” is the creation of producer and writer Adam F. Goldberg, and it’s presented as a quasi-autobiographical reflection of his own family and childhood. The main character is 11-year-old Adam Goldberg (Sean Giambrone), an aspiring Spielberg who enjoys videotaping his family’s most embarrassing moments. The show also stars Wendi McLendon Covey (of “Reno 911!”) as Adam’s mother, Beverly; Jeff Garlin as his father, Murray; Troy Gentile as older brother Barry, and Hayley Orrantia as older sister Erica. Then there’s George Segal as the flamboyant, womanizing grandfather Albert Solomon, otherwise known as “Pops.”

Unfortunately, the cast’s talent is wasted on the worst tendencies of a network show. The plots are “family issue” day-olds, the characters are cardboard — Murray especially, with his loud-but-loving ways, is little more than a live-action Homer Simpson — and the jokes are hardly jokes at all. (The best one might be that Murray’s furniture store is called Ottoman Empire.) Despite Goldberg’s attempt to present the Goldbergs as a weird but lovable clan, they are entirely white-bread.

Bad as the show is, however, judging “The Goldbergs” by ordinary criteria misses the point. As a family sitcom about the ’80s, “The Goldbergs” recalls family sitcoms from the ’80s, like “Married With Children” or “The Cosby Show.” But “The Goldbergs” is not a pastiche of ’80s television, nor is it like “That ’70s Show” (or “That ‘80s Show”), whose teenage audience never experienced the decade in question.

Instead, “The Goldbergs” is for people who remember the ’80s, but who now expect something more sophisticated from a sitcom. Thus, with an “Arrested Development”-like narrator (Patton Oswalt, as the grown-up Adam Goldberg), a single-camera set-up, and the absence of a laugh track, “The Goldbergs” isn’t a look at the sitcom through the lens of the 1980s, but a look at the ’80s through the lens of a 2013 sitcom. In this case, unfortunately, that means a heap of phony nostalgia.

In fact, “The Goldbergs” reminds me less of other TV shows than it does of that other cultural marker of our time, the listicle. Want to know what “The Goldbergs” is about? Search for the 1980s on Buzzfeed. You’ll come up with acid wash jeans and Dayglo windbreakers, rotary phones and fanny packs. On the “The Goldbergs” there’s all of that plus Reebok Pumps and “Poltergeist” (both of which have entire plots dedicated to them), “Alf,” “Ghostbusters” and the Rubik’s Cube. The first episode starts with a voiceover homage to the decade of “E.T., Mr. T. and MTV.” As if all anybody did in the ’80s was watch television.

You could see why this might seem like a good idea — who doesn’t want a whiff of the old days now and then? — but “The Goldbergs’” effort to be a gif that keeps on going doesn’t connect. Unlike listicles, the recitation of “remember this?” and “remember that?” doesn’t work in a sitcom format. A rundown of “50 Things Only ’80s Kids Can Understand” or “26 Things You Miss About Landlines” lets readers fill in their own associations — where they were and what they were doing when Betamax gave way to VHS or they experienced the death of Optimus Prime. But when these references are embedded in a TV show with plots and characters and other bits of narrative tissue, the appeal to identification fails. “The Goldbergs” has too much stuffing to be a listicle, and too little humor to be a good sitcom.

Not to its credit, “The Goldbergs” doesn’t just try to dazzle its audience with flashbacks from childhood; it also tries to connect with them now. Most of the show’s plots revolve around the Goldberg children growing up and their parents’ difficulties dealing with dating, driving, parties and the rest of that jazz. The show doesn’t offer anything original here, but it’s worth noting that someone who was born in the ’70s and was a teenager in the ’80s would be in their 40s now, and could very well be dealing with the same parenting issues facing Murray and Beverly Goldberg.

In other words, “The Goldbergs” tries to get you coming and going. I’m not sure for whom this technique works exactly, but for me it really doesn’t. Granted, I’m not the right demographic. But if I were, I think I’d be even more repulsed. I’d like to imagine that my identity is about more than a handful of movie references, or crude stereotypes about parenting. Sure, I read listicles too, and enjoy them sometimes. But I wouldn’t say that listicles — or TV shows aspiring to be listicles — speak to me. For that, they’d need to have something to say.

Why ‘The Goldbergs’ Is the Worst Thing To Happen to Television