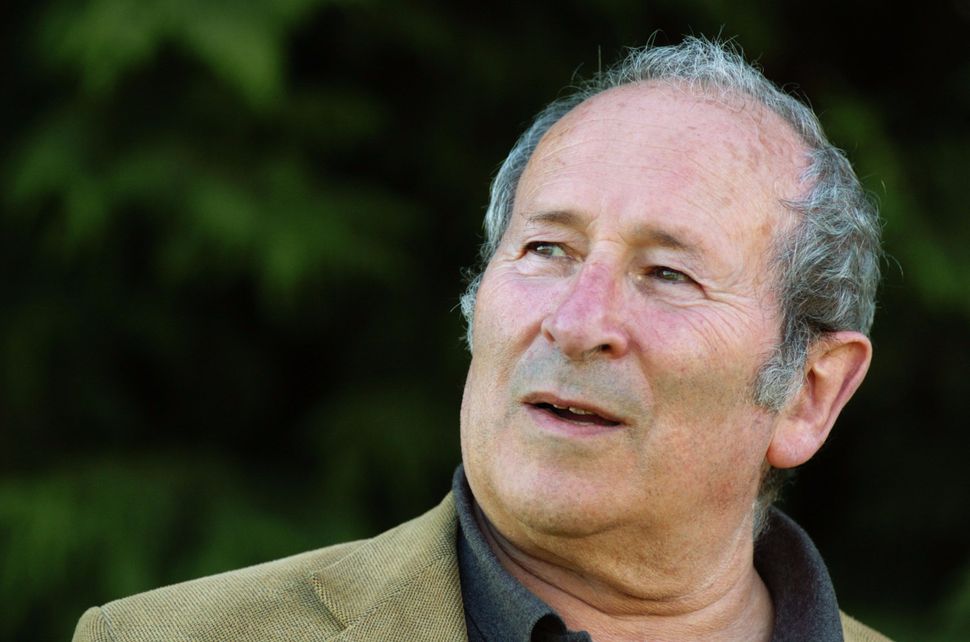 Requiem for a Playwright: Arnold Wesker has died at the age of 83. Image by Getty Images

Arnold Wesker, the British Jewish playwright who died on April 12 at age 83, might have been the most ardent explorer of the kibbutz ethos in English theatrical history. In his explicitly back-to-the-land play, “I’m Talking about Jerusalem” (1960), Ada Kahn, daughter of the Jewish family featured in an earlier play, “Chicken Soup with Barley,” (1956) moves to Norfolk to struggle as a farmer, amid much kibitzing from her mishpocheh. Wesker’s own Hungarian mother Leah Perlmutter and Ukrainian father Joseph struggled in working class jobs with undaunted hopes for the betterment of mankind. “Chicken Soup with Barley” starts with the Battle of Cable Street, the 1936 fight between London police, the British Union of Fascists led by Oswald Mosley, and Jewish anti-fascists. At a public event during London’s Jewish Book Week 2003 Wesker recalled his family’s ardent Communist beliefs, expressed in books and records collected at home. Referring to Itzik Feffer, a Yiddish poet murdered in 1952 during a Stalinist purge known as The Night of the Murdered Poets, Wesker stated:

“There were violent political discussions [at home] because not every aunt and uncle was a member of the Communist Party. ‘Whatever happened to Itzik Feffer?’ is what I remember one aunt screaming at my mother. So that there was an atmosphere in which politics, literature and a life of the spirit as well as political consciousness was lived.” For Wesker, “Chicken Soup with Barley” was about the “disintegration of a family and a circle of friends, set against a background of the disintegration of an ideology.” When Soviet troops suppressed the Hungarian uprising in 1956, Ronnie Kahn vehemently criticizes his mother in “Chicken Soup” for retaining her utopian beliefs.

The alternative to such optimism was clear in Wesker’s other labor-intensive plays. In “The Kitchen” (1957), set in the basement of a large restaurant, tragic love and violence overwhelm routine chores. In “The Journalists” (1972) loathsome deeds occur in a newsroom crawling with print media hacks. According to Wesker, “The Journalists” portrays the Fourth Estate as a “metaphor for the Lilliputian mentality that denies, diminishes, and leads finally to self-destruction, or self-loathing at best.” By contrast, idealism and belief in personal growth exemplified in social movements such as kibbutzim and moshavim added backbone to Wesker’s artistic message.

Not by coincidence, Wesker’s official website lists as his first published work a poem from 1946, “Wait O Aretz,” later qualified by the author as “dreadful.” It was published in “Iton Habonim,” the magazine of Habonim Dror, the movement founded in 1929 in London’s East End of London by Major Wellesley Aron (1901–1988) to give Jewish children a strong grounding in Yiddishkeit and the importance of Israel.

In a 2002 article for “The New Statesman,”, Wesker recalled his initial reaction in 1948 to the establishment of the State of Israel:

“In the beginning, when I was 16, I was cynical. A Jewish homeland? Ha! We’ll all be in one place and it’ll be easier for them to get rid of us forever. But it didn’t stop me dancing into existence the new state of Israel. We linked arms and danced a Hora outside the Kingsway Hall in Holborn, London, 1948.”

A comparable humanizing goal animated Wesker’s “The Merchant” later retitled “Shylock.” Returning to Shakespeare’s original sources for “The Merchant of Venice,” Wesker created a new Shylock trapped into demanding a pound of flesh as bond from a friend to protect the legal security of his Jewish community. This benevolent Shylock is delighted when he and his debtor are let off the hook. “The Merchant” was overshadowed by the untimely death in 1977 of its star, Zero Mostel, while still on the road in Philadelphia before a scheduled Broadway opening. Episodes of ill luck subsequently pursued Wesker’s writing career, perhaps not helped when in 1988, the American comic strip creator Norm Breyfogle and colleagues decided to name an adversary of Batman in the DC Comics Universe Arnold Wesker. Copying this initiative, in 1996 the Japanese video game “Resident Evil” dubbed its archvillain Albert Wesker. Apparently oblivious to such dubious homages, the playwright was more concerned with getting his recent works staged, an ever-greater challenge. His early plays remained favorites of repertory companies. Wesker’s handful of ever-popular plays seemed to confirm his mother’s upbeat views for his future.