‘Mozart in the Jungle,’ An Italian Jewish Celebration, and 5 Other Things to Watch, Read, and Do This Weekend 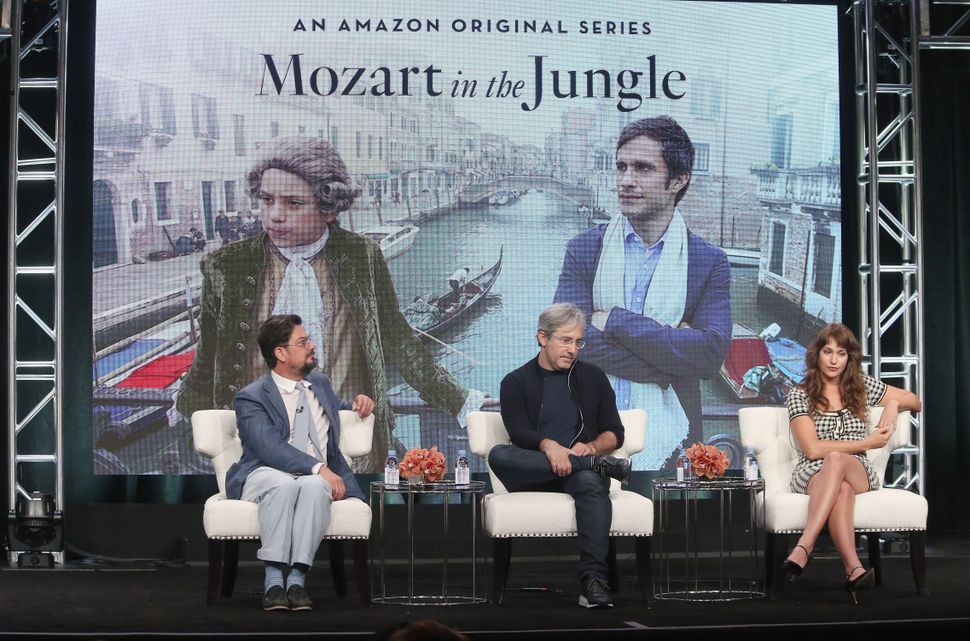 Hanukkah is coming, which means, for many, some serious winter nesting. Before you huddle up for the holiday, partake in some of the last best moments of Jewish culture in 2016.

1) Binge on theater, new and old

This week and next herald the openings of Tony Award-winning playwright Richard Greenberg’s new play “The Babylon Line” at Lincoln Center Theater, the new Israel-set musical “The Band’s Visit” at the Atlantic Theater, and increasingly high-profile director Sam Gold’s star-studded interpretation of “Othello” at the New York Theater Workshop. Before stepping out for Greenberg’s play, make sure to read his recent long, rambling chat with the Forward’s Adam Langer.

The third season of “Mozart in the Jungle,” the creators of which include Jason Schwartzman and Paul Weitz, premieres on Amazon on December 9. In its first season the New York Times’s Zachary Woolfe called the show, based on a memoir by oboist Blair Tindall “sexed-up, druggy, lovably daffy and patently fictional” and expressed joy at “how true its depiction of the classical music industry rings.” Based on previews, season 3 holds more romance, drama, and sheer loveliness, accompanied by a healthy dose of humor.

In the late 1960s, rabbinical student P. Allen Krause interviewed twelve Southern Reform rabbis about their understanding of and relationship to the Civil Rights Movement. He promised he wouldn’t make the interviews publicly accessible for 25 years, and worked on assembling them into a thoroughly contextualized collection until his death in 2012. This week, that collection – completed by Krause’s son, Stephen, and historian Mark Bauman – arrives as “To Stand Aside or Stand Alone: Southern Reform Rabbis and the Civil Rights Movement.” Krause couldn’t have anticipated his work would be published at a time when racism, bigotry, and discrimination have returned to the forefront of our national consciousness. As we consider our way forward, it’s lucky for us that it has.

4) And celebrate 40 years of women in the American rabbinate

Thursday, December 8th, Chicago’s Am Shalom hosts a reflection on the history of women in the American rabbinate. The conversation will feature Rabbi Sally Priesand, the first woman rabbi in the United States, Rabbi Debra Newman Kamin, the first woman rabbi in the Chicago area, and Rabbi Rebecca Einstein Schorr, who edited the recently released anthology “The Sacred Calling: Four Decades of Women in the Rabbinate.” Politically, that highest, hardest glass ceiling may not have been shattered; religiously, the ability of women to become rabbis remains a recent development, and one worth celebrating. Also in Chicago, spend Sunday, December 11 celebrating Jewish Book Month and Russian Jewish Culture with the Spertus Institute as it hosts Irina Reyn, award-winning author of “The Imperial Wife” and “What Happened to Anna K.”

The Jewish Community Center of Northern Virginia plays host, this week, to two events reviewing Italian Jewish culture. Saturday, the Center hosts the musical extravaganza “Cantata Ebraica: The Music of the Italian Jews,” a performance guided by Hazzan Dr. Ramón Tasat, and Sunday, December 11 brings a screening of “The Venice Ghetto: 500 Years of Life,” accompanied by a wine tasting and selection of Italian sweets. Should you be inclined more towards the surreal than gustatory pleasures – that’s a sentence I never thought I’d write – spend Saturday at Kafka scholar Elizabeth Rajec’s lecture “Kafka: The Man Who Defined a Nightmare” through Smithsonian Associates.

Los Angeles residents have the chance to see two greats of Jewish comedy this weekend: Sandra Bernhard and Lewis Black. At the Wallis Annenberg Center for the Performing Arts December 8-10, Bernhard delivers her “Sandra Monica Blvd: Coast to Coast,” a timely quest for the always-surprising “soul of America.” No word on Black’s subject matter when he takes the Orpheum Theater’s stage December 10, but given that he’s described on his own website as “the king of the rant,” go expecting a thoroughly enjoyable, thoroughly impolite verbal barrage.

‘Mozart in the Jungle,’ An Italian Jewish Celebration, and 5 Other Things to Watch, Read, and Do This Weekend