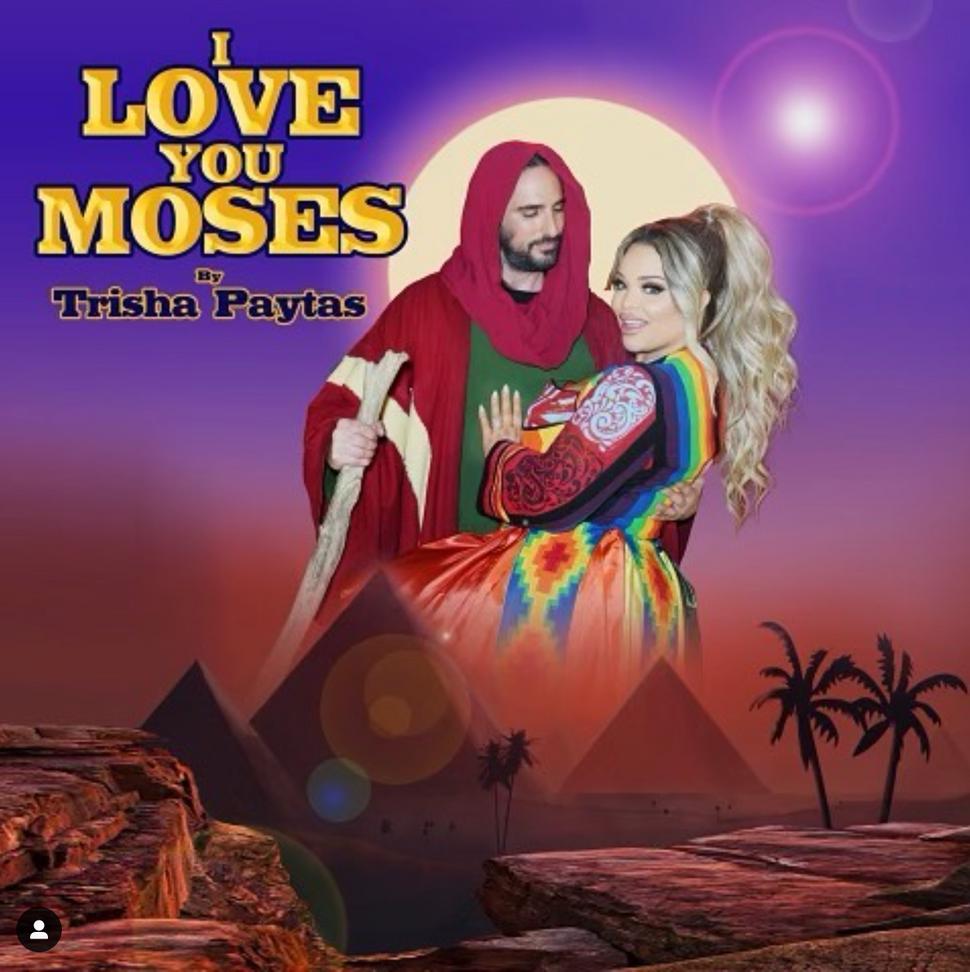 If you haven’t heard of Trisha Paytas, I recommend you stop reading here and continue on in blissful ignorance.

If you follow the ever-controversial Youtube-TikTok-social media figure, you will be unsurprised by her new music video release. Titled “I Love You Moses,” it is part Passover banger and part love song to her Israeli fiancé, Moses — who plays, well, Moses in the video — and is full of cheap biblical costumes, a plastic camel, and topped off with some nearly unintelligible Hebrew.

For those of you who are familiar with Paytas, but need some context for why in the world she would be making a Passover song, allow me to catch you up.

Paytas has had many phases and identities; as Rebecca Jennings wrote when she profiled Paytas for New York magazine, the Youtuber “has spent the last decade and a half trying on different identities to see which ones will make her the most famous.” This has included coming out as trans, which was not received well given that she had identified as a chicken nugget not long before. Trolling her way to stardom has worked, though, with 6 million followers on Youtube and 5.3 million on TikTok — though she is perhaps more infamous than famous.

The identity du jour of late has been Jewish. Paytas has been called out numerous times in the past for antisemitic statements, but apparently she is now a member of the tribe herself — kind of.

Paytas recently made a video for her podcast, “Frenemies,” in which she wore a pink tallit and claimed that “Holocaust aside, I do know Jewish history very well.” She then asserted that Anne Frank survived the Holocaust and talked about her love for Jesus, calling herself a “Jew for Jesus.” Those are mere samplings from the first seven minutes of the two-hour episode, just to give you a taste of the chaos.

This new Jewish identity may spring from Paytas’s engagement to Moses Hacmon, the Israeli brother-in-law of her podcast co-host. The engagement was announced via a desert photoshoot, featuring a sort of fetishized Middle Eastern “I Dream of Genie” costume theme. Hacmon now features in many of her videos, often trying to teach Hebrew phrases to Paytas. She butchers it; he smiles beatifically.

This brings us back to “I Love You Moses,” in which Paytas twirls through fake desert scenery. There’s palm trees, a dress that seems like a hat tip to “Joseph and the Technicolor Dreamcoat,” and a bouncy dance beat that keeps things moving. Hacmon, simultaneously playing himself and the biblical Moses, wears a red cloak and looks bemused as he spins Paytas.

“Smear the blood, pass over us, Moses the voice of God,” Paytas sings, before breaking into the chorus: ”Moses, I love you Moses. You freed the slaves, and you freed my soul — Moses, never let me go.” She then repeats the same thing — more or less — in Hebrew, though her inability to pronounce a chet makes the word for “freed” sound more like “lied.”

Sexualizing the biblical Moses is disconcerting enough. But she also gets the holiday wrong. “Now when you sit down at the Seder, let’s take away that we must always tip the waiter,” she sings, as the assembled cast rip into a challah. Yes, a challah.

Didn’t she Google what a Seder is before including it in her video? Of course not, which is on par with Paytas’s Jewish engagement thus far. (Why Moses — the real life one — didn’t mention that we eat matzah on Pesach is a different question.)

But actually more problematic than anything in the video is the fact that in 2017, Paytas released a very similar song called “I Love You Jesus.” So similar, in fact, that they have the exact same tune.

“DID SHE PARODY HER OWN SONG?! I CANT,” read a comment on her TikTok, soon after the Passover version dropped. (Paytas is such a masterful troll that it’s impossible to tell.)

“Though I strayed far, here you are, Jesus my superstar,” goes the leadup to the chorus in the original version. “Jesus, I love you Jesus. You give me reason, you give me hope — Jesus, never let me go.” That’s right, she did not even fully rewrite the lyrics for the Passover version; she may have even used the exact same backing track.

This all makes sense for Paytas, who used to identify as strongly Roman Catholic and clearly does not see any conflict between her Christianity and her new Jewish identity. Besides, she is too new to Judaism to have had time to write a whole new song.