No, she wasn’t Jewish, but Betty White had a very Jewish century 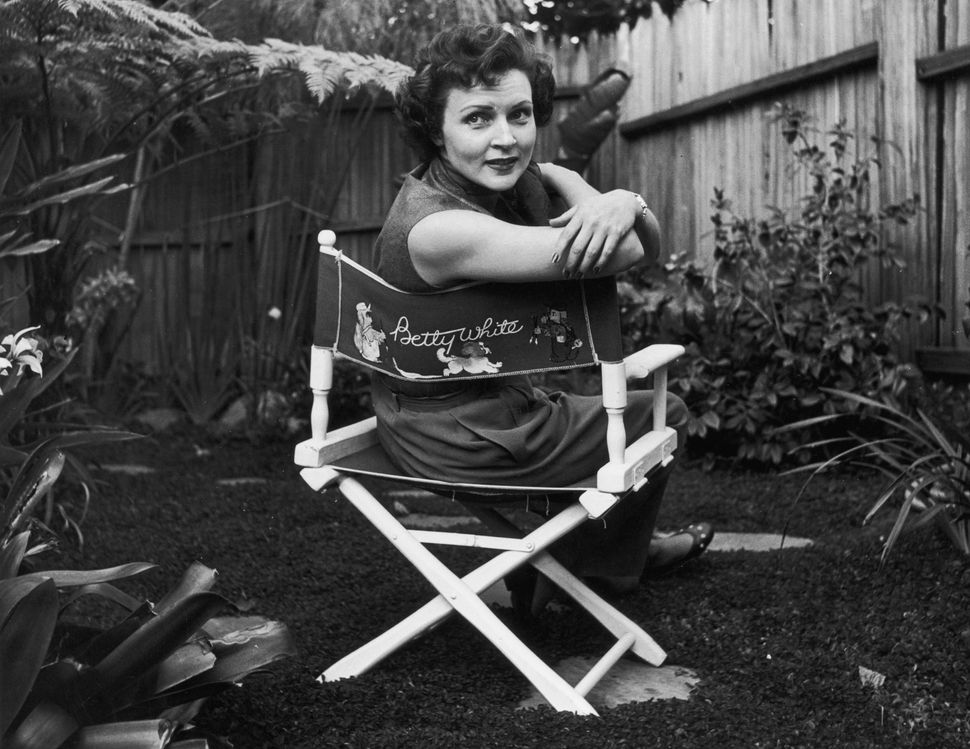 Chairman of the Board: In 1952, White formed Bandy Productions with two colleagues to create new shows using characters from sketches on “Hollywood on Television.” By Getty Images

There was nothing Jewish about Betty White.

I mean yes, she had a blind date with Carl Reiner in 2010 on “Hot in Cleveland” when they were both 88. Yes, she played one of four retired “Golden Girls” living together in Florida, none of whom were Jewish but, y’know. And yes, she was on the “William Shatner Roast” making fun of his expanding girth — “Darling, you were supposed to explore the galaxy, not fill it!” But those are not connections to Judaism; they are the occupational hazards of having spent a century in American showbiz.

White, who died Dec. 31, 2021, at age 99, was featured on the radio before Hitler came to power. She already had her own radio show when David Ben-Gurion read the Declaration of Israeli Independence in 1948. By the time Gamal Abdel Nasser nationalized the Suez Canal in 1956, White had her own television show and production company. She’s been making and appearing on television shows for 70 years and been in people’s homes for each of the past 10 decades (the decade before that, you had to go to the theater to see her).

White was born in 1922 in Oak Park, Illinois, just near the then-new synagogue building of Washington Boulevard Temple of B’nai Abraham Zion (now Oak Park Temple B’nai Abraham Zion) dedicated the previous September. White’s parents moved out to Alhambra, California, in 1923 and eventually to Los Angeles. It was a westward move followed by immigrants, farmers and millions of others in the ’20s and ’30s. In 1924, a fledgling MGM had just been founded when Metro Pictures, Goldwyn Pictures and Louis B. Mayer Pictures merged. Based in Beverly Hills, where White went to grade school, it would become one of the most famous movie production companies in history.

1930 opened with Wilhelm Frick becoming the first Nazi minister in German government. He became the Minister of the Interior and Education in Thuringia Jan. 23, as part of a right-wing coalition. The year ended with eight-year-old Betty White appearing on radio in a heart-warming Christmas episode of a show called “Empire Builders,” as a crippled orphan who befriends a wealthy bachelor at a hospital.

At whatever point you start counting a century of history, it’s also been a rollercoaster time for the Jewish people. During August 1921 and 1922 — directly before and after White’s birth — the Zionist Congress met in Karlsbad, Czechoslovakia, to discuss the future of the movement. Palestine suddenly seemed like a destination for the Jews fleeing pogroms in the aftermath of World War I, given that the League of Nations had confirmed the British Mandate of Palestine and the British government had said they were in favor of a homeland for the Jewish people.

By late 1949, when an independent Israel had finally signed armistices with Egypt, Lebanon, Syria and Transjordan, White had left her own radio show “The Betty White Show” and had begun co-hosting “Hollywood on Television” with Al Jarvis. Jarvis left in 1952 at which point White took over a show in which she would host five hours of unscripted television for six days a week, chatting to the camera, interviewing guests and singing. 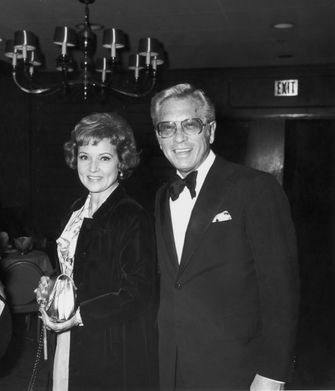 A Formal Affair: Betty White with her husband Allen Ludden. By Getty Images

In 1952, White formed Bandy Productions with two colleagues to create new shows using characters from sketches on “Hollywood on Television.” This met with some success as its low budget sitcom “Life With Elizabeth” (starring White as Elizabeth) ran for two seasons in syndication and won White her first Emmy nomination.

As the owner of one of the first women-owned television production companies, White was in a position to feature Black dancer Arthur Duncan in “The Betty White Show” over the protests of NBC’s southern affiliates. White insisted on this in 1954, the year when Stern College for Women, the “first liberal arts women’s college under Jewish auspices,” opened and when Jack Greenberg was successfully arguing Brown v. Board of Education of Topeka at the U.S. Supreme Court, laying the legal groundwork for the desegregation of American schools.

Throughout the 1960s, White was a regular guest on game shows and talk shows. She made many appearances on the hit quiz show “Password” as a celebrity guest, eventually making the show’s host, Allen Ludden — the love of her life — her third husband. She was so successful as a host that NBC offered her the anchor position on “Today.” She turned it down and the job eventually went to one of its chief writers and frequent guests, the iconic Barbara Walters.

In the weeks after Rabbi Sally J. Priesand became the first woman to be ordained a rabbi in the United States, White uncovered the identity of Milton Berle (born Mendel Berlinger) on the game show “I’ve Got a Secret” created by Allan Sherman. Filming of the show took place immediately after Priesand was ordained by Dr. Alfred Gottschalk, President of Hebrew Union College-Jewish Institute of Religion in Cincinnati, Ohio on June 3, 1972, and the Berle episode aired just after Tisha B’Av, on Aug. 4.

On Sept. 15, 1973, White first appeared on “The Mary Tyler Moore Show,” co-created by Jewish screenwriter James L. Brooks. Although her character Sue Ann Nivens embodies the sweet, enthusiastic persona of “The Happy Homemaker” — the show in which she fictitiously stars — she is actually, as the Nivens Wikipedia page notes, “sardonic, man-obsessed, and very competitive.”

Correlation is definitely not causation but scarcely had White brought Nivens to the screen when an Arab coalition attacked Israel on Yom Kippur — Oct. 6. Israel’s quick victory over the next two weeks coupled with the uncertainty that it would always prevail, led slowly to the 1978 Camp David Accords and historic peace with Egypt.

“The Mary Tyler Moore Show” ended in 1977 and White led another “Betty White Show” for a single unsuccessful season. Though, in hindsight, her years before “The Golden Girls” seemed itinerant, she was working regularly in a world increasingly receptive to women stars. While Menachem Begin presided over the first non-Labour government in Israel’s history, White appeared regularly with Johnny Carson and Carol Burnett on their shows and guest-starred in a number of television movies and miniseries.

In 1983, the year that the Jewish Theological Seminary faculty voted to ordain women as rabbis, White became the first woman to win a Daytime Emmy for Outstanding Game Show Host for her short-lived show, “Just Men.” White would start a car with a key and then drop it into a box of keys. Two female contestants would then try to win keys (and thus the car) by correctly guessing how the entirely male panel (hence the show’s name) had answered various questions. 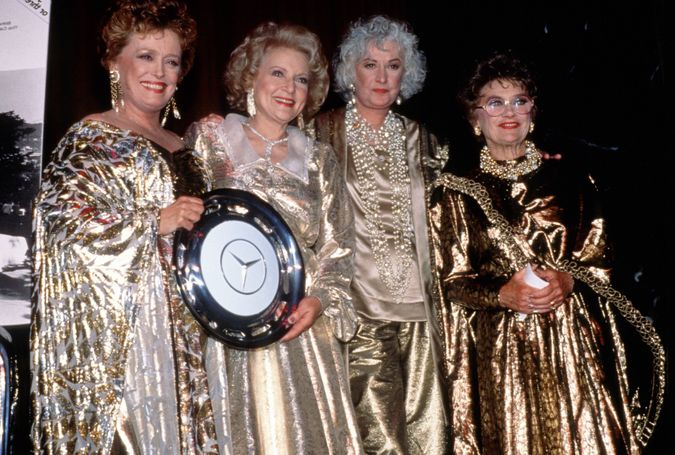 Good as Gold: Betty White with the other stars of ‘The Golden Girls’ By Getty Images

Around that time, Susan Harris wrote a pilot about four Jewish women living in Florida. The network loved it, but told her to change the ethnicities. Originally White was slated to play the role of man-crazed Southern belle Blanche Devereaux, but that felt too much like Nivens redux, so by the time the first episode aired Sept. 14, 1985 White was playing the ditzy, loveable Rose Nylund.

Those who confuse White with her character from “The Golden Girls” do so out of ignorance. She is the only woman to have received an Emmy in all performing comedic categories and has done so over an unprecedentedly long career. She has been a relentless champion of animal welfare as well as women’s rights and equality, starring in two sitcoms that pushed public perceptions of independent women in “The Mary Tyler Moore Show” and “The Golden Girls.”

White was deeply associated with the character of Nylund but she discovered a rich seam of comedy career in upsetting those audience expectations. Though not actually playing blue, the language she used in her roast of Shatner in 2006 reminded people that she wasn’t just a prim and proper relic. Hosting SNL in 2010 — a show created and still run by Lorne Michaels after 46 years — brought her acclaim and back to the center of popular culture.

By 2010, White was such a household name that she starred in the 2010 Snickers bar Superbowl ad. White appeared alongside Abe Vigoda, and won the top spot on the Super Bowl Ad Meter. Checking off her bucket list of iconic American institutions, she met Barack Obama in the White House when she was 90. Her meeting went much more smoothly than the awkward meeting Israeli Prime Minister Benjamin Netanyahu had endured three months earlier with the same president in that same office.

In 2019, at the age of 97, White — alongside Carl Reiner (97), Mel Brooks (91) and Carol Burnett (86) — voiced toys in a scene for “Toy Story 4.” She played the part of a toy tiger named “Bitey White.” Remembering Betty White, I’m reminded of the tag line for the prank show “Betty White’s Off Their Rockers” that ran for three seasons from 2012. In the latter show, silver foxes of all shapes and sizes prank youngsters. “The saying is, ‘Respect your elders,’ there’s nothing in there about us respecting you back.”

No, she wasn’t Jewish, but Betty White had a very Jewish century