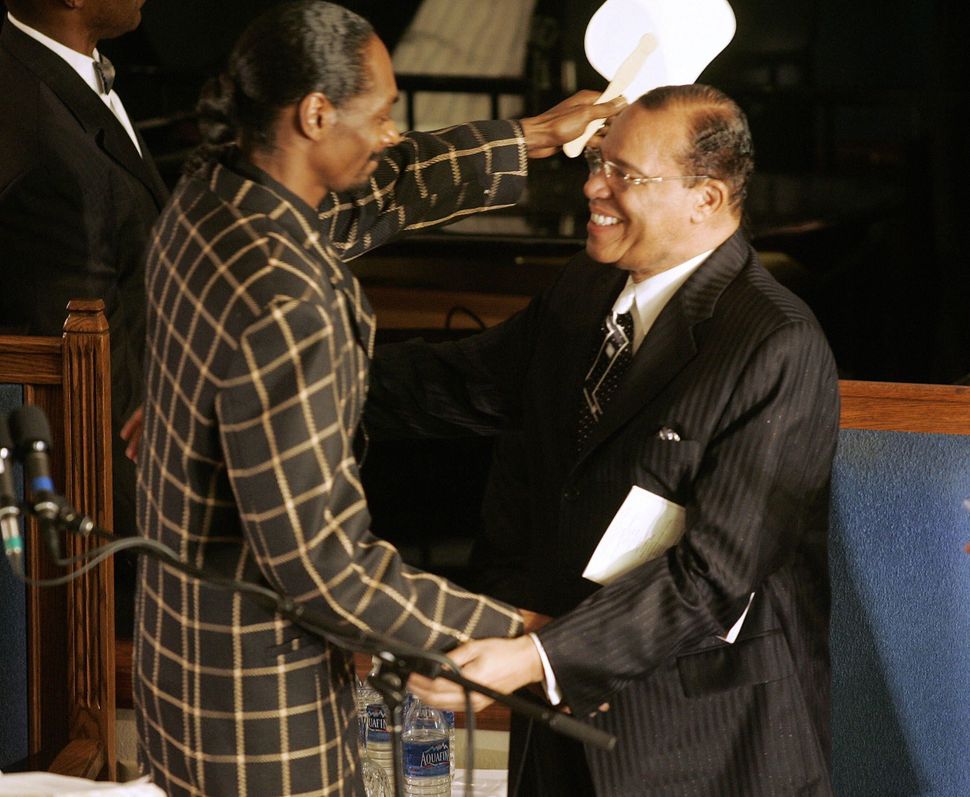 Snoop Dogg and Louis Farrakhan in 2005. Image by Getty

Snoop Dogg is telling his Instagram followers to post videos of Nation of Islam leader Louis Farrakhan after Facebook banned Farrakhan from its platforms this week. Farrakhan was one of several rightist figures, including Alex Jones and Laura Loomer, banned from the social network’s services.

“Put up some Minister Farrakhan footage. Show some love. Show what he really be talking about,” the rapper said in a video posted Thursday. “[They] can’t ban all of us.”

Farrakhan has a history of saying blatantly anti-Semitic things. The Anti-Defamation League considers him a leading anti-Semite in America. His anti-Semitism has been the subject of significant discussion in the Jewish world around the nexus of race and anti-Semitism.

While many have distanced themselves from him due to his history of virulently anti-Semitic, homophobic and transphobic remarks, the Nation of Islam leader often appears at significant public events and progressive leaders such as Tamika Mallory of The Women’s March have rejected calls to censure him.

Farrakhan was one of several far right figures banned from Facebook and Instagram for being considered dangerous and promoting violence. Some have linked Farrakhan’s views to violence against Orthodox Jews by African Americans.

The other accounts being banned include far-right figures Jewish “citizen journalist” Laura Loomer, Milo Yiannopoulos and InfoWars editor Paul Joseph Watson. Paul Nehlen, an anti-Semitic white supremacist who ran an unsuccessful campaign for a Republican House seat in 2016 and 2018, was also scrubbed from the website.