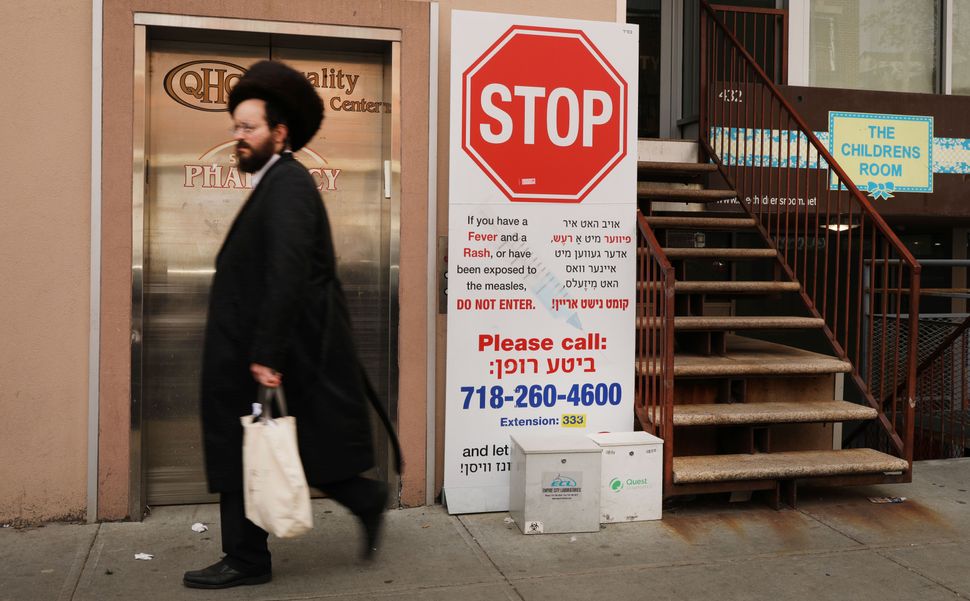 A sign warns people of measles in the ultra-Orthodox Jewish community in Williamsburg on April 19, 2019 in New York City. The neighborhood is a hotspot for infections. Image by Getty

In 2000, the Centers for Disease Control and Prevention (CDC) declared measles “eliminated,” putting the disease in the same category as smallpox and polio. That meant that, according to the CDC, there had been an “absence of continuous disease transmission for greater than 12 months.”

Now, that status is on the verge of being revoked.

This year alone has seen 971 measles infections nationwide, with the majority of those coming from outbreaks in upstate New York and New York City. That broke a record from 1994 that encompassed the total number of infections over a 12-month period. It’s still far from the 1992 measles total, however, a year that had over 2,200 infections.

Furthermore, the disease is nowhere near as deadly and widespread as it was at its zenith, in the 1950s, when millions were infected and hundreds died from the disease each year, NPR reported.

The extreme rates of infection have been fueled by travelers coming back from abroad with the infection from countries experiencing significant measles outbreaks, primarily Ukraine and Israel. Europe as a whole had over 82,000 measles infections last year, according to the World Health Organization.

New York state has seen 550 infections since September, almost entirely within the state’s Hasidic community. That outbreak has been traced to travelers coming back from Israel, which saw over 2,000 measles cases in 2018, also almost entirely within the country’s Hasidic community. The outbreak has spread in the community due to a mix of low vaccination rates for some schools and neighborhoods, crowded living conditions, frequent multi-family gatherings (such as for holidays and Sabbath meals) and mistrust of the government and medical establishment, leading parents to vaccinate children late or behind the recommended immunization schedule.

Hasidic Jews opposed to vaccination have been exposed to anti-vaccine propaganda that mirrors the kinds of anti-vaccine media that secular anti-vaxxers consume.

Recently, New York health officials have pointed to slowing infection rates as a sign of hope for the outbreak in the state. Earlier this year, New York City Mayor Bill de Blasio declared a state of emergency in heavily Hasidic portions of Brooklyn, mandating that people who have not been vaccinated receive fines. Health workers have been offering free vaccines in the affected Brooklyn neighborhoods.

Even as Hasidic anti-vaxxers have publicized their stances, many in the community have expressed fears of a backlash against all visibly Orthodox Jews.