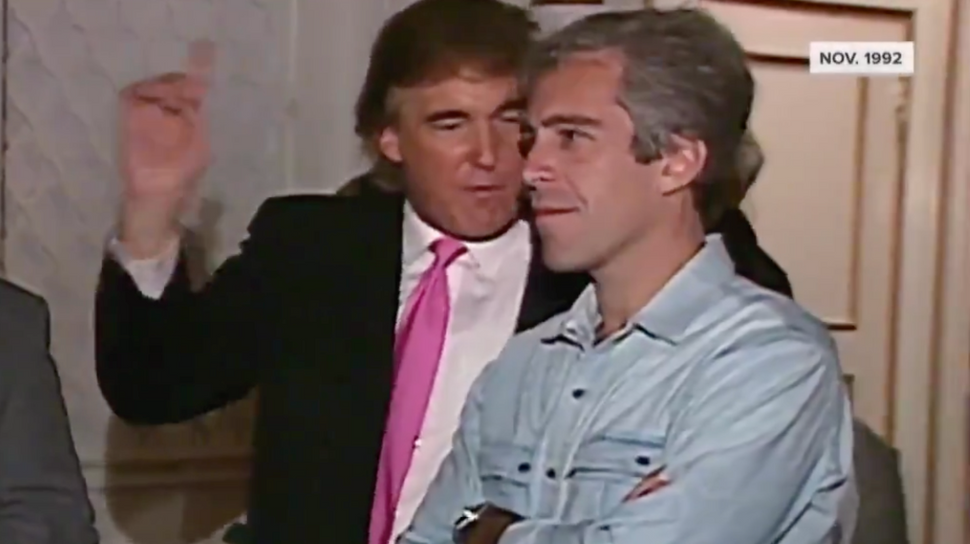 Archived footage showed President Trump and Jeffrey Epstein discussing women at a party at Mar-a-Lago in 1992. Image by NBC News

The footage was captured for a profile of Trump’s then-bachelor life on Faith Daniels’ NBC talk show. It features a party Trump threw with NFL cheerleaders at Mar-a-Lago — then his private residence before it became a resort. Epstein was also there, and the footage shows the two appearing to discuss the women dancing in front of them.

Although their exact conversation cannot be heard over the sound of the music, NBC reported that Trump appears to say, “Look at her back there. She’s hot.” He then added something that made Epstein bend over with laughter.

Epstein pleaded guilty in 2008 to one count of soliciting prostitution from a minor, in a deal with prosecutors that a district court judge declared earlier this year to have been illegal because the details were not shared with alleged victims. He was arrested earlier this month on new charges of sex trafficking.

Trump said last week that he and Epstein traveled in the same South Florida social circles, but that he was “not a fan.” In a 2002 profile of Epstein in New York magazine, Trump said, “I’ve known Jeff for fifteen years. Terrific guy. He’s a lot of fun to be with. It is even said that he likes beautiful women as much as I do, and many of them are on the younger side. No doubt about it – Jeffrey enjoys his social life.”