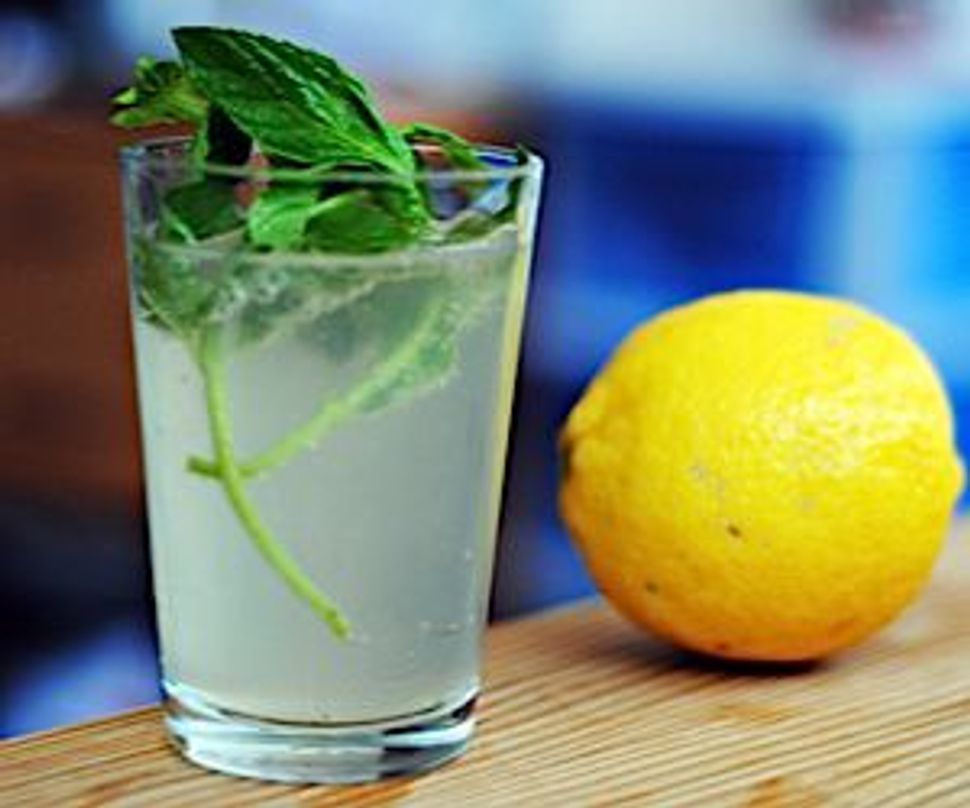 Israelis know a thing or two about the heat. Located in the Middle East, between the Mediterranean and the Dead Sea, amidst desert and blazing sun, summer begins in late April and lasts well into November. A staple of the long summer season is the naturally cooling limonana.

A simple drink, limonana is an innocent combination of lemonade with mint. The Hebrew language loves to combine words for the sake of efficiency and limonana is a perfect example. It melds the words for lemon (limon) and mint (nana), creating a fun new word in the process.

Besides its playful name, limonana also has a humorous origin story that dates back just 20 years, to the early 1990s. According to Israeli food expert and writer Janna Gur, the now ubiquitous beverage was the result of a fake ad campaign by Fogel Levine, one of Israel’s leading ad agencies. They put ads on the sides of buses advertising a beverage called “limonana ” and “they managed to generate huge buzz before revealing that it was a fictitious brand.”

The purpose of this stunt? To demonstrate the effectiveness of their bus advertising. The unintended result, however, was that the drink began to pop up all over restaurant menus and soon was produced commercially. Quickly limonana became a mainstay in the Israeli beverage canon. “The combination of lemon and mint,” says Gur, “makes such sense that one wonders how come nobody had thought about it before.” The herb grows like a weed locally and is a staple flavor of Israeli cuisine.

As soon as the weather heats up, limonanas are everywhere. In the shuks (open air markets) it’s available in large containers for a mere two shekels (about 50 cents) per rejuvenating cup. Every cafe and restaurant offers it, and it’s available in bottle form alongside apple and orange juice. You’d be hard-pressed to find lemonade without mint in Israel.

Another popular way to enjoy a limonana is as a blended beverage. Bright green and frothy, the mint lemonade is blended with ice to create a thick, brain freeze-inducing smoothie. Cold and super sweet, they provide just the sugar rush needed to beat the heat.

Although limonana has inexplicably not caught on internationally, it is available at a few places stateside. Israeli coffee chain Aroma, which has stores in New York, Florida and Canada, offers limonana. Even better, it’s remarkably easy to recreate at home. For the most basic version, simply muddle a big handful of mint in a large glass of lemonade (preferably homemade). But, it’s also easy to use as a base for other summer treats.

To pack a big mint punch, make a mint-infused simple syrup to sweeten the tart lemonade. Want a little sparkle with that? Add seltzer for a bubbly, even more refreshing touch. For a spike, try adding gin or vodka to make a perfect summertime cocktail that bears resemblance to the classic South Side. Or, for a refreshing snack for the whole family get a popsicle mold and fill it with the plain mint lemonade and enjoy a cooling treat.

In a glass combine the lemon juice and mint simple syrup. Stir to combine. Top with seltzer (for a small glass use about 1 ounce to top, or add more for an even lighter drink). Garnish with mint leaves and serve immediately.

Combine water and sugar in a small saucepan or pot and bring to a simmer over medium heat. Stir occasionally, until the sugar is fully dissolved. (Be careful not to leave the syrup unattended or the sugar may burn or it may become too thick.) Add the mint to the pot, stir, and remove from the heat. Allow to steep for about 15 minutes. Strain the mint out and allow the syrup to cool to room temperature. Transfer to a glass jar or bottle and store in the refrigerator.