Revitalized Rugelach with Raspberries and Chocolate 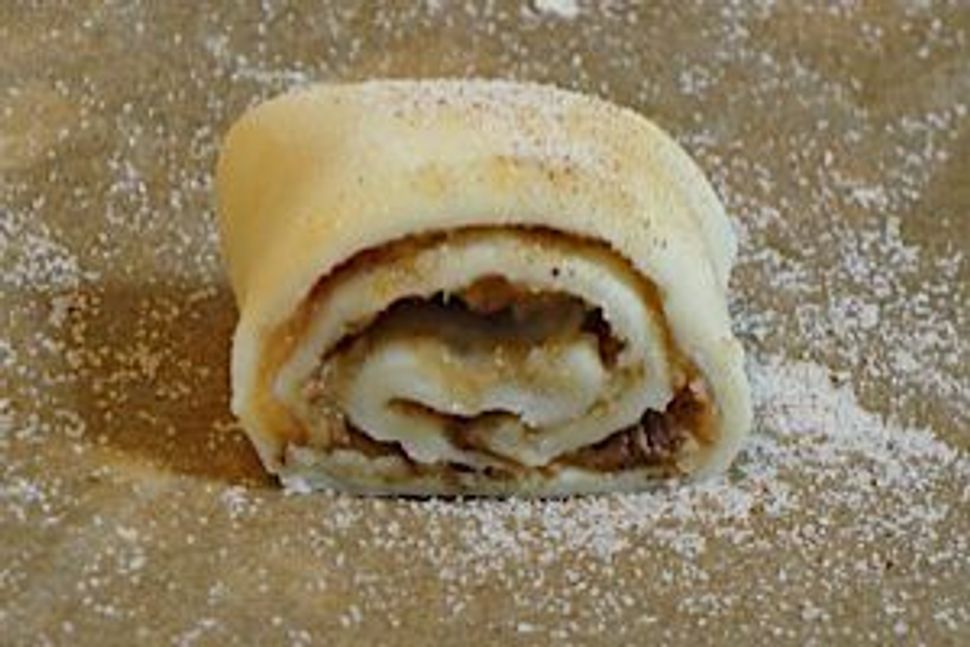 Growing up I was spoiled. My grandfather was a baker and he always had fresh out of the oven cookies for us. His rainbow cookies were my favorite.

After coming over from Germany, he began his career creating confections for the US Army during World War II, and moved on to own a bakery in the heart of Queens. My grandmother ran the books and decorated the windows, while my mother and her sister learned basic arithmetic working the register, and got into sisterly spats ending with throwing a pie across the room.

Now, years later, I’m attempting to recreate some of his delicious recipes with just his note cards to guide me — and a little help from my mom.

What might seem like a step by step process is actually a gigantic undertaking as it is no easy task to convert his notes into something you might find in a cookbook. His recipe cards are essentially just a list of ingredients on a piece of paper. Like any consumer based kitchen, his measurements are 17 times larger than what I can make in my mixer, contain loads of fat (even lard!) and often ingredients that are much harder to keep at home (like a starter). I decided to tackle one of the easier recipes and attempt to recreate his rugelach.

My grandfather’s Rugelach dough recipe is incredibly simple and calls for equal parts four, butter and cream cheese. What can be wrong with what? Then he gets vague. Mix by hand and bake at 400 degrees. Well, it was a start, but, it was up to me and mom to figure out what to do in between.

Instead of the usual raisins and nuts or chocolate filling, filling i mixed mini chocolate chips with fresh raspberries for a modern touch. Traditionally, homemade rugelach is made in the shape of a crescent by cutting the dough and forming moon shapes, but since I was mimicking my grandfather’s bakery recipe I decided to make the log version — it’s also much less time consuming. The whole process took me less than an hour and I had amazing treats to show for it. Try the revitalized recipe below for yourself. Delicious!

2) Mix the cream cheese, butter and flour by hand. Eliminate any lumps with your fingers, but do not cream in mixer.

4) Roll out one ball into a 12— by 8—inch slab using a floured rolling pin, and on a floured surface.

5) Sprinkle dough rectangle with a light covering of chocolate and crushed raspberries (Note: The dough has no sugar, so for sweeter cookies, add sugar or your favorite sweetener to raspberries)

8) Repeat the process with the remaining three balls of dough

Revitalized Rugelach with Raspberries and Chocolate