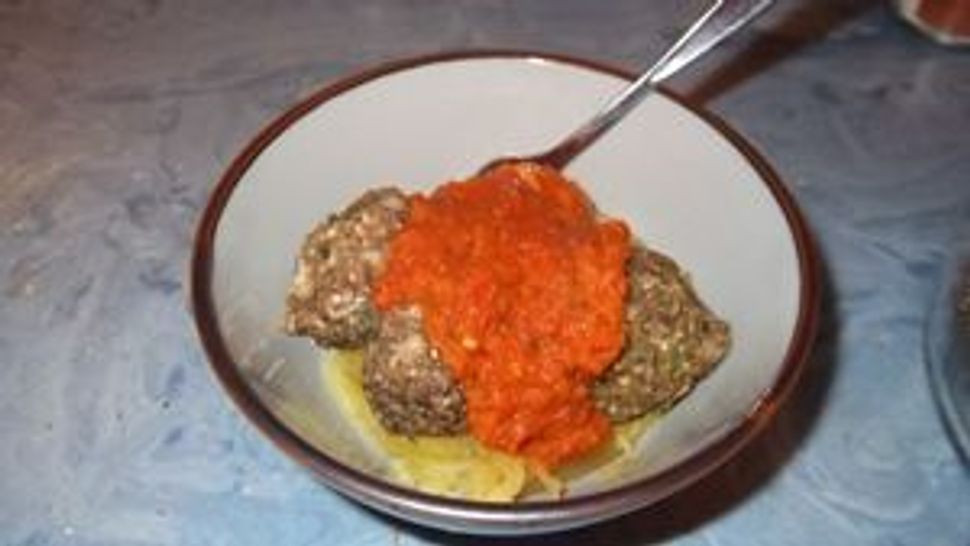 I have a few basic go-to eggplant recipes, but didn’t feel like eating baba ganouj for the next two weeks. My other go-to eggplant recipe, is so time consuming, I only make it a couple of times each year, and had made it within the last month; I was not interested in recreating it, despite the compliments it always receives. Given the abundant contents of my CSA basket, I was inspired to test out a new recipe, but wasn’t sure where to start; that sent me my well-worn cookbook collection and Taste Spotting, an online resource for recipes submitted by bloggers around the world (aka, total food porn).

While on Taste Spotting, I noticed several recipes for eggplant balls of various kinds, all of which contained cheese. I was initially looking to make this a dish I could bring to Rosh Hashanah dinners, which meant I would have to reformulate the recipe so that it was parve. Not one to be deterred. I substituted nutritional yeast for called-for parmesan cheese, a combination of matzah meal and wheat germ for the bread crumbs, extra parsley from my yard (a generous handful instead of a meager two teaspoons), and while not a change, the special thrill of eggs from a friend’s farm to bind it all together.

Rather than serve the eggplant balls solo, I went with a twist on a classic dish: I decided to serve the them baked in tomato sauce, over spaghetti squash!

The end result of this cooking extravaganza was a surprisingly meaty vegetarian dish. My omnivorous family members and friends couldn’t get enough. Served over spaghetti squash, this meal provides plenty of protein and several servings of vegetables without looking like pasta primavera (the all-time, most irritating thing to see as the sole vegetarian entrée on a menu).

Whether you are having company, or just want some comfort food, this meal is sure to hit the spot.

1) Preheat the oven to 400ºF Clean the eggplants, pierce them with a fork several times and bake them for 45 minutes, or until they are shriveled. Let them cool, cut off the tops and peel them. Place all of the eggplant “meat” ball ingredients into a food processor, and pulse until a paste has formed. Add more matzah meal if mixture is too viscous.

2) Slice the washed spaghetti squash in half across the middle and scoop out the seeds. Place the squash cut side down in a baking dish, and fill the dish with an inch of water. Place the baking dish into the oven for 30-45 minutes, until the skin is easily pierced and the squash easily pulls out of the skin like threads of spaghetti.

4 )Wet your hands with a little water and shape the eggplant mixture into balls. Place them on a non-stick oven tray (or pan lined with parchment paper) and bake them for 25-45 minutes until deep golden brown and slightly crusty.

5) In a second baking dish, pour the tomato sauce, top with the eggplant “meat” balls, and bake for 20-30 minutes, until the sauce is heated through and has lost some of its moisture.

6) Scoop spaghetti squash into a serving dish and enjoy with the saucy eggplant “meat” balls!

If you don’t have tomato sauce on hand, you can make an easy blender sauce:

1)Boil a large pot of water. Wash five pounds of tomatoes and cut an X into the bottom of each tomato. Place tomatoes in boiling water until the tomato skin begins to crack. Drain tomatoes and allow to cool enough to handle.

2) Peel the tomatoes and cut out the cores. Place tomatoes, and chopped onion, three cloves of garlic, a handful of fresh basil, a handful of parsley, a teaspoon of dried oregano, 3 tablespoons of olive oil, a little salt and pepper, and any other spices you’d like into a blender and blend until smooth. At this point, you can cook the sauce until it is thick or store it in the fridge or freezer for later use!

*Miriam Leibowitz is a vegetarian, avid gardener, long-time home cook and JOIN for Justice alumna. When she’s not teaching, Miriam is working to bring affordable, healthy food access to Nashville’s food desert neighborhoods,rebuilding relationships between the African-American and Jewish communities in Nashville, and working with others to make the world a better place. (Cue Kumbaya!) *