Sipping in Summer at the Whisky Jewbilee 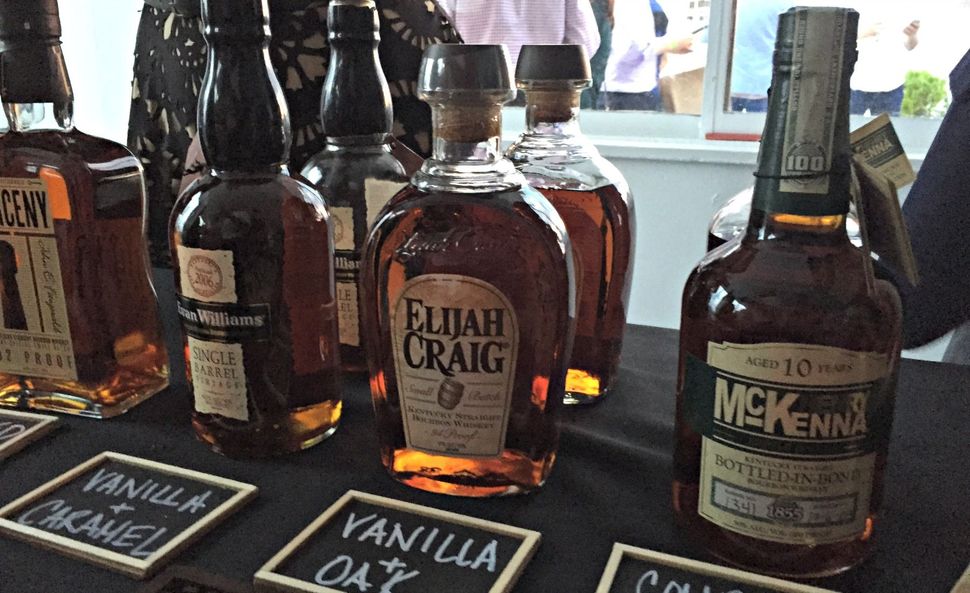 Evan Williams Single Barrel from Heaven Hill (second from left) had gravitas and a lovely breadth of palate.

This is a story of change. Of winter transforming into summer and of Scotch whisky giving way to American spirits.

I’m a believer in winter whisky. I trust in Scottish crofters harvesting barley while the weather lifts above freezing and then distilling whatever’s not consumed as solid before November into spirits. I have faith that barley will transcend its perishable form ready to stoke the inner fires throughout the winter.

Whisky, leather boots, log fires. That’s the way it is.

So when Whisky Jewbilee changed its timing from winter to summer last year I was skeptical. Avoiding the fall behemoth that is Whiskyfest made absolute sense. Dodging the Jewish festivals in the fall; also sensible. But would the organizers, Joshua Hatton, Jason Johnstone-Yellin and Seth Klaskin, be able to convince Manhattanites as well as the bridge and tunnel crowd to come eat cholent and drink whisky in June? 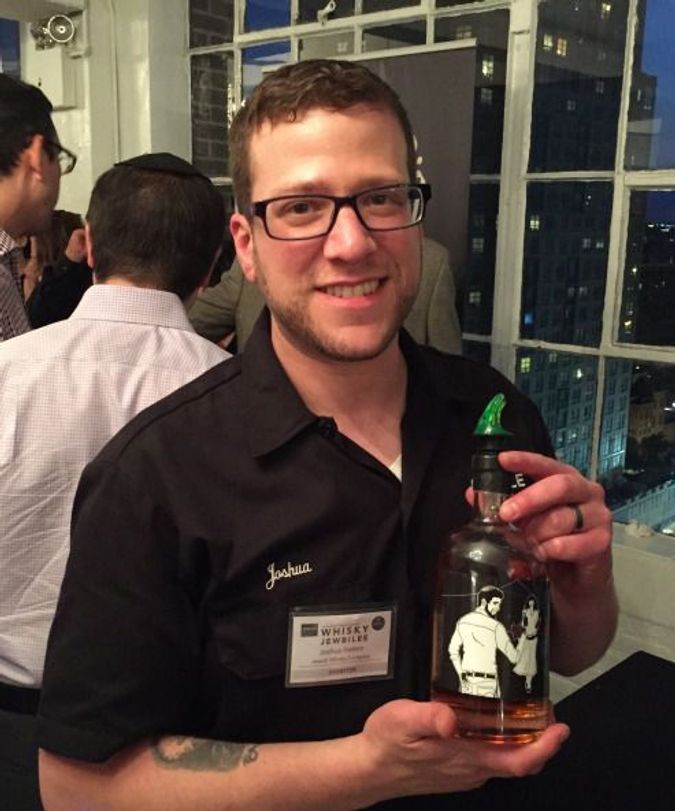 They said yes. And there were some beautiful photos of the event in the new location but I — out of the country in June 2014 — still remained unconvinced.

This year I arrived eight minutes after Whisky Jewbilee’s nominal start time to find a 50 yard line out of the door. And not just because the ticket scanners were slow.

People cruised the line trying (and failing) to score extra tickets. Hatton later told me that they had sold out of the more-than 400 tickets and there were 65 people on an official waiting list. The mood on the line was like an early season football game meets an Orthodox second wedding. Low key. Hopeful. Schmoozy. Mostly men. Beards. Kippahs, a few payes.

The new venue, though already outgrown, is a step up, both literally and figuratively, from 2012’s West Side Institutional Synagogue, or 2013’s Zanger Hall. The views from the penthouse floor, with 360-degree views over Manhattan from Midtown’s far west side were stunning. Less stunning from my point of view was the prevalence of cigar smoke on the wrap-around terrace, where awnings shaded some tasting tables and the cigar table.

Though surrounded by some wonderful Scotch, I was ready to sacrifice the opportunity to try exclusive golden nectars for the sake of the story. On with the new.

And what’s happening in whisky at the moment — and not just Jewish whisky — is American whisky. Or whiskey. (You’ll see both on bottles).

In 2012 Americans were mainly represented at Whisky Jewbilee by Four Roses and Angel’s Envy. By this year the home continent contingent (lets count the Canadian Forty Creek) had grown tenfold. 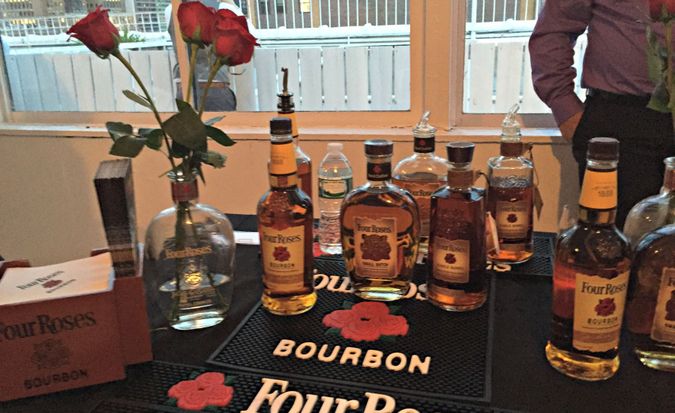 Four Roses was an early participant in the annual whisky fest, now in its 4th year.

Scotch is made from Scottish barley, yeast and water that’s fermented, distilled and stored in pre-used casks that impart flavor to it. American versions of the spirit have more leeway in terms of grain and cask, they also tap into a different type of myth: Whiskey and bourbon are rough, rugged frontier drinks quaffed by dusty cowboys, rather than the stories of Scotch as a magical Scottish drink perfected over centuries by a family on an island (or by a river) in the 19th century.

The reality, in both cases, is somewhat different — a story for another day. Reid Mitenbuler’s recent “Bourbon Empire: The Past and Future of America’s Whiskey” outlines the state of the industry on this continent and notes the strong involvement of Jews and the Jewish community in its history.

The growth of interest in whisky in general is partly because of the increased attention attracted by all plausibly artisanal consumables. This year, as an illustration, Grow and Behold (kosher pastured meats) had a table at the Jewbilee, with ‘bacon’ lamb. But American whiskies are increasing in popularity because they are improving their quality while Scottish ones are not getting any cheaper!

As a Scotch drinker, I was in search of something that would have the depth and development of flavor that I liked but in an American bottle.

Here are my five finds in the order I found them:

This was the first whisky that I tasted and I was blown away. It has a lovely dark flavor that has some development in it. Sweet malts give way to raisins. A perfect complement to a muffin or a croissant. Seattle that gave us the new American coffee has provided us with the first American coffeehouse whisky.

Heaven Hill has a wide variety of whiskies and bourbons and they brought a wide complement of six to the Jewbilee. Although the Heaven Hill exhibitors were excited about their new “Larceny” product, this single barrel vintage bourbon was by far my favorite. With some gravitas and a lovely breadth of palate — like a shiny walnut dashboard — it’s an award-winner for a reason.

A small new distillery in the top left corner of Michigan has produced a lovely clean whisky. Though the state is famous for its cherries, you should give their cherry whisky a miss. The no-nonsense no-cherry whisky from Traverse City has a straightforward sweet vanilla mouth that makes for perfect summer sipping.

Barrel Bourbon are blenders and they were pouring a whisky and a bourbon at the Jewbilee. To my surprise I much preferred the bourbon. I hadn’t read their description, “Dark toasted English Muffins served sizzling hot, smeared with both lemon marmalade and sweet French butter immediately comes into view” but, unlike some of the copy written to describe the spirits it’s apt, This batch is both tangy and toasty with a hint of smoke.

I started and ended, by chance, on a Westland. This was the last thing I drank and, fortunately, it’s an ideal dessert whisky. Single Cask Nation, who bottle this, comprises basically the Whisky Jewbilee folks. It feels like bad form to write about both the event and the whisky. It feels like doubly bad form to write about a whisky that’s not available if you weren’t at the event. And it feels like triply bad form to write about another Westland whisky. But, slightly kitsch bottle design aside (pictures of him and her, bottles, a suggestion of celebration — perhaps Jewish), this was a delicious caramel malt. It is perhaps a little too syrupy going down, but a touch of plum or cinnamon and then, the longer you leave it, the more chocolaty it gets.

An honorable mention too must go to the Defiant single malt out of Golden Valley, North Carolina. Stored for a scant three months in a metal tank, the whisky is nevertheless quite palatable. The distillery is committed to quality ingredients (delicious Blue Ridge rainwater and fine barley) and innovative ways of maturation: the two main hallmarks of developing American whiskies. Instead of the low surface area of flavorful wood presented by casks, the tanks are filled with stacked rounds of cut white oak carved to maximize surface area.

Over the next few years our palates and wallets will benefit from these American whisky innovations. And, as with a summer Jewbilee, that’s something to celebrate.

Dan Friedman is whisky correspondent and managing editor of the Forward.

Sipping in Summer at the Whisky Jewbilee