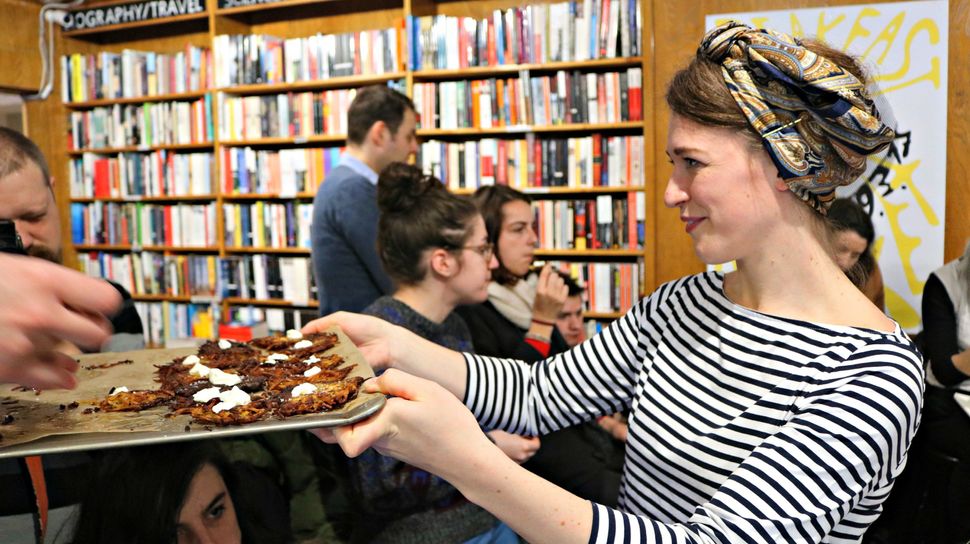 Smells of kreplach and challah wafted into the Rykestrasse Synagogue in Berlin on a rainy Friday in March, as Israel-born chef Itay Novick and his staff hurriedly worked in the nearby kitchen to prepare Sabbath dinner for nearly 100 guests. The dinner was part of the first-ever Jewish food festival in the city, Nosh Berlin, and it was sold out — as were the three other Shabbat dinners being prepared across the German capital.

Festival-goers were invited to attend pre-dinner services in the synagogue and many took up the offer, filing into Rykestrasse’s grand building. With its brilliant blue apse and intricate mosaics, the synagogue, which was built in 1903, is one of the most impressive in Berlin. In fact it is the largest synagogue in all of Germany, and it was one of the few that was not burned down during Kristallnacht 79 years ago. Although Torahs were burned and windows were smashed, the synagogue did not crumble. Rykestrasse was a fitting location for one of the keystone events of Nosh Berlin because the synagogue can be seen as a metaphor for Jewish culture in Berlin: It has remained standing in spite of attempts to destroy it. 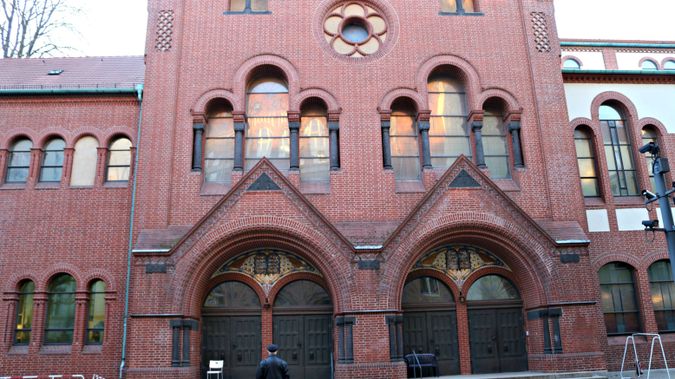 Paul Schatzberg in front of the Rykestrasse Synagogue before Kabbalat Shabbat services and Shabbat dinner. Image by Eric Schatzberg

Joining me at Shabbat dinner was my boyfriend’s father, Paul Schatzberg, a Holocaust Survivor who fled Vienna for Baltimore in 1939. He heartily ate the reimagined four-course Ashkenazi dinner while chatting in German about pig-blood-filled blutwurst with a new friend he’d made, fleischermeister Marcus Benser. (The blutwurst did not make an appearance at the dinner, which was kosher.) No doubt such unlikely meetings happened throughout Nosh Berlin, where Jews and non-Jews came together to experience modern Jewish cuisine. 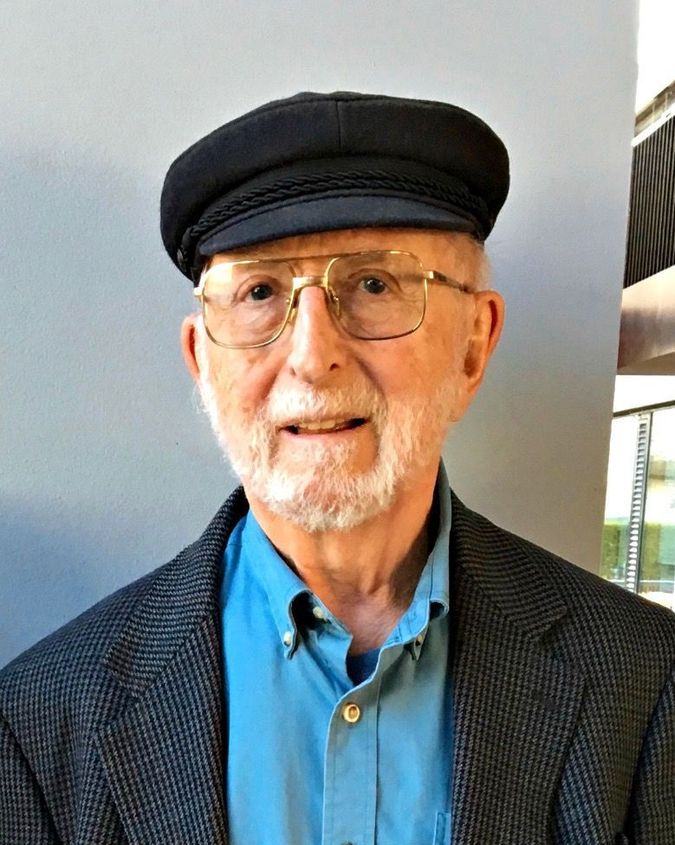 Paul Schatzberg at the Max Planck Institute for the History of Science. Image by Eric Schatzberg

“To be in Berlin in a synagogue today, three generations later,” said Schatzberg, is “a continued celebration of our survival. The Shabbat dinner was…good enough to permit social interaction among Jews from Berlin, from Israel and the U.S.A.” He called that interaction “the significant aspect of the dinner.”

Novick’s food offers contemporary tweaks to Ashkenazi favorites. Following a vegetable consommé with potato dumplings, the second course was a vegetarian “chopped liver” eggplant salad with horseradish cream. But tradition was honored in the main course: salmon with fermented dill sauce and sides of kugel and tzimmes.

“For years people didn’t think you could do Jewish food here,” said Novick, who came to Berlin last year to open his “culinary brand,” Elements of Food. According to historian Ronen Altman, it wasn’t until the mid 1980s, when Germans took more responsibility for the Holocaust, that Jews “felt a lot more comfortable” in Berlin.

With over 1,000 attendees over its nine days, Nosh Berlin was a resounding success. The festival sold out nearly all of its events. Clearly, Berliners were eager to explore their Jewish food culture, as were the group of North Americans on a Holocaust-education tour who were in attendance.

Nosh Berlin was the brainchild of an American and a Berliner. It was co-founded by Laurel Kratchovila, the proprietor of Fine Bagels, a shop housed in Berlin’s Shakespeare & Co. bookstore that turns out New York-style bagels, and Berlin-based food writer Liv Fleischhacker.

The festival was an ambitious event, featuring everything from a “Gefilte Ball,” complete with Klezmer band and pickle-juice martinis to an evening of rugelach and cinema.

Nosh Berlin is a reflection of the Jewish-food renaissance in Berlin, which has primarily been driven by Jews coming from outside of Germany, many of them Americans, Russians and Israelis. The Jewish population in Berlin has been growing faster than any other European city’s.

Currently Berlin is host to about 20 restaurants devoted to Israeli and Jewish cuisine, ranging from hummus joints to Italian-Israeli fusion places. Yet the Jewish-food scene in Berlin remains small compared to the Turkish one, with Doner kebobs dotting practically every street corner.

You can’t celebrate Jewish food in Berlin without grappling with the city’s history of Jewish persecution, which is literally etched into cobblestones throughout the city. Yet the history of the daily life of Jews has been given short shrift. 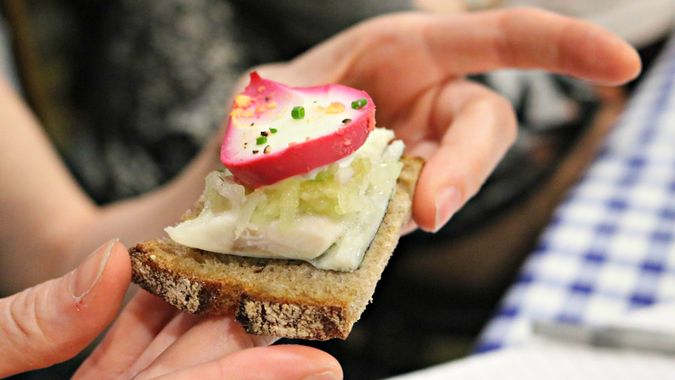 Herring with beet egg on rye at the Jewish Food of Poland event. Image by Eric Schatzberg

“The public school system was very good about teaching about the history of…the Holocaust…but the part that was missing were the more positive aspects of [Jewish] culture,” said Fleischhacker, who grew up in Berlin. “The fact that Jews weren’t just victims [is not taught].”

The goal of Nosh Berlin was “to give Jewish food culture its rightful place in the culture,” she said.

Kratchovila says that Jewish food today is about “merging traditions with amazing new innovative things.” This was in evidence at the festival. The Gefilte Ball began with the co-founder of New York’s Gefilteria, Jeffrey Yoskowitz, explaining that he was reinventing gefilte fish because he “no longer wanted to be embarrassed by his cultural and culinary heritage.” Yoskowitz’s reimagined gefilte-fish terrine with horseradish and dill on rye bread was sent around the crowd. He had somehow managed to make a dish characterized by oblong grey lumps into something beautiful and upscale.

But not all the food at Nosh Berlin was modernized. Tradition was celebrated at a history lecture and cooking demonstration sponsored by the JCC of Krakow. Surrounded by books in a Shakespeare and Co., attendees watched as Polish chef Kasia Leonardi filled dough with a poppy-seed-and-sugar mixture and pinched it into a triangular shape to make hamantaschen. Leonardi invited the festival-goers to participate, and they eagerly rolled up their sleeves. Like many Polish Jews, Leonardi only discovered her Jewish roots 12 years ago, when her sister was doing genealogy research. 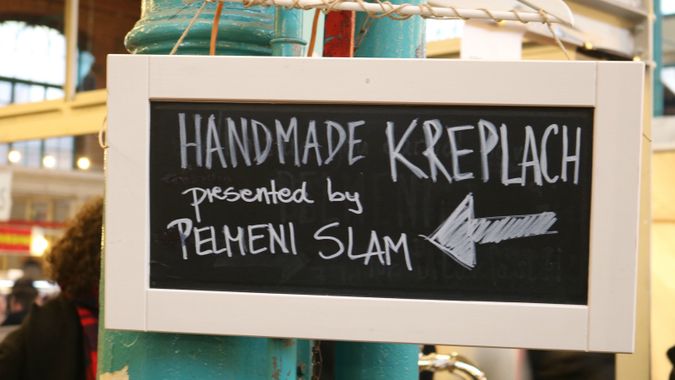 Leonardi was joined by co-presenter from the JCC, Anna Gulińska, who discussed the history of Polish-Jewish cuisine, emphasizing how similar Jewish foods like kishkes were to classic Polish foods. Gulińska herself is not Jewish, and she wasn’t the only non-Jew participating in Nosh Berlin. Although most of the presenters were Jewish, at the Sunday Breakfast Market at Markethalle Neun it seemed that nearly as many non-Jews as Jews were making food. The blinis were being prepared by a non-Jewish French crêpe maker who had learned to make them for the festival. Similarly, the kreplach were made by Hungarian-born pelmeni-maker Julia Dalmadi, who had also learned how to make kreplach especially for the event. Another booth featured a non-Jewish vegan café that was serving vegan blinis with “lox” made of carrots instead of salmon.

Of course Jewish food purveyors were at the market too. One standout was Gordon Café and Records, an Israeli café-cum-record-label and store. Gordon was started in 2014 by Nir Ivenizki and Doron Eisenberg, both of whom moved from Tel Aviv to Berlin in 2011. Ivenizki and Eisenberg are trying to bring Germans and Israelis together through music and food. Located in Berlin’s Turkish center of Neukölln, Gordon is known for its shakshuka, a popular Israeli dish that in this case incorporates a creamy mix of tahini and cheese with the traditional tomato sauce and eggs. “Some people ask us why we are in the Arab quarter,” said Ivenizki. “If you want to live in peace, you have to live together.” 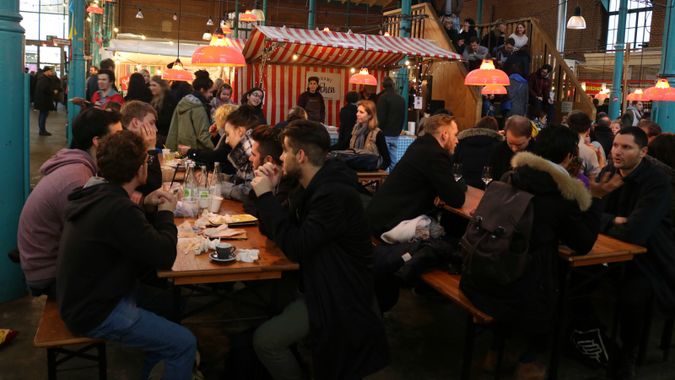 Perhaps that was the larger message running through the festival: that the new Jewish food movement in Berlin is about uniting Jews with non-Jews through food and sharing Jewish traditions. As Israel-born Yuval Belhans of Jewish supper club Kiddush told me, 80% of the participants at his supper clubs aren’t Jewish. Kiddush hosted two Shabbat dinners at the festival.) And that’s kind of the point. Belhans said that he wants not only to share Jewish food and traditions with everyone, but also bring people together.

“Nosh Berlin was a celebration of survival and love,” my boyfriend’s father, Paul Schatzberg, concluded. Given that the city showcases the cuisines of so many places, he added, “It is especially important to celebrate Jewish food and culture in the capital.”

Because Jews have always been pushed out of one country and into another, they are always adapting their foods to different countries’ cuisines. So just what is the new Jewish food? I’m not sure. It is both traditional and modern, Ashkenazi and Sephardi. Like Jews themselves, Jewish food is nearly always in flux.

But I am sure of one thing: The new Jewish food is not just for Jews. And that is a good a thing.

Hallie Lieberman is a historian and writer whose upcoming book, “Buzz: A Stimulating History of the Sex Toy,” will be published by Pegasus Books in November. Follow her on Twitter.