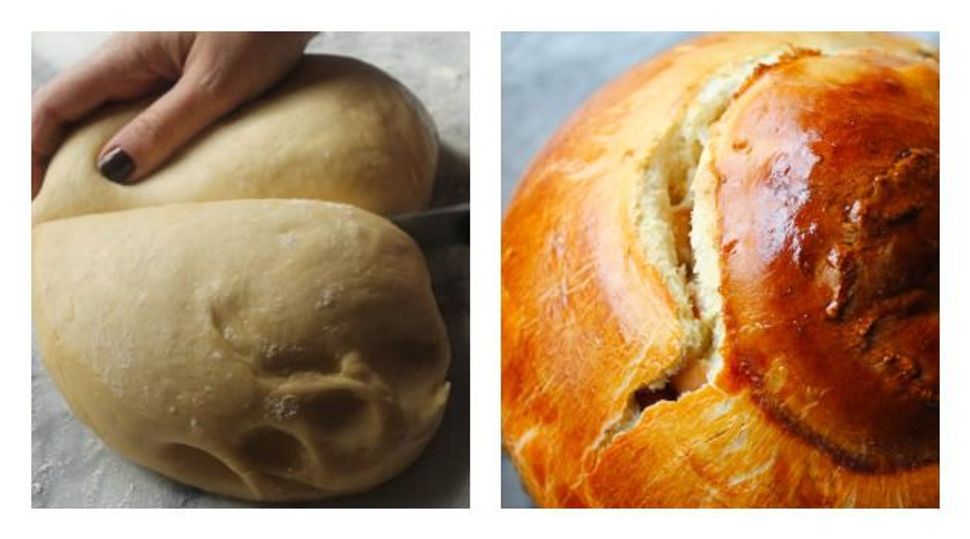 It started with an artichoke. I was in Rome studying food and culture. The day before, I had eaten the best pasta of my life: a simple cacio e pepe sublimely balanced with pepper, cheese, and the most perfectly cooked al dente noodles. But it was a artichoke in the old Jewish ghetto that left me speechless.

That bite became the inspiration for Honey & Schmaltz an ongoing culinary memoir of Jewish food.

Despite being raised by a Reform rabbi, religion and I have never really clicked. But as I bit into that fried artichoke — a food as Jewish as matzo ball soup — I was overcome with nostalgia. I’m not Italian, but somehow I felt a deep connection to my ancestors. I wanted to dig deeper into my own history by way of the lexicon of recipes my people had produced.

Over the last two months I met with and interviewed close to 40 individuals — chefs like Aaron Israel at Shalom Japan, food writers like Joan Nathan and Gil Marks and passionate home cooks. I asked them each to share a recipe with me — one that had been passed down through generations in their family and embodies their heritage. I asked them to cook the recipe while I witnessed, photographing their process in the kitchen, taking down the recipe and sampling the results. As they cooked I heard the stories behind the recipes, where they came from and who made them, when they were eaten and why they are special.

There was Dahlia Abraham Klein, the vegetarian cookbook author in Great Neck, NY who was born to Afghan Bukharian parents. She took me to a Persian grocery and cracked cardamom pods with her teeth. I sat on the train heading back to Manhattan, sucking on lemony pistachios and wondering: When would I have ever been so welcomed into a stranger’s home? That night I went home and made Ghormez Sabzi, a Persian green stew overflowing with herbs made bitter by the addition of dried limes.

I met Gil Marks, the well-known author and historian who gave me a lesson in the history of noodles while he fried matzo meal fritters in sweet honey and oil — his grandmother’s recipe.

I went to Washington, DC to the home of Joan Nathan. She greeted me with homemade apricot jam and made her mother’s plum tart, the one they would eat on Rosh Hashanah when Italian blue plums are in season.

These cooks welcomed me into their homes, their kitchens, their restaurants, as they cooked the food of their grandmothers and grandfathers, aunts and uncles. They told me the stories of their childhoods and their ancestors. The great names and the less renowned — all were generous with their stories and recipes.

I learned the chronicle of a people as their memories simmered and stewed on their stovetops and counters. When HoneyandSchmaltz aunches next week on May 1 — with these family recipes and the stories that lived beneath the ingredients — I hope it will serve as a collective testimony, that it enshrines our ancestors and provides an archive for their recipes. In the end, it is a menu for memory.