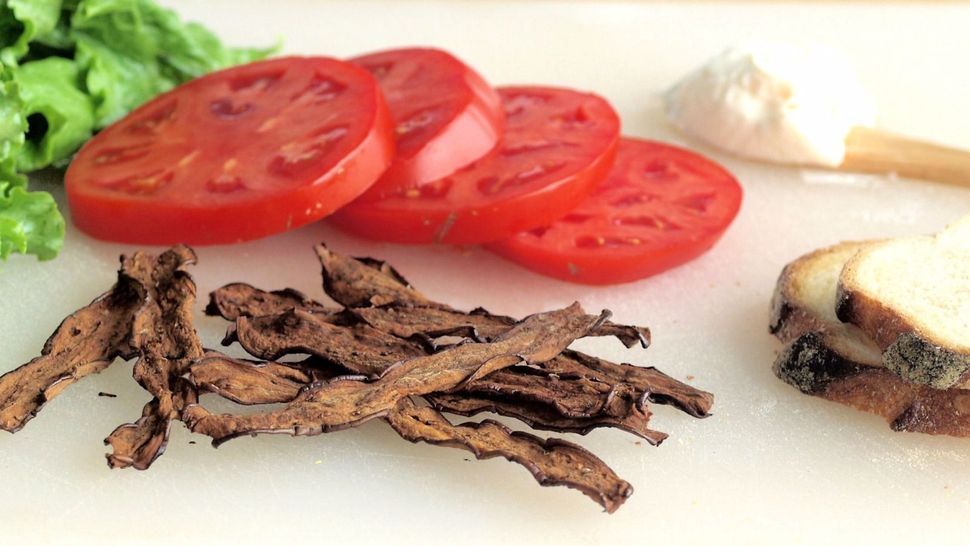 All the fixings for an ELT (eggplant, lettuce and tomato sandwich). Image by Gayle L. Squires

“I’ll give you 22 ways to love eggplant,” cookbook author exclaimed when the publisher of Short Stack Editions admitted it was his least favorite vegetable. And so, Pelzel developed, tested and perfected nearly two-dozen eggplant recipes for her most recent cookbook titled, simply, “Eggplant.”

This hand-sewn booklet packs snacking, family dining and entertaining ideas into fewer than 50 pages, stitched together with Pelzel’s anecdotes, personality and eye for detail.

I caught up with the author last week, and her infectious laugh punctuated our conversation about her journey to the food world and her love of the oft-maligned eggplant.

After completing a degree in journalism and working in advertising and publishing, Pelzel earned her cooking chops at Johnson & Wales and in Boston restaurants, including the venerable No. 9 Park. Longing for normal hours and a return to writing, she landed a job at Cook’s Illustrated, a publication known for its scientific and exacting process of recipe development, where she formed the foundation for her food writing career.

But Pelzel’s love for food and cooking began in less formal settings: Friday night dinners in a variety of restaurants with her Romanian-born, Israeli kibbutz-raised father; making matzo balls soup with her Norwegian great-grandmother; and gathering around the tables of her high school friends’ families.

“Why eggplant?” I asked.

“Eggplant is infinitely versatile,” Pelzel explained. “It can be used in Indian dishes or can take Chinese or Japanese preparations. It can be pickled, sautéed, pureed and used as a meat substitute for meatballs and veggie burgers.” In her book, she refers to eggplant as “the tofu of the produce aisle,” because it can take on so many different flavors.

This flexibility made the ingredient a natural choice for Pelzel. After spending over a decade collaborating on nearly 20 cookbooks (including working with Uri Scheft of Breads Bakery), she jokes that her own cooking style is “ish” — “It’s a little Middle Eastern-ish, a little Yiddish, Italian-ish, Brooklyin-ish and American-ish. It’s a hodgepodge, a little of this; a little of that.“

Eggplant is also personal for Pelzel: She told me that it reminds her of home. Her father made a smoky Romanian eggplant dip, and at family gatherings in Israel the table was always set with baba ghanouj and her aunt’s spicy tomato eggplant salad. Not surprisingly, all these recipes make appearances in the book, alongside vegetables that are miso-glazed, simmered in a spinach-cream sauce, steamed with chili and sesame and fried, then stuffed into pita with hard-boiled egg or dipped in sriracha and blue cheese.

But before I could get to any of these preparations, I found what I believe is the ultimate Jewish recipe: the E(ggplant)BLT. Among those of us who have kept kosher at any point in our lives, who hasn’t longed for crispy, umami-laden strips sandwiched simply with a lettuce leaf, a ripe tomato slice and an obscene slather of mayonnaise?

With Pelzel by your side, you can slice, salt, marinate and dehydrate your way to a vegetarian version of what many call the gateway drug to treyf. Yes, the results lack the decadent fattiness of the real thing, but the flavor and texture are there. And once you get the technique down (it really requires little more than time and a mandoline or steady knife skills), the variations for these eggplant chips are endless.

The format of this book — its small size and singular focus, its whimsical drawings, its sheer cuteness — lends itself to fully exploring a divisive vegetable. “This is fun!” it shouts. Like all – a series of collectible and functional small-format, single-subject cookbooks that entered the scene in 2013 (I’ve gifted the “Honey” volume to friends on their one-year “paper” wedding anniversary) — “Eggplant” is an ode to Pelzel’s favorite ingredient, told through stories and recipes aimed at the home cook.

Her love for eggplant was palpable when I asked her to pick a favorite variety. While she initially went for the most practical option — small Italian ones with fewer seeds and therefore less bitterness — I could tell she didn’t want to decide. She compared fairytale eggplants to little puppies: “They’re just so cute and small and adorable.” She raved about the beauty of Turkish orange orbs that resemble mini pumpkins and the tenderness of the skin of finger-like pale purple Chinese ones, which are great for sautéeing.

Also, when we discussed eggplant seasonality and shopping, Pelzel described the joy of going to the green market in late summer and early autumn when nightshades — the family that includes eggplants, tomatoes and peppers — are in season: “You go to the market and eggplant is just so beautiful — some of them are so tiny and taut and sexy and curvy and you end up buying a couple or 10.” And even the varieties that are available year round in grocery stores have appeal: “You don’t want to buy anything that looks bruised or has soft spots, you want it to be tight and shiny and inviting.”

Given the time of year, I asked Pelzel what she recommended for a holiday table. Since she was a vegetarian for several years, she suggested a few options to complement traditionally heavy or meat-laden dishes. She said she finds that her father’s eggplant dip — easy to prepare and lighter than tanini-based baba — is a good counterpoint to chopped liver as a first course. And for those looking for an impressive centerpiece that can hold its own against rack of lamb or brisket, she points to a savory upside-down tarte Tatin using store-bought puff pastry and a rainbow of seasonal vegetables.

On the acknowledgment page, Pelzel could offer thanks to a whole host of people as is traditional, but instead she thanks her reader with humility (and, in a postscript, her sons with humor). She expresses gratitude to those who entrust her with their grocery dollars and kitchen mess and cleanup. She wants to help take care of your people. If there’s anyone who can give eggplant the love and attention it deserves and can give you the tools to do so too, it’s Pelzel.

Eggplant Bacon for an EBLT

The key to making thin strips of eggplant crisp like bacon is time. First, salt the eggplant and let it sit for at least an hour so it lets go of all of the excess water. Then marinate it with high-octane stuff like maple syrup and liquid smoke (just a little won’t kill you, I swear) overnight. Then slowly bake it in a barely warm oven. The result is kind of like smoky-sweet eggplant chips, and yes, they can totally stand in for bacon in a BLT or even for chips with baba ghanouj.

1) Cut the ends off of the eggplants, then slice a sliver off of one side lengthwise so the eggplant doesn’t roll around when you slice it. Cut each eggplant into think planks, about 1/8- to ¼-inch thick (use a mandoline if you have one), so you have at least 20 slices (some will break). Place the eggplant in a colander and toss with 1 tablespoon of the salt, then set the colander in the sink and let it drain for about 1 hour. Pat the eggplant slices dry with paper towel.

2) In a large bowl, mix together the apple cider, maple syrup, soy sauce, liquid smoke (if using), rosemary, smoked paprika, cayenne and the remaining ½ teaspoon of salt. Add the eggplant and toss to combine, then transfer to an airtight container and refrigerate overnight, shaking the container (make sure that lid is on tight!) every now and then.

3) Preheat the oven to 225° F. Lightly coat a wire rack with nonstick cooking spray (or brush with a little oil) and set inside a rimmed baking sheet. Lay the eggplant slices on the rack and bake until they’re dry, crisp and golden brown, about 1½ hours.

Note: The eggplant bacon loses its crispness quickly, so eat it up tout suite.

Recipe from “Eggplant,” by Raquel Pelzel, used with permission from Short Stack Editions.