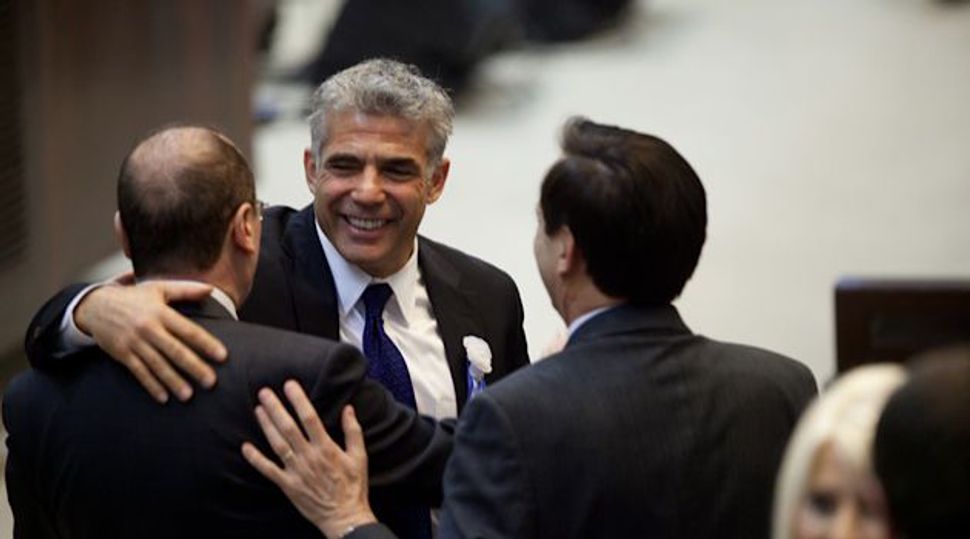 Devil in the Details: Discontent over the Haredi exemption from military service contributed to Yair Lapid?s strong showing in the Israeli election. Still, any major changes could be years away. Image by Getty Images

During Israel’s election campaign last January, the new Yesh Atid party’s single most popular stand was its vow to end the exemption that Haredim, or ultra-Orthodox Jews, receive from mandatory military service, which is obligatory for other Israeli Jews. Now, to the surprise of many cynics, that promise is about to be fulfilled.

In politics, however, even kept promises are often kept imperfectly. And that has some of the move’s original supporters fretting.

According to the March 15 coalition agreement signed by the four parties that will govern Israel, within just 45 days of taking office, Israel’s new government will present legislation to draft ultra-Orthodox men into the army.

But Idan Miller, chair of Common Ground, a lobby group for universal service, remains concerned by the fact that the coalition agreement envisions a four-year gap before Haredi conscription officially begins. “Four years from now there is a good likelihood there will be another government that will cancel the whole thing,” he said. Similarly, Micky Gitzin, executive director of the pressure group Be Free Israel, said that a “big question” hangs over whether the law that is passed will really be enacted.

Miller hastened to acknowledge that the agreement on conscription is “definitely a big step.” It was the issue, in fact, that is widely credited with having propelled Yesh Atid to its surprise second-place finish in the election, winning 19 of the Knesset’s 120 seats. “If 19 seats in Knesset [cannot] start the process, we’re doomed,” a hopeful but wary Miller said.

It is a kind of tug of war between bright expectation and battle-weary cynicism that characterizes many of the move’s supporters as the new government launches itself.

And the time lag in implementation of the anticipated law is not the only cause. During its campaign, Yesh Atid demanded a draft for all Haredi men when they reach the age of 18 — the age at which most others are conscripted — with the exception of 400 outstanding yeshiva students each year. But in the government coalition’s new plan, the Haredim don’t need to serve until the age of 21, and the number of exemptions is more than quadrupled, to 1,800.

Nevertheless, Ofer Shelah, the Yesh Atid lawmaker behind the draft plan that the government will promote, told the Forward: “This is huge. It’s revolutionary.”

Shelah said that during its campaign, Yesh Atid put forward the number 400 as a statement of “ethos” — a symbolic figure because this is the number of Haredim that Israel’s first prime minister, David Ben-Gurion, exempted in 1948, when the Jewish state was founded. The exemption of 1,800 talented yeshiva students each year would mean that about 80% of Haredi men who come of age each year will serve, and that would be a success, he said.

Increasing the age of conscription for Haredim to 21 also carries a large cost, and this is in hard cash for Israeli taxpayers. By 21, many Haredi men have married, and married soldiers receive higher stipends than those who are single. Shelah said that legislation will overcome this problem by halving the stipends received by all married soldiers.

Despite these two compromises, Yesh Atid insisted on two other clauses in the promised legislation to ensure that its political victory was not marred by accusations that the party had backed down on principle.

The draft law will institute reductions in the usual three-year length of army service for other soldiers, based on the assumption that a larger pool of people will be sharing the burden.

And it will try to tackle one of the most complex problems stemming from the Haredi exemption. Currently, the condition for receiving an exemption is that Haredi men are enrolled in yeshiva. If enrolled, they are legally barred from working. The Yesh Atid plan says that this rule should be canceled during the four-year implementation period, opening employment opportunities to any Haredim who don’t want to study but wish to avoid the draft.

The new law addresses this concern, too, with funds to raise the education level of Haredim who are being exempted, in order to make them employable. Shelah said that hundreds of millions of shekels will be invested toward this goal.

“We’re talking about tens of thousands of people who are incapable of obtaining gainful employment right now, so we have a national project of giving them the opportunity to get work,” he said. Shelah admitted that the cost will be high, but he said that “the alternative is to keep just spending on people who don’t work.”

While supporters of Haredi conscription may be cautious about the promised law’s prospects to deliver reform, Haredi political leaders are unambiguous, and apoplectic. During the government’s March 18 inauguration, Moshe Gafni, of the Haredi United Torah Judaism faction, shredded a copy of the coalition agreement on the Knesset floor, calling it a “white paper against the Haredi community.”

The term “white paper” crackles with emotion in Israel, as it evokes memory of the 1939 British document of that name setting strict limits on Jewish immigration to Palestine despite the need of Jews for a refuge from the Holocaust. Haredim were offended by their exclusion from the government coalition — the first such exclusion in almost two decades — and to the prominence given to the draft in the coalition agreement.

The provision’s survival in the governing coalition agreement reflected Yesh Atid’s decision to stand firm on its position through a long series of complex negotiations. The party was helped by a pact with the Orthodox-Zionist party Jewish Home, under which the two factions agreed to enter the coalition only as a pair, with a draft guarantee, and without Haredi parties.