Battling Over Women’s Bodies in Modi’in 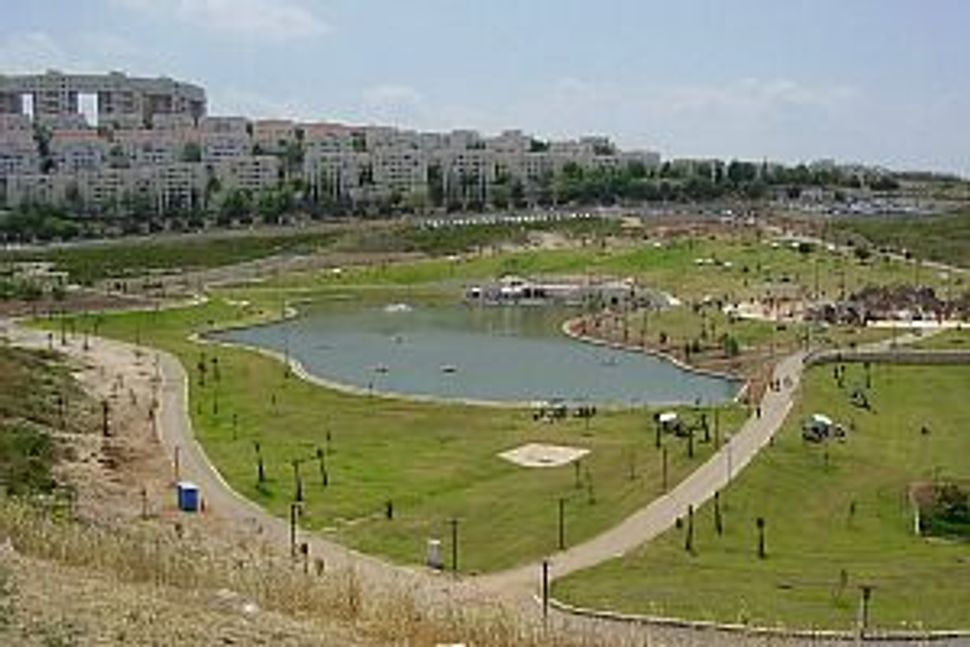 This Sukkot, there is a religious battle going on in the city of Modi’in, Israel, and as often happens in such battles, it is being fought over women’s bodies.

It actually started this past Passover, when the open, mixed city of Modi’in was inundated with visitors from the neighboring ultra-Orthodox town of Modi’in Illit, also known as Kiryat Sefer. The primary attraction for the visitors was Park Anabe, a beautiful expanse that sits 200 meters from my house. While it’s taken 10 years to complete, the park is now filled with playgrounds, grassy knolls, treks, a bike-path, an amphitheater and most importantly, a 14,000 square liter lake with fountains, fish and a variety of boating. Park Anabe is a central part of Modi’in life — members of my family visit regularly — and contributes significantly to the sense of quiet tranquility that characterizes Modi’in.

Since the lake opened in 2010, that tranquility has been interrupted each Passover and Sukkot when thousands of haredi visitors flock to Modi’in to use the park, which offers wholesome entertainment, can accommodate large groups of people, and is mostly free (only the boating and ice creams cost money). But the masses of haredi visitors, who bring with them a culture that is anything but sanguine, often make it difficult for Modi’in residents who are not haredi to find a patch of grass to sit on.

For the most part, Modi’in residents have expressed a mixture of annoyance and understanding about the situation. They’re irritated at what feels like a major cultural disruption but happy that they are living in an open city in a democratic country. That the park is free and that it is such a great attraction is nice. Lucky us. But the holidays end up feeling like a massive invasion. For those weeks when we cannot use our own park, is this just a small price to pay for quality of life?

Such were the general sentiments until last Passover, when haredi visitors started to make demands of the women on Modi’in. Suddenly, things began to change. First, a woman who was performing in the park was asked to leave the stage by haredi audience members — a request to which she unfortunately acquiesced, setting a bad precedent. Then, a well-known local reporter went to the park dressed in her usual clothing (jeans and a tank-top), and was made to feel uncomfortable by other park-users. She then wrote about the experience in the local newspaper. Calls to charge entry or close the park to non-residents were posted on blogs and Facebook, but Modi’in mayor Haim Bibas did not heed the calls. At least, not at first.

This anxious détente came to a head a few weeks ago, when the mayor of Modi’in Illit, Yaakov Gutterman, announced that from now on the archaeological sites in Modi’in Illit would be closed to non-haredi visitors. Why? He said that it was because of the way non-haredi women dressed. In other words, Gutterman did not want his city to be dangerously infected with the sight of, say, women’s ankles or shoulders.

Bibas did not hesitate to respond — both in the local media and on his Facebook page — that if Gutterman is planning to close his city to non-haredim, Modi’in will promptly respond by closing its doors to haredi visitors. Gutterman refused to back down — it’s women’s bodies we’re talking about! — and neither did Bibas. It’s now official: Non-Modi’in residents will not be allowed to enter Park Anabe over Sukkot this year.

Interestingly, Bibas has not received as much support in this decision as one might have expected. Several of his own council-members have come out strongly opposed, arguing that Modi’in should remain open, no matter what. Levana Shifman, the councilwoman who holds the portfolio on the status of women, wrote in an official response, “I believe that we have to welcome visitors with open arms — that is, as long as they keep the peace and do not interfere with our way of life.” She added that she is in favor of discounts on services such as parking for residents, but does not like the efforts to keep people out.

What’s particularly interesting is how much women’s bodies are at the center of this struggle. The inability of certain haredim to maintain pleasant relationships with secular neighbors is, astoundingly, so often about the need to control women’s bodies — how we should dress, how we should (or should not) speak, how many children we should have, how we should walk through the world. The haredi obsession with the female body colors every conversation about the place of haredim in Israeli society, and has been at the core of this entire episode.

(I would add, by the way, that it’s not just the haredim that have a woman problem. To wit, in Modi’in News’ latest story on the battle between Modi’in and Modi’in Illit, nine “expert” opinions were solicited for comment, each with a photo and a byline. You guessed it — eight men and one woman. Let’s not pretend that the Modi’in leadership is so amazingly sensitive to gender issues.)

I think that the real war going on in Israel is not so much between haredim and non-haredim but between some haredim and other haredim. There are a lot of haredim who want to live a normal life — work, have some money for leisure, get along with the rest of Israel, and avoid telling women what to do. But their lives are constantly dictated by the haredim who don’t respect women, who think that the rest of Israel should bow to their needs, who believe that they will miraculously have all the money that they need even if they don’t work while refusing to acknowledge that secular Israelis are footing their bill, and who continue to make life uncomfortable for everyone else.

Haredim who are unhappy with radical thinking need to start speaking up. And Modi’in would do well to figure out how to support these more moderate citizens. Otherwise, the Modi’in story might just be the first battle in a long protracted war right here in my own neighborhood.

Battling Over Women’s Bodies in Modi’in