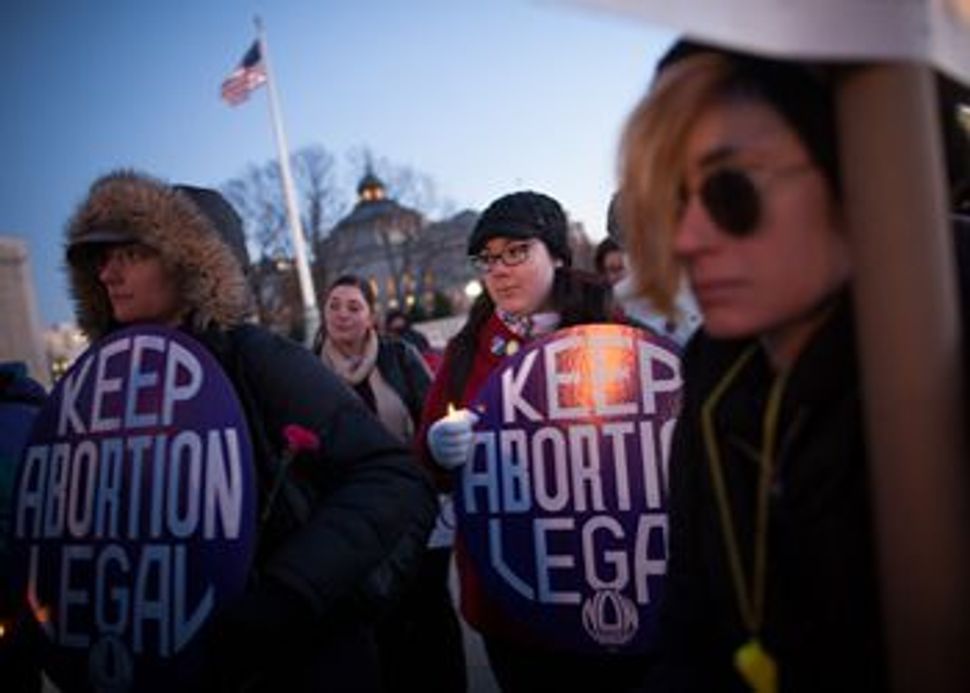 Activists commemorate the 40th anniversary of Roe v. Wade at a vigil in front of the U.S. Supreme Court on January 22, 2013. Image by Allison Shelley/Getty Images

For several years, as we’ve documented here at the Sisterhood, the anti-choice movement in the U.S. has been trying a “throw everything at the wall and see what sticks” technique. This flurry of uterus-focused activity got its own nickname: “The War on Women.” In reality, these unnecessary and intrusive health rollbacks hurt more than just one gender, and the “war” part didn’t stop when the catchphrase fell out of fashion. Some measures passed, others were modified, and now the assault on rights has ratcheted up again.

Legal abortion in several “battleground” states hangs by a thread. Again, some of these laws will be halted by the courts, but others will squeak by, leaving reproductive health access out in the cold, and women seeking care in a pre-Roe environment. And even if the most extreme laws are struck down, the goal of many who support these bills is to see the battle continue and Roe overturned by the Supreme Court, as Sarah Kliff reports:

The second motivation though, is a bit of longer-term strategy: The desire to bring an abortion case to the Supreme Court. North Dakota Gov. Jack Dalrymple pointed specifically to this when he signed off on the state’s six-week ban.

Here’s a rundown of the most egregious anti-choice bills:

● In Kansas, an “omnibus” abortion bill called “sweeping” by the AP passed the Senate and is expected to be signed into law by Gov. Brownback. Among many provisions, the bill states that life begins “at fertilization” — the moment sperm meets egg.

● In North Dakota, the governor has signed laws that ban abortion after six weeks, before most women know they are pregnant. Writing in The Nation, Jessica Valenti analogizes these kinds of extreme bans to torture, noting “the United Nation’s special rapporteur on torture has included lack of access to abortion in his yearly report on torture and other cruel, inhuman or degrading treatment or punishment…it stands to reason that the state is torturing its female citizens.” What’s worse, however, is that other laws may end abortion if this ban falls down in court: the state has also passed a “Targeted Regulation of Abortion Providers” law which puts burdensome restrictions on clinics that are designed to shut them down.

● Alabama and Mississippi have also passed TRAP laws that threaten the single or few clinics left in each state, while Arkansas has passed an extreme twelve-week ban. In all these states, now, legal access to abortion is on razor’s edge.

Rachel Maddow discussed these new restrictions on her show this week:

Maddow clearly points out how dangerous the situation is becoming for those seeking reproductive healthcare in these states.

Still, these past days haven’t been without victories. Today, for instance, a judge smacked down the FDA ruling that kept emergency contraceptives from being sold on pharmacy shelves, hopefully allowing the “morning after pill” to be sold to all ages. This is a major victory because not only does it give younger women the ability to get the pill fast, it enables all women to undergo less scrutiny when they’re ordering the drug.

And finally, if there’s one silver lining in the cloud of red-state reproductive restrictions, it’s the brave staff of the South Wind Women’s Center clinic that just opened in Wichita, Kansas, filling a void left after the assassination of Dr. George Tiller. These service providers face the targeted wrath of a dangerous movement that killed their predecessor; and yet they’re refusing to back down. The next few months will be precarious for this clinic, and as the new restrictions get their day in court, for many others around the country.