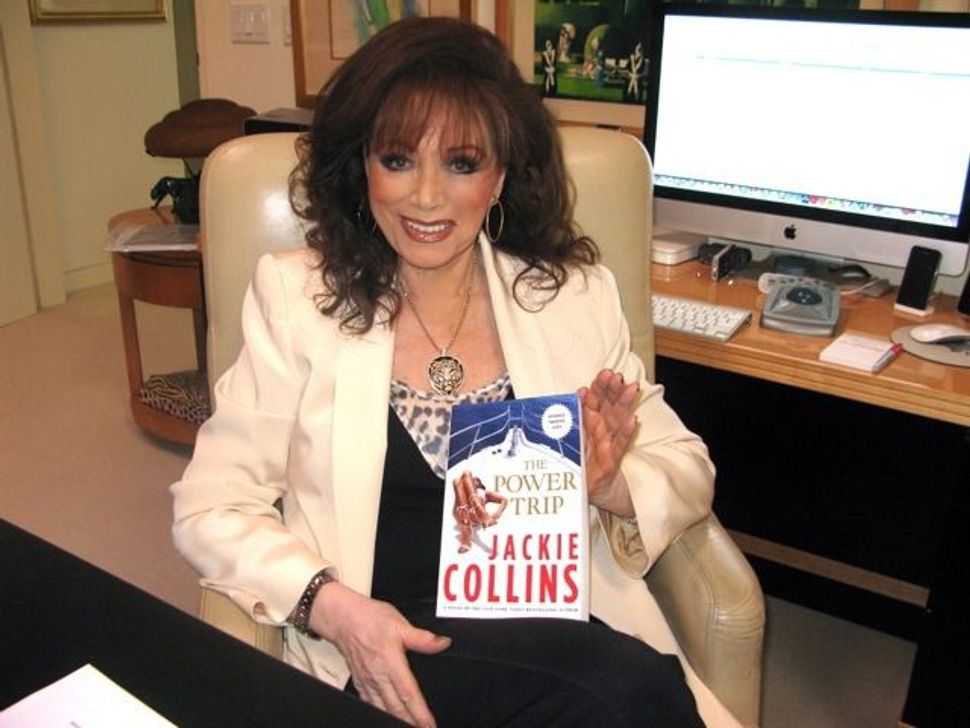 Jackie Collins passed away on Saturday, September 19th after a six year battle with breast cancer. Survived by her three grown daughters and her sister, the actress Joan Collins, Collins was best known for her novels about Hollywood debauchery. Some of her books were so steamy, they were banned not just by a single library, or from certain stores, but by entire countries including Australia and South Africa. Not that banning really harmed her sales. Collins earned millions from her books (“Hollywood Wives,” “Lucky,” “The Santangelos,” “The Stud” among many others) and frequently topped bestseller lists. She sold over 500 million copies in her lifetime, more than four times that which “Fifty Shades of Grey” by E.L. James has sold.

But what Collins did best is perhaps the best part of her legacy, and it isn’t selling 500 million copies in her lifetime (a feat for sure). She wanted written on her gravestone, ‘She gave a great many people a great deal of pleasure.’ The double-meaning there isn’t so hidden, not when you’re familiar with her sex-positive books that didn’t shy away from female empowerment, inside and outside of the bedroom.

In an era where women’s sexuality was blossoming on the screen, but still tightly controlled and manufactured for a male gaze, Collins subverted every trope and wrote women who were unashamed to have desire, sex, or critique the male characters in their stories for failing to perform to standards. She was proud of the women she wrote, and even more so that her female readership found refuge and inspiration in her characters.

It isn’t surprising that Collins wrote sexy books about people in the glamourous Hollywood life, as it wasn’t far from her own life. Born to a Jewish father and an English Anglican father and raised in England, Collins frequently got into trouble as a child. She snuck out of the house, went to parties, got kicked out of school for smoking, and was threatened with reform school constantly. Her sister’s invitation to Hollywood was Collins’ ticket into the glitz and glamor and surreal social life of the rich, famous, and absurd.

Or, in today’s language, Collins wrote the groundwork for what would become the obsession with the Real Housewives. She knew that the public’s need for celebrity gossip went beyond the set, and right into their private lives, and that’s where her books went.

In her final interview, she told People that she knew about the lump in her breast two years before she went to see a doctor. She urged people to get checked off and know sooner, but had no regrets about keeping her illness private. In the six years after her diagnosis, she wrote five books, worked on her memoir, traveled for pleasure and for book tours. She was prolific, determined, and wrote the books she wanted to write despite pushback and in the face of criticism from other romance writers.

Katherine Locke lives and writes romance and young adult fiction in a small town outside of Philadelphia. She can be found online at KatherineLockeBooks.com and @bibliogato on Twitter