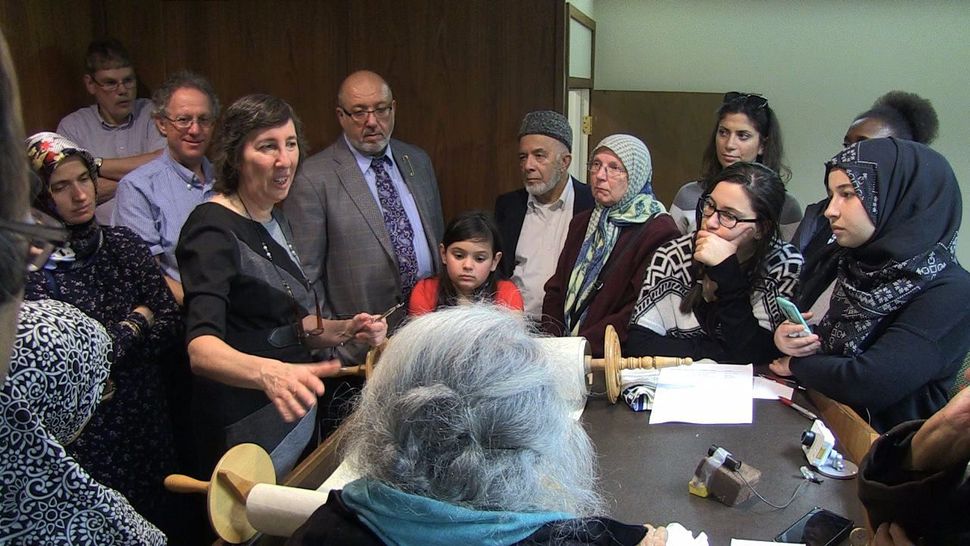 Interfaith dialogue in action. Image by Courtesy of Susan Abramson

If a picture is worth a thousand words, the photograph of Muslims and Jews gathered around an unfurled Torah in the sanctuary of Temple Shalom Emeth, Rabbi Susan Abramson’s suburban Boston congregation, says volumes about her ongoing and notable interfaith outreach. The picture above was taken during an “Evening of Fellowship” with the local Muslim community that included a Shabbat evening service followed by Salaam prayers. “There were 120 people in our sanctuary and I opened the Torah scroll. Our Muslim guests asked a lot of questions and we even picked out words from the Torah that are similar to words in Arabic,” says Abramson.

Abramson also chairs the Burlington’s Interfaith Clergy Council, in a town north of Boston, where her pulpit is located. She lives in the town of Bedford, where almost two years ago a swastika was discovered in the bathroom of a public school. “It was a watershed moment for me,” says the rabbi. “I knew it was time to work with the Bedford clergy too. I helped to create a town-wide effort called ‘Love Your Neighbor, Bedford Embraces Diversity.’”

Abramson has lived the spirit of those words since she was growing up outside of Boston. During that time she was influenced by the late Rabbi Roland Gittelsohn, the senior rabbi at Temple Israel in Boston. Gittelsohn, who led the temple for 40 years, helped to establish a local foothold for Reform Judaism. “He was my rabbi growing up and he was very articulate and charismatic,” notes Abramson. “He inspired me to follow in his footsteps.”

After high school, Abramson entered Brandeis University where she founded a Reform Jewish group and was elected the president of the university’s Hillel in her junior year. That same year she was asked to lead high holiday services for a small Reform temple in Burlington, Massachusetts. That synagogue was Temple Shalom Emeth, which she would return to in 1984 as the rabbi. Her tenure at the temple makes Abramson, who was ordained at Hebrew Union College, the longest serving female rabbi in the state of Massachusetts.

Abramson’s activism began shortly after her arrival at Shalom Emeth when she became engaged in the Soviet Jewry movement. Three families from Latvia settled in Burlington, including her future husband, a computer programmer named Vladimir Dvorkin. He and Abramson wed in 1991 and had a son who is now 21-years-old. Dvorkin suddenly passed away in 2005.

In addition to her interfaith activism, Abramson is the author of the popular “Rabbi Rocketpower” books. The series, featuring the first Jewish female superhero, was modeled in part by her son’s favorite childhood book, “Captain Underpants” and born out of necessity. “I surveyed Jewish books looking for something fun to educate liberal Jewish kids and there was nothing.” Her latest book “Challah: A Chewish Guide to the Torah” combines her hobby of challah baking with analyses of the weekly Torah portions.

Abramson first reached out to her local Muslim community with her confirmation class. She teaches a course to the class that includes a section about Islam and one of the lessons is a field trip to the Islamic Center of Burlington down the street from her temple. On Halloween night of 2015 the Center was defaced. Within 48 hours of the incident, Abramson had organized a rally of more than 100 people supporting the Muslim congregation. In the fall of 2016, Abramson debuted a series on YouTube called “Spiritually Speaking.” She says that the videos were “a response to the situation in our country. It was time to reach out to each other and dispel myths and stereotypes and bring peace and harmony to our country.”

Abramson writes, produces and hosts the half-hour interfaith videos, which are also shown on six area cable channels. The third episode features an interview with Shakeel Rahman Mia, the Islamic Center of Burlington’s young imam. In addition to conversing with Abramson, the imam takes viewers on a tour of the Center and introduces the various rituals that accompany Muslim prayer.

Abramson’s most recent interfaith accomplishment occurred earlier this month in a program called, “Responding to Intolerance: An Interfaith Dialogue.” Hosted by the Islamic Center, four clergypersons – including Abramson, Rahman Mia, a Mormon Bishop and an Episcopal priest – educated the 150 people in attendance about their respective traditions. Abramson further noted, “We talked about incidents of oppression of our faith and what each of our faiths calls upon us to do to help the oppressed.”

Abramson says that the next episode of “Spiritually Speaking,” will explore the Mormon faith. As for her continued outreach to her local Muslim community she quips, “I’m at the Islamic Center so much, I keep a hijab in my car.”