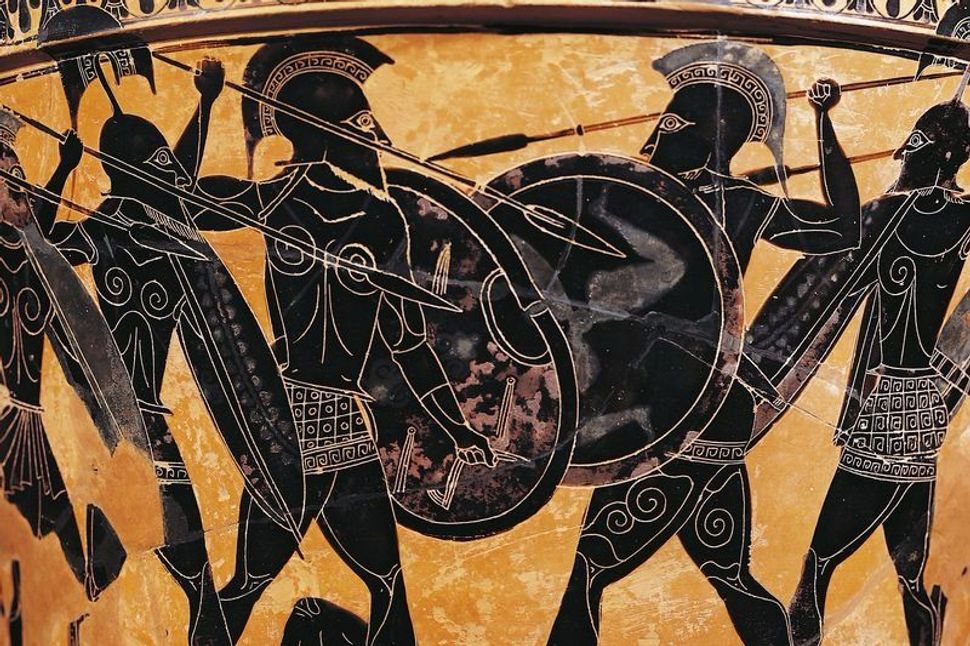 Today’s Hanukkah is a breezy holiday of lights, dreidels, latkes, Maccabeats videos and gifts for the little ones.

Yet its origins are, without question, rooted in a story of bloody violence, which we often gloss over: The story of the victory of the Hasmonean Jewish militants against the Seleucid Greeks.

Later on, after the Hasmonean dynasty had become corrupt and then disintegrated, and a series of armed Jewish revolts against Rome had resulted in massive loss of Jewish life and brutal intra-Jewish violence, the Jewish sages shifted the emphasis of the holiday to being a celebration of the rededication of the Temple (chanukat ha-bayit) and suddenly discovered a miracle that had occurred therein — the menorah that burned for eight days with one days worth of consecrated oil.

The essential meaning had now been shifted from punitive to restorative justice.

Yet the memory of the Hasmonean victory remained like a geological layer underneath, retained in liturgy and story.

The addition to the daily Amidah recited during Hanukah known as al hanissim reads in part:

Now to a certain extent, I can empathize with this. The Hellenic government, who were imperialists and colonialists, did act wickedly towards their Jewish subjects. The revolt led by Matityahu and his son Yehudah was sparked by acts of terror committed against us and our religion by the state.

Yet I know that had I lived then, I would be unlikely to be in the camp of Matityahu and Yehudah. The Maccabees were a rural movement of traditionalists who led a successful guerrilla campaign against the colonialists. They were somewhat akin to a rural fundamentalist militia, a militant resistance movement, or perhaps the violent wing of Indian National Congress before independence.

My disjunction from the Maccabees lies in two places:

One, I would probably have favored diplomacy over warfare and been worried about Matityahu’s militant defense of traditional Jewish life. In pre-Independence India, I probably would have sided with Gandhi.

And two, I also probably would have been a happy member of the urban elite who enjoyed learning from the vast riches of Hellenic culture while retaining my Jewish identity. My hero would likely have been Philo of Alexandria, exalting in the rich interaction between Jewish and Greek ideas, living at the fertile edge of two ancient cultures and sampling the delicious fruits that grew there.

I am not alone in my discomfort with the message of the Maccabees. The sages of the Talmud seem to have been concerned too, when they chose to reduce the celebration of military solutions in Chanukkah, all too aware of the painful results of the less successful revolts of Jewish zealots in 66-73 CE and Bar Kokhba in 132-136 CE, which collectively resulted in the destruction of the Temple and over a million Jewish deaths.

When I light the Chanukkah candles this year, then, I will think of the symbolism of the light in the Temple and the miraculous power of human beings to rebuild what they have lost. This is surely an important reminder in this perilous political time where carbon emissions are higher than ever and the wealthy elites and ethno-nationalists across the world have won unprecedented victories in eroding democracy, justice, and human rights.

I will also turn to more esoteric Jewish traditions, like the Hasidic teaching that the real meaning of Hanukkah lies in its relation to the word for education, hinuch, and the symbolism of light. Like other winter festivals, Hanukkah symbolizes kindling a light of hope, even of defiance, in the midst of darkness. It is a reminder of the importance both of educating our children and of keeping the lines of knowledge and communication open between us, both lessons needed in this time of cuts to public schools and attacks on journalism.

When I light the menorah this year, I will think of the light shining out as the light of solidarity and hope, and when I explain the holiday to others, as I am frequently asked to do at this time of year, those are the words I will use.