Yad Vashem Broadens Holocaust Story by Reaching Out to Haredim 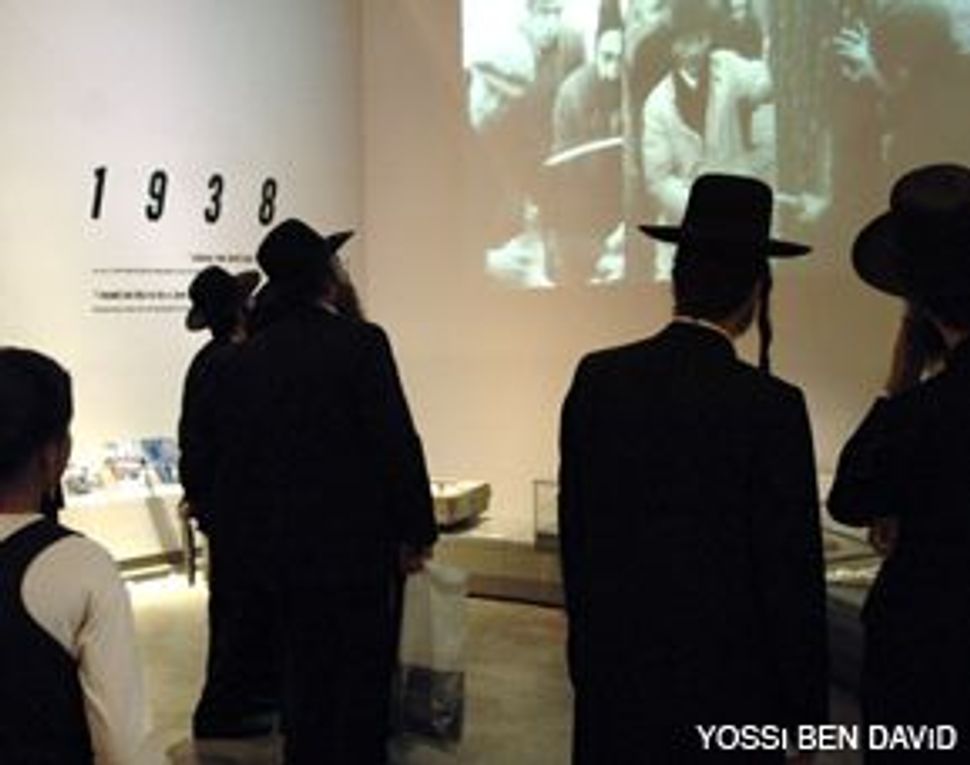 NEW VISITORS: A group of ultra-Orthodox visitors look at a display in the Yad Vashem memorial and museum, which has made a strenuous effort to reach out to Israel?s religious community.

Jerusalem — The Holocaust memorial Yad Vashem was designed as a place for Jews to come together and though it has been the one definite stop for every foreign head of state, until very recently, it has been a recurring source of divisions within the Jewish world. 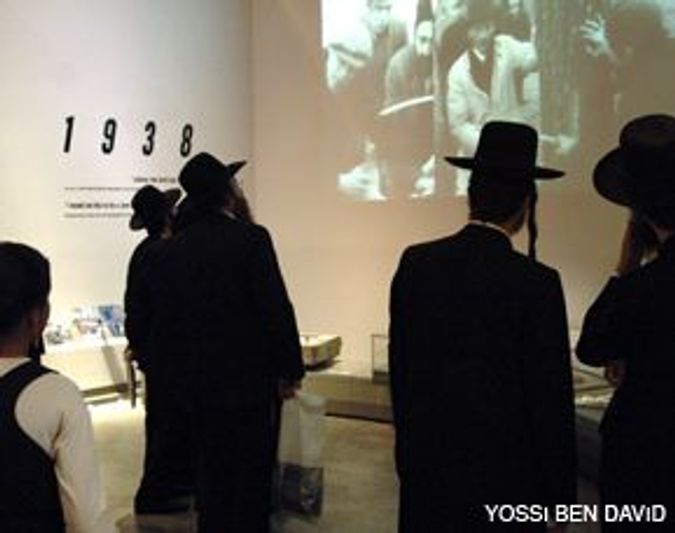 NEW VISITORS: A group of ultra-Orthodox visitors look at a display in the Yad Vashem memorial and museum, which has made a strenuous effort to reach out to Israel?s religious community.

Since Yad Vashem opened in 1953, ultra-Orthodox, or Haredi, Jews regularly accused it of recounting the destruction of European Jewry from a secular-Zionist viewpoint.

Haredi community leaders claimed that the exhibitions insulted religious victims of the Holocaust by portraying them as weak characters who went to their deaths quietly, in contrast to secular Zionists who resisted the Nazis or left Europe to become strong “New Jews” in Palestine.

Tensions reached a breaking point in 1995, when Haredim held mass demonstrations outside the museum to protest the use of photographs of nude Jews being led to their death. Eventually, the museum was forced to remove the photos.

In late October, the leadership of the Haredi community once again descended on Yad Vashem. But this time, the community recognized how much things have changed. The occasion was the launch of a four-book series released by Yad Vashem that documents the Holocaust from a Haredi perspective. In the series, “Years Wherein We Have Seen Evil,” religious victims are presented as heroes for holding on to their faith, or embodying what is termed “spiritual resistance.”

Innovations like this are “a very clear sign that Yad Vashem is going along with the positive aspects of post-modernism and giving recognition to groups that are traditionally on the periphery,” said Mooli Brog, an author on Holocaust commemoration. Brog recently completed a doctorate at Hebrew University on changes at Yad Vashem.

On November 9, in another move that is likely to improved relations between Yad Vashem and the Haredim, the government appointed former Ashkenazic chief rabbi Yisrael Meir Lau, a Holocaust survivor, as chairman of Yad Vashem. Lau, who is viewed as straddling the Haredi and national religious camps, replaces arch secularist politician Yosef “Tommy” Lapid, who died last June.

David Skulsky, director of Ginzach Kidush Hashem, which is one of Israel’s largest Haredi Holocaust commemoration organizations, said that the change within Yad Vashem has been significant: “There is more openness to the Haredi perspective, and a preparedness to listen to our viewpoint.”

“Yad Vashem’s emphasis on heroism in the past excluded Haredi victims,” said Dudi Zilbershlag, who in 2003 became the first Haredi member of Yad Vashem’s board. “But the Haredi perspective is that people who died in the name of God, keeping Torah and mitzvoth, should also be considered part of the heroism in Yad Vashem, and today we are moving toward a situation where that is the case.”

Yad Vashem was closely associated with secular Zionism from its earliest days. The provisional board, set up in 1945, was chaired by Labor Zionist David Remez, a signatory of Israel’s Declaration of Independence. The declaration’s creation in 1953 was brought about by an act of the Knesset.

With these Zionist credentials came a certain reading of the Holocaust. In the museum’s reading there was no nostalgia for prewar Europe: Jews were now safe in the Jewish state and establishing a new, enlightened Jewish culture.

The Haredi reaction was very different. The religious life that was being established by European Jews in Israel was considered a shadow of its former glory in Europe. Haredim sought to re-create the piety and religious culture of the old country in Israel.

According to Tel Aviv University academic Arye Edrei, an expert on secular-religious clashes over Holocaust commemoration, the differing ideologies meant that Haredim focused on the religious culture that was lost. But they tended to avoid the subject of the murder itself. In contrast, Zionists focused on the death but paid little attention to the Jewish culture lost, as they believed that Jewish culture now had its home in Israel.

The rapprochement between the two sides has been a slow development that, according to many, began when Avner Shalev became chairman of Yad Vashem 15 years ago. Shalev, former director general of the government’s culture authority, is widely credited with having ushered in a new approach to commemoration where less of a traditional Zionist interpretation is imposed on events.

Almost as soon as he came into office, there was a development: Yad Vashem’s educators began to move away from the old ideological message and toward teaching the Holocaust with reference to the experiences of individual victims and survivors from diverse backgrounds.

According to Edrei, secular Israelis, encouraged by such people as Shalev, are becoming increasingly interested in learning about what life and religious identity were like before the Holocaust.

At the same time, experts on the Haredi world said that the growth and success of the community have changed attitudes toward the Holocaust. Dan Michman, Yad Vashem’s chief historian, said that “for decades, Haredi society in many ways secluded itself from wider memory and established its own ethos.” Now that the community has “revived itself post-Holocaust,” it “wants to be involved in the national memory,” he said.

One of the biggest steps in the developing relationship was the opening of a new museum at Yad Vashem in 2005. The old museum focused on the scale of the Holocaust but did not include a single personal testimony. In the new museum, there are 90 personal stories. They focus on the experiences of a diverse group of people, some of whom are religious survivors who talk about such issues as the challenge of religious observance during the Holocaust.

“The collectiveness and concentration on symbols in the old exhibition has been exchanged for more individual and personal narratives,” Brog said.

Since the new museum opened, Yad Vashem has made particular efforts to woo the Haredi sector. There have been special courses for educators on teaching the Holocaust in Haredi areas, and gender-separate classes for members of the religious public.

There is also talk of more changes to make the Haredim more comfortable with the museum’s ideological outlook. Talks are under way between Yad Vashem curators and Haredi leaders about the possibility of changing displays on the Warsaw Ghetto uprising — viewed in Zionist ideology as the pinnacle of resistance. The Haredim have suggested including such people as the Piaseczno rebbe, Kalonymus Kalman Shapira, who ran a secret synagogue, solemnized marriages and gave inspirational speeches until 1943 when he was deported to and killed in the Trawniki work camp.

“There is a process of changing collective memory where the narrative people carry of the Holocaust is today much wider than it was,” Vinitzky-Seroussi said. “It’s no longer about having one narrative, the narrative of the Warsaw Ghetto heroism, but about something much deeper where there’s a place for heroism — now different kinds of heroism — and victimhood. In many ways, Yad Vashem is not leading that shift, but following.”

Yad Vashem Broadens Holocaust Story by Reaching Out to Haredim