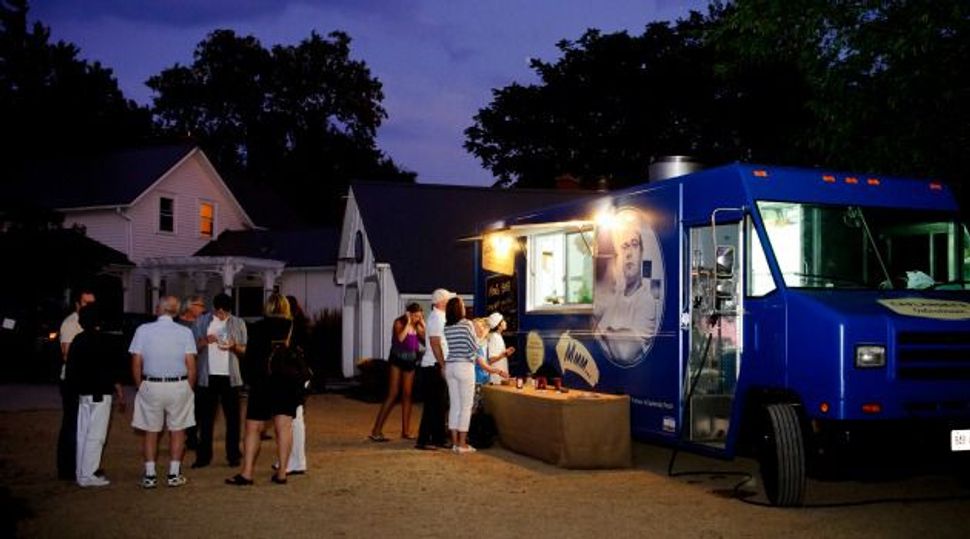 When culinary historians look back at the first two decades of the 21st century, they’ll no doubt conclude that this was the golden age of food trucks. Brightly colored trucks with kitschy names roll out onto the streets of cities across North America each day, dishing out delicacies like artisanal ice cream sandwiches, snacks from the Far East and gourmet tacos roadside.

This is particularly good news for lovers of Jewish cuisine. From Austin to San Diego to Atlanta, trucks have been doling out a range of Jewish and kosher food. In Los Angeles you can munch on egg rolls stuffed with corned beef; in Toronto, sample divine deli sandwiches served out of a truck with a pickle spear, and in New York, feast on a perfectly fried falafel.

Though the Jewish gourmet food truck may be a product of the 21st century, its roots go back to the early 20th century Jewish street food of Manhattan’s Lower East Side. Men with knish carts plucked savory pastries out of warming drawers, serving up a quick and portable lunch for workers on the go, while Jewish families bought ingredients from pushcart peddlers. “You could pick up a cup of seltzer, a chunk of bread, a herring and a pickle and cobble together a funny little meal,” Jane Ziegelman, the curator of the Lower East Side Tenement Museum Food Series told the Forward.

In the roughly 100 years since then, the tradition of street food spread across the country. Pushcarts morphed into venues both for those seeking a quick, kosher lunch or for Jewish food enthusiasts less concerned with dietary restrictions. It wasn’t always the most appealing cuisine: Greasy knishes sold from lackluster food trucks ruled the scene for decades. But in May 2011, former “Top Chef” contestant Spike Mendelsohn sparked a revival of moving deli done right with his Sixth and Rye truck, which had D.C. customers waiting in half-hour lines for mouth-watering pastrami. Dozens of like-minded foodies followed in his wake, breathing new life into the kosher food truck scene.

Some trucks are strictly kosher; while others just celebrate the soul of Jewish-American cuisine. In honor of a century of mobile Jewish-American fare, we selected the stand-out Jewish food trucks from all over the states (and Canada, too).

If you could have one food truck stop outside of your office for lunch, which would it be?

The Deli on Wheels

A Taste of the Homeland

Schmuck With a Truck in Los Angeles, Calif.