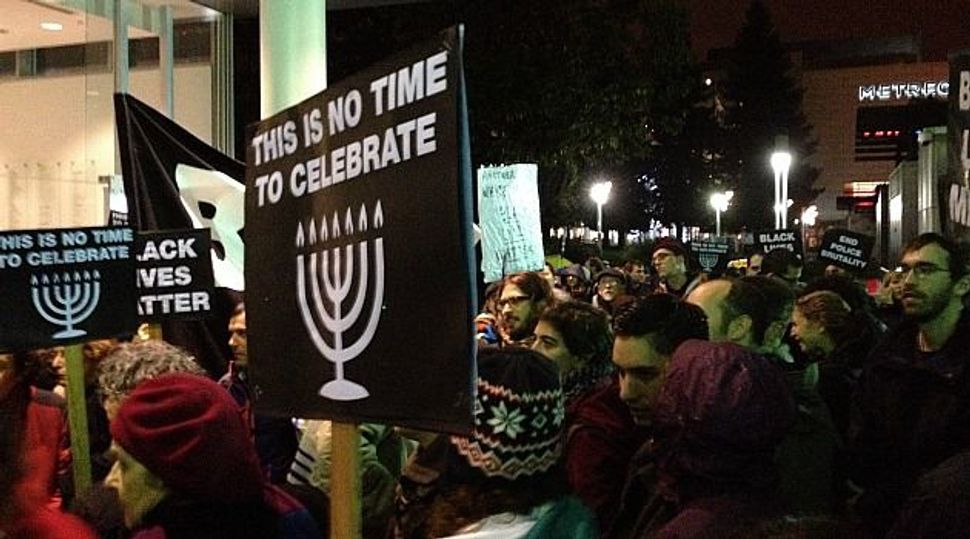 Time for Anger: Jewish protesters march against racism and police brutality in San Francisco on first night of Hanukkah. Image by getty images

As the first candle of Hanukkah was lit last night, several hundred Jews blocked traffic in San Francisco. The swell of protestors engulfed the busy intersection of Powell Street and Market Street, and a four minute and twenty eight second long moment of silence was held, followed by a recital of the mourner’s kaddish.

This act of civil disobedience was part of #ChanukahAction, a national Jewish movement calling on Jews to support black liberation and end police violence throughout the eight days of Hanukkah.

The website acts as a hub for the various actions occurring in each city, provides a ritual toolkit, and supplies a list of principles and demands for those organizing actions. There is no single group that takes credit for the movement.

“Just like we asked pharaoh once to dismantle an unjust system, so too are we now, calling up on the pharaohs to dismantle our current racist system,” said Rabbi Michael Rothbaum, co-chair of the Bay Area Regional Council for Bend The Arc, one of the speakers at the protest.

The first night of Hanukkah saw large protests in 15 different cities across the country. Actions in each state differed slightly in their form and participation, but the message was uniform: to publicly mourn the deaths of unarmed black men at the hands of police and to further the political demands of Ferguson Action, a national organizational group.

Most protests involved listing the names of the deceased, holding respectful silence, and a group recital of the mourner’s kaddish.

In Brookline, Massachusetts, a group of nearly 300 protestors marched from Kehilath Israel Temple to Coolidge Corner, where they took over the intersection. In Brooklyn, Jewish protestors assembled at Barclay’s Center and held a candle-lit vigil at the 78th precinct, holding a large yellow banner that declared “Jews and Arabs Say: Black Lives Matter”. Cities such as Detroit, Philadelphia, Seattle and Durham, North Carolina also held protests. 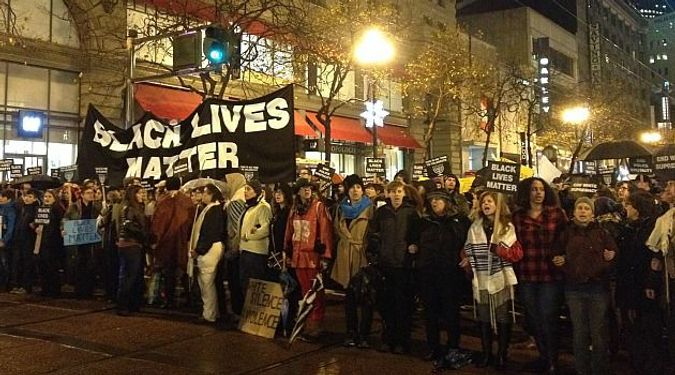 The actions marked the 22nd consecutive day of protesting across the nation, all in the wake of the St. Louis grand jury’s decision not to indict officer Darren Wilson in the fatal shooting of unarmed teenager Michael Brown. These demands include reforming local law enforcement across the country, a comprehensive review of systemic abuses by police, and shifting law enforcement funds to support community based alternatives to incarceration.

“Jews belong in the fight against corruption,” said Rothbaum. “We need to be quiet and listen to the voices and stories of people of color around us, to have the awkward conversations that need to happen, to listen to the call of the shema.”

Rebecca Pierce, a biracial Jewish Bay Area resident whose family comes from Ferguson, Missouri, was invited to speak at the beginning of the San Francisco march. She expressed her dissatisfaction that there were few Jewish people of color involved in the planning, and urged the Jewish community to address issues of racism that exist within Jewish groups.

Despite the predominantly white protest, she said that the action was “really moving and powerful, the energy was directed in the right place.”

“It is the job of allies to bring attention to what is going on and to do what is asked of them by people of color. And I think they did that tonight,” said Pierce.