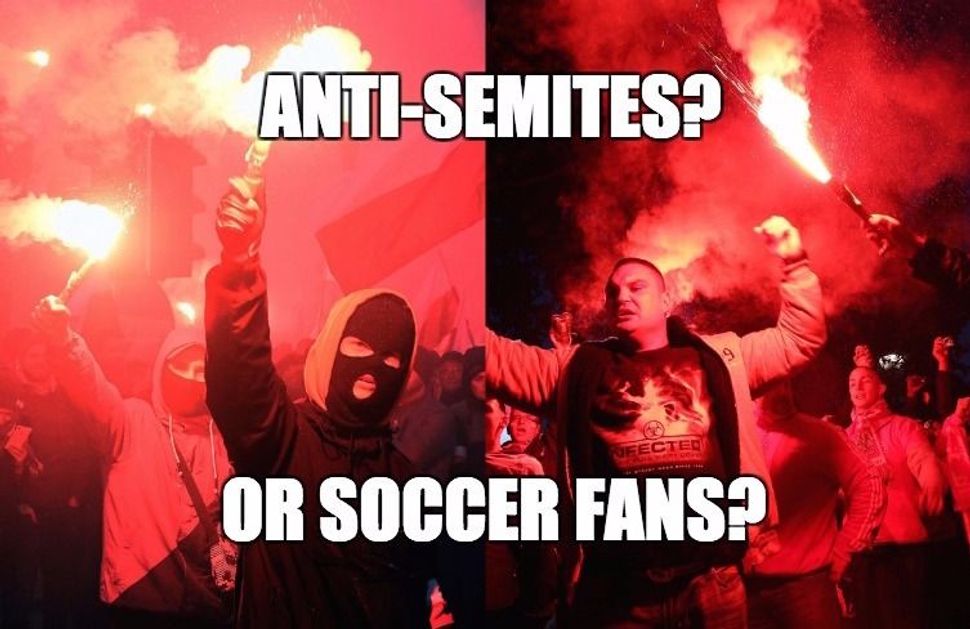 Fascist demonstrators are on the left, and Polish soccer fans are on the right. Image by Getty/Facebook/Forward Montage

In the wake of the United States’ failure to qualify for the World Cup, which will be held in Russia, 23andMe has announced a new partnership with FOX Sports that will try to get fans pumped up by encouraging them to root for the country of their ancestors.

It sure is nice to feel genetic license to root for World Cup behemoths like Brazil, Spain and France. But where does this leave the Jews?

First of all, if you’re Sephardic, you’re in luck. Because Sephardic Jews have historically been genetically very intermixed into their local populations, there are few reliable genetic markers to distinguish a Sephardic Jew from Morocco from a non-Jewish Moroccan, for example.

That leaves the door open to have a more accurate idea of which country your family comes from. If your Jewish ancestry goes back to Morocco, Egypt or Iran, congratulations — each of those countries’ national teams will be in this year’s World Cup.

It would be extremely difficult to tell a Jew with, say, Polish ancestry from a Jew with Russian ancestry. By the way, both the Polish and Russian teams qualified for the World Cup. The same is true for slightly more far-flung Ashkenazi Jews — say a Lithuanian and a Romanian. Neither of those countries made it to soccer’s big dance.

This week, 23andMe unveiled an ad for the new partnership, titled “Root For Your Roots.” “Can you feel it?” the ad says. “You’re connected to the World Cup. It’s in your DNA.”

Andy Kill, a spokesman for 23andMe, wrote in an email that “It’s most likely those of Ashkenazi Jewish descent will receive ties to Poland or Russia based on our ancestry composition report.” He added that Ashkenazi Jews could get additional suggestions based on their “ancient” genetic origins. Israel didn’t make the cut for this year’s World Cup.

Anti-Semitism has always been a problem in Poland, but it seems to be reaching a fever pitch in recent years. In February, Poland’s president signed a law making it illegal to say that the Polish people or its government were complicit in the Holocaust — a well-established historical fact. An Auschwitz tour guide’s home was recently defaced with a yellow star and the words “Poland for the Poles.”

Russia has its fair share of anti-Semitism as well. In the wake of a fire in a movie theater in Siberia that killed 64 peoplein March, Russian conspiracy theorists quickly blamed the Jews. Earlier in March, Vladimir Putin suggested that Jews may have been behind the hacking of U.S. elections.

When 23andMe encourages Americans to support the country their DNA comes from, they may not realize that not all Americans have a rosy view of that particular country.

Plenty of American Jews are big soccer fans, and may choose to support any number of teams. If you want to root for Germany, you’ll have to reign yourself to the neo-Nazis in the fan base. Some English soccer fans also seem to have a thing for anti-Semitic chants. (It’s mostly about a rivalry with a club that has many Jewish supporters.) Oh, and some Italian soccer fans really hate Anne Frank.