Israel Critics Poised To Shake Up New Congress — #BlueWave Or No 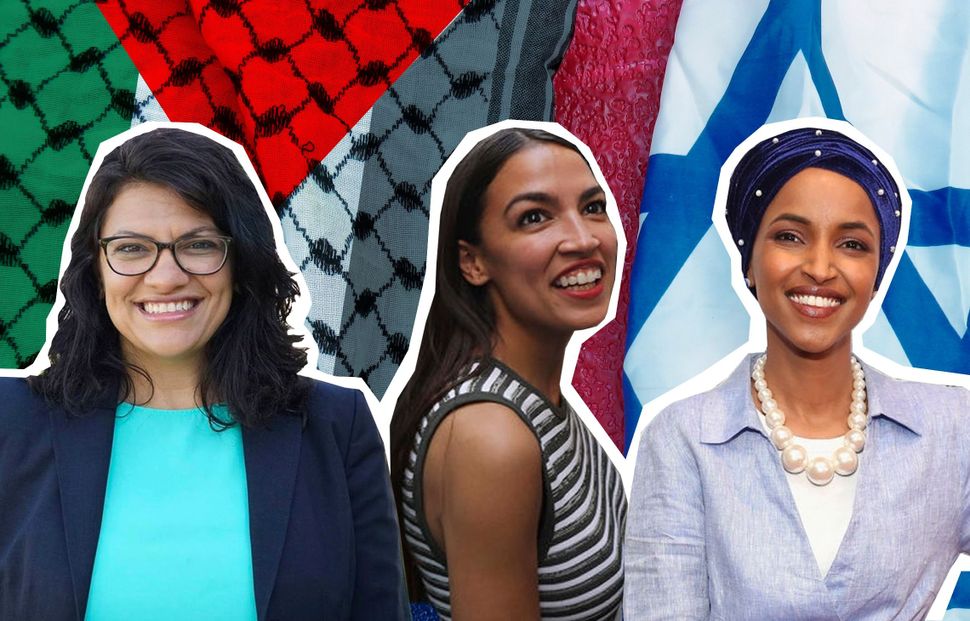 No matter whether Democrats pull off a #BlueWave tonight, the new Congress is already certain to feature several new members who are openly critical of Israel and unconditional American backing of the right-wing government of Prime Minister Benjamin Netanyahu.

At least four incoming Democrats who are sure to win tonight have harshly criticized Israel and its occupation of Palestinian-claimed lands. A handful of other candidates who have good chances of winning have also taken similar stands.

The shoo-ins, who are all women of color, include Rashida Tlaib of Detroit and Ilhan Omar of Minneapolis, who are set to become the first Muslim women members of Congress; leftist rising star Alexandria Ocasio-Cortez, who shocked the political world with an upset primary win in Queens; and Ayanna Pressley, who won a majority-minority district in Boston from a longtime Democratic incumbent.

Even if Democrats take control of Congress, the quartet are unlikely to play a major role in Israel policy because it would be controlled by establishment Democrats who strongly back Israel.

But they could wind up being harbingers of a Democratic Party that is much more divided over Israel policy in coming years, especially as the party moves to the left and elects more minority candidates, who tend to be more sympathetic to the Palestinian cause.

Tlaib, a Palestinian-American former state representative who did not have a Republican opponent in her district, will likely become the first Democrat in Congress who backs the boycott, divestment and sanctions (BDS) movement against Israel and supports a one-state solution (some pro-Israel Republicans have said that they oppose the existence of a Palestinian state, essentially endorsing a one-state solution as well).

Tlaib said in an interview after her primary victory in August that she would backs BDS and a one-state solution and would vote to cut off American military aid to Israel. This led the dovish Jewish lobby group J Street to retract its endorsement.

She will be joined in the history books by Omar, a Somali-American refugee and state representative. Omar said during during a primary debate held at a local synagogue that she did not support BDS because it hindered the likelihood of a two-state solution, which she supports. But she has still expressed disgust with Israeli actions: She tweeted in 2012 after an Israeli army operation in Gaza: “Israel has hypnotized the world, may Allah awaken the people and help them see the evil doings of Israel.” After she was called out on the tweet in May 2018 by someone who accused her of anti-Semitism, she responded, “Drawing attention to the apartheid Israeli regime is far from hating Jews.”

Also traveling to Washington will be Ocasio-Cortez, who won a surprise primary upset in her New York City district despite receiving flak for denouncing Israel’s shooting of Palestinian protesters as a “massacre.” (Hamas, which the United States designates as a terrorist group, claimed many of the dead as their members). In a PBS interview after her victory, Ocasio-Cortez was unable to explain what she meant when she said “the occupation of Palestine,” explaining that “Middle Eastern politics is not exactly at my kitchen table every night” but promising to “learn and evolve on this issue.”

Tlaib, Omar and Ocasio-Cortez were condemned by many national Jewish and pro-Israel groups for their Israel stances, though they were welcomed by members of left-wing groups like Jewish Voice for Peace.

A fourth Democratic woman of color slipped under the radar: Pressley, the Boston city councillor who, like Ocasio-Cortez, defeated a white, male incumbent in the Democratic primary in her majority-minority district before easily winning in November. Although Pressley says on her campaign website that she does not support BDS, she did express support during the primary for a bill that would ban the United States from funding Israeli detentions of Palestinian children.

The bill was authored by Rep. Betty McCollum of Minnesota, who has represented St. Paul since 2001 and is one of the capitol’s biggest advocates for Palestinian rights. McCollum made headlines last month when it was reported that she described Israel’s new nation-state law as “apartheid” while accepting an award from the U.S. Campaign for Palestinian Rights.

The bill received 29 co-sponsors — still a small minority of the Democratic caucus, but includes young rising stars like Seth Moulton of Massachusetts and Pramila Jayapal of Washington state.

Some in the Jewish community are skeptical of the possibility of an anti-Israel flank growing on the left.

“We’re talking about a handful of people; they’re certainly not going to move Congress’s wall-to-wall support for Israel,” the executive director of the Jewish Community Relations Council of Greater Washington, Ron Halber, told The New York Times last month. “Could it turn into a ripple? Perhaps. You have a unique combination of forces right now.”

But some experts think the voters electing these representatives, especially the most left-wing ones who are more likely to participate in the primary process, may not share the national party’s consensus.

“We’re seeing a pattern where the activist core of the Democratic Party is becoming highly critical of Israel almost as a default position,” Brooklyn College history professor KC Johnson told the Forward after Ocasio-Cortez’s victory.

Three other candidates who were criticized during the campaign for their Israel stances may succeed in their tighter races.

Leslie Cockburn, a journalist running in Charlottesville, Virginia, was called a “virulent anti-Semite” by the state Republican Party because of her past writings about Israel. A 1991 book she co-wrote, “Dangerous Liaison: The Inside Story of the U.S.-Israeli Covert Relationship,” was described by The New York Times in its review as “largely dedicated to Israel-bashing for its own sake. Its first message is that, win or lose, smart or dumb, right or wrong, suave or boorish, Israelis are a menace. The second is that the Israeli-American connection is somewhere behind just about everything that ails us.”

Scott Wallace, a philanthropist running in one of the most competitive races in the country in the heavily-Jewish suburbs of Philadelphia, was excoriated by some in the Jewish community after the Forward revealed that his family foundation had given more than $300,000 to pro-BDS organizations (Wallace went on to say that he did not control those donations and that he is against BDS).

And Antonio Delgado, running in the Catskills region of New York, was panned for saying in a debate that Israel “is not a Jewish democracy” due to its settlement activities. “He clearly misspoke, he just screwed up. The Republicans will jump on this,” a Democratic insider told the New York Post soon after. Delgado, who has a Jewish wife and is raising his children Jewish, later clarified to Jewish Insider that he had a “deep personal and family connection to the state of Israel” and supported a two-state solution in order to ensure Israel’s long-term security.

Rep. Eliot Engel of New York, who is Jewish and will become the chairman of the House Foreign Affairs Committee in January if Democrats take the House, promised supporters on Monday that his party would continue to support the Jewish state, according to Jewish Insider.

But while the 71-year-old Engel may presently be a leader of his party, he cannot control its future. And many of the history-making young candidates elected for the first time Tuesday, who will likely be ensconced in safe Democratic seats for decades to come, don’t share his steadfast pro-Israel positions.

Israel Critics Poised To Shake Up New Congress — #BlueWave Or No