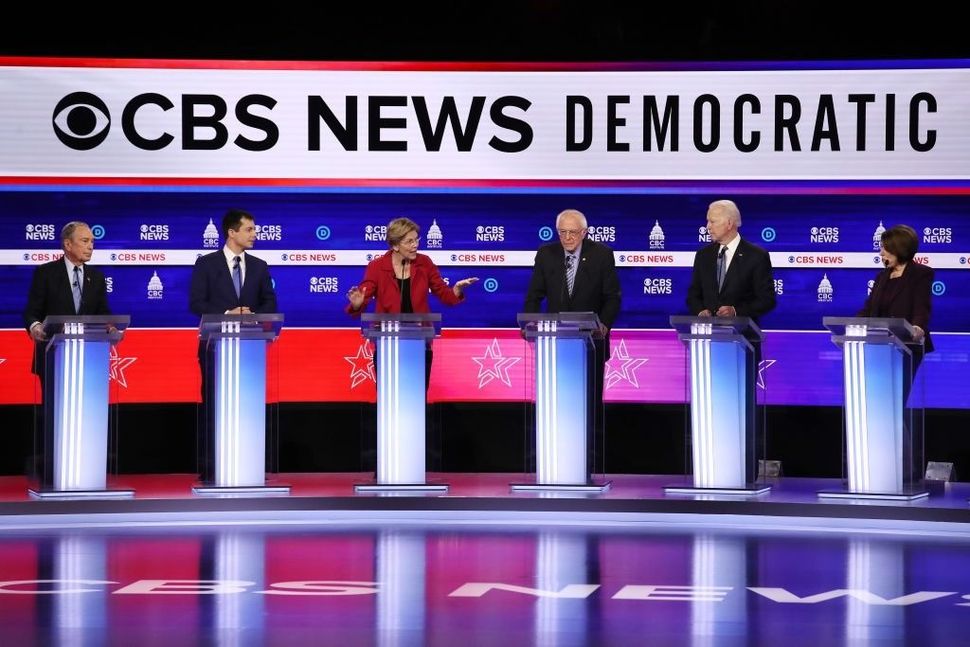 Within the first five minutes, former New York City Mayor Mike Bloomberg asserted that Russian President Vladimir Putin was working to help Sanders get the Democratic nomination so that he would lose to Trump. Sen. Elizabeth Warren of Massachusetts said that Sanders didn’t have the experience to get his ideas enacted. Former South Bend, Ind. mayor Pete Buttigieg said that Sanders would be a divisive figure. And former vice president Joe Biden, a favorite of the audience throughout the night, said that the white nationalist who killed nine people in a South Carolina church was aided by Sanders having voted against gun control measures.

Sanders mostly held his own at the debate, the last before the South Carolina primary on Saturday — and also the last one before Super Tuesday, in which voters in 15 states and territories will make their choices. He and Bloomberg, both of whom would be the first Jewish president, also presented contrasts with their differing views on Israel.

Sanders was mostly able to parry claims that his democratic socialist vision and Medicare-for-All plan would endanger Democratic hopes in November. Sen. Amy Klobuchar of Minnesota described Sanders’s proposal as “A bunch of broken promises that sound good on bumper stickers.” Sanders responded by citing studies saying that his plan would save money in the long run compared to the status quo.

The two former mayors in the race, Pete Buttigieg of South Bend, Ind. and Mike Bloomberg of New York City, argued that Sanders would cause the Democrats to lose the House of Representatives, not just the White House. “Can anyone in this room imagine moderate Republicans voting for him?” Bloomberg asked. He went on to point out that he had spent hundreds of millions of dollars supporting moderate Democratic House candidates, and seemed to suffer from a Freudian slip, saying that he had “bought” their victory before changing it to having “got” their victory.

Sanders responded to such charges by pointing out that his favorability was better than any other Democratic candidate and had repeatedly beat Trump in head-to-head polls. “The way we are going to be Trump is, we need a campaign of energy and excitement,” Sanders said. “We need the largest voter turnout in the history of the United States…that is what our campaign is about.”

One seeming faux pas was when Sanders was asked why he had voted to give gun manufacturers immunity from prosecution after shooting massacres. Sanders was booed when he responded by saying that former Vice President Joe Biden had voted for bad trade agreements and the Iraq War. Sanders said he was making the point that everyone makes “bad votes.”

Another attack was a response to Sanders’ appearance on “60 Minutes” on Sunday, when he defended his past praise of the Cuban government by noting that while the Castro regime was authoritarian, it had also introduced a “massive literacy program.” Sanders tried to argue that former president Barack Obama had said the same thing, which Biden disputed; someone in the audience booed Sanders, and he responded, “Really?”

Sanders’ response to his first question, about the state of the economy, included a shot at Bloomberg: “The economy is doing great for Mr. Bloomberg and other billionaires.”

Bloomberg, who was eviscerated by in his debate debut last week, continued to receive flak from the candidates for his past support of stop-and-frisk policing policies and relationships with African-Americans. “I know that if I were black, my success would have been less likely to be achieved,” Bloomberg said.

Warren brought up allegations that Bloomberg told a pregnant employee to “kill it,” which Bloomberg denied. The former mayor, who announced his candidacy too late to appear on the South Carolina ballot, said last week that he was releasing three women from non-disclosure agreements pertaining to allegations of inappropriate behavior at his company. Warren called on him to allow all women who signed such agreements to be released. Bloomberg said that he had addressed the issue and asked to move on. The two also sparred about Bloomberg’s delay in releasing his tax returns.

The two later sparred over Bloomberg’s claim that the end of redlining caused the 2008 financial crisis. Bloomberg said that Warren was “misinformed.”

Bloomberg also seemed to be aiming for a laugh line that didn’t land when mentioning the last debate. “I’m surprised they showed up because I would have thought after I did such a good job of beating them last week that they’d be a little bit afraid to do that,” he said. Few appeared to have laughed.

For the first time this election cycle, the debate included questions about American policy towards Israel. CBS reporter Major Garrett pointed out that Sanders would be the first Jewish president but had upset some Jews when he had decided to boycott the AIPAC Policy Conference. “What would you say to American Jews you’re not, from their perspective, support of Israel’s perspective?” Garrett asked.

Sanders’s response was very similar to remarks he made at a CNN town hall last week.

“I am very proud of being Jewish,” Sanders said on Tuesday. “I actually lived in Israel for some months. I happen to believe that right now, sadly, tragically, in Israel, through Bibi Netanyahu, you have a reactionary racist who is now running that country. And I happen to believe that what our foreign policy in the Mideast should be about is absolutely protecting the independence and security of Israel. But you cannot ignore the suffering of the Palestinian people.”

Bloomberg, who would also be the first Jewish president, did not respond directly to Sanders’ statements. He also called for a two-state solution. “The real problem is that you have two groups, who both believe God gave them the same piece of land,” he said.

Sanders said last week that he would not attend the gathering of pro-Israel advocates, saying he was “concerned about the platform AIPAC provides for leaders who express bigotry and oppose basic Palestinian rights.”

Bloomberg, who will be attending the conference, did not mention Sanders’ boycott in his response, but a few minutes later, his campaign published a tweet calling Sanders’ decision “offensive, divisive and dangerous to Israel.”

To characterize AIPAC as a racist platform is offensive, divisive, and dangerous to Israel – America’s most important ally in the Middle East – and to Jews.

How can Bernie profess he’s the path to unity when he’s already managed to polarize a people and a party?#DemDebate

Besides Bloomberg, another leader scheduled to attend the AIPAC conference is Serbian President Aleksandar Vucic, who was a member of the far-right Serbian Radical Party during the Balkan Wars of the 1990s. Vucic said in the days after the 1995 Srebrenica massacre, in which more than 8,000 Muslims were killed, “For every Serb killed, we will kill 100 Muslims.” Vucic has said that his remarks were taken out of context. Vucic later went on to serve during the 1999 Kosovo War as Minister of Information under Yugoslav President Slobodan Milosevic, where he was accused of broadcasting propaganda that demonized ethnic minorities.

(Disclosures: I interned for AIPAC for a college semester, and Forward editor-in-chief Jodi Rudoren will be speaking at the conference).