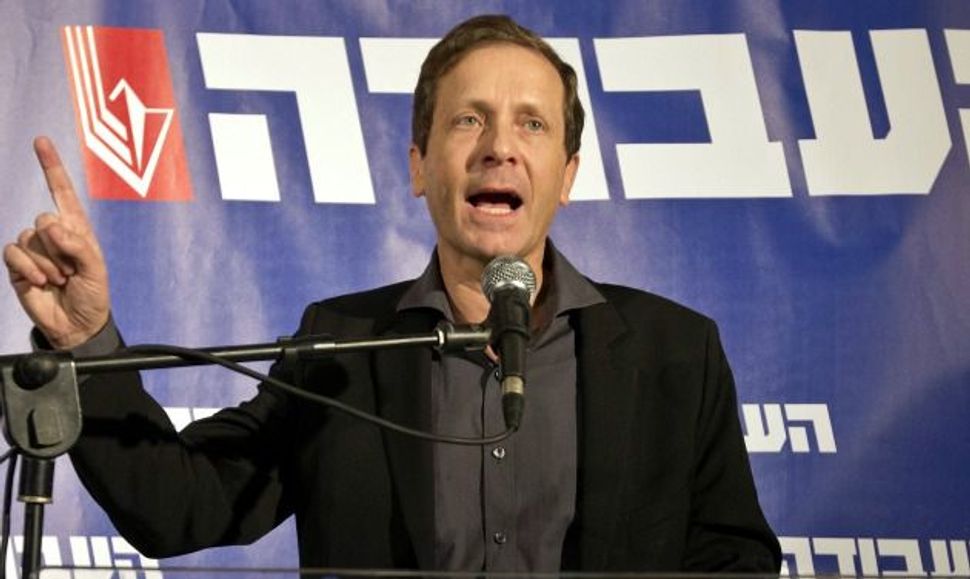 But this time was different. Previous primaries were held after a general election, and leaders were dumped because they’d lost. Yachimovich, by contrast, did fairly well in the 2013 Knesset elections. She nearly doubled the party’s Knesset share, from eight seats to 15. What she lost was the trust — indeed, the patience — of her colleagues and the party membership. This time it wasn’t about Labor, but about Yachimovich. Virtually every senior figure in the party complained bitterly of her high-handedness, her inability to work in a team, her refusal to share decision-making. The poison finally filtered down to the rank and file.

Labor’s new leader, Isaac “Buzhi” Herzog, steps into an unusual situation. He’s well liked by his colleagues and popular among the members in the party branches. He was effective as a government minister, particularly in his 2007-11 stint heading welfare and social services. As the son of ex-president Chaim Herzog, grandson of longtime chief rabbi (and namesake) Yitzhak Herzog and nephew of Abba Eban, he has a Kennedy-like aura of aristocracy, something like what Likud “princes” Bibi Netanyahu, Dan Meridor, Benny Begin, Tzipi Livni and Ehud Olmert all had. Unlike Likud, Labor has never chosen a “prince” before.

And, in stark contrast to Yachimovich, those who know Buzhi agree that he’s a genuinely nice guy, a rarity in Israeli politics. The question is whether he has it in him to capture the public’s trust as the leader of the troubled, threatened nation.

It says a great deal about Yachimovich that party leaders who were unseated used to stay on as members of the leadership team, but in Yachimovich’s case, four of her predecessors have left the party. True, two of them, Ehud Barak and Shimon Peres, had left well before she took over in September 2011 because they’d tired of languishing in the opposition. But two others, Amram Mitzna and Amir Peretz, party veterans who had stayed on through numerous leadership changes, left after Yachimovich took over. Both are now senior figures in Tzipi Livni’s party, Hatnuah. Peretz had been Yachimovich’s political mentor. He felt she’d driven him out of the party.

When Yachimovich failed to bring the party into second place in last January’s elections, losing out to Yair Lapid, three candidates emerged from the Knesset caucus to challenge her—Herzog, venture capital whiz Erel Margalit and longtime party insider Eitan Cabel. In the end, Margalit and Cabel decided to unite behind Herzog, an indication of his strength and credibility as a veteran leader.

But he’s never established himself clearly as a powerhouse leader in the public eye. He’s always carried himself as a faithful number 2. The question now is whether he can transcend his new role as party healer and emerge as a national leader.

Compounding this challenge, he takes over in a daunting situation for any leader of Israeli center-left. Labor’s natural constituency is divided among four different center-left parties, all with nearly identical platforms of secularism, economic fairness and strong support for a two-state peace agreement: Yair Lapid’s Yesh Atid, Livni’s Hatnuah, Shaul Mofaz’s Kadima and Labor itself.

Together, those parties hold 42 seats in the 120-member Knesset, versus 31 held by the Likud-Beiteinu bloc of Benjamin Netanyahu and Avigdor Lieberman. Counting smaller satellite parties, the right’s electoral support is reflected in the 31 seats of Likud and Yisrael Beiteinu plus the 12 seats of Naftali Bennett’s Jewish Home—total 43 seats—while the left/peace-oriented bloc’s strength consists of the 41 seats of Labor-Yesh Atid-Hatnuah-Kadima plus the six of Meretz, for a total of 47. If you throw in the 11 seats of the Arab-backed parties, it’s 58.

Considering the leanings of the rest of the Knesset, it’s safe to say that if Bibi decided to freeze settlement construction and declare an end-game based on the pre-1967 lines with land swaps, he could probably reach an agreement with the PLO that could easily pass the Knesset. But it would have to get through the Cabinet first, and that doesn’t seem likely. The 45-odd Knesset members who oppose such a deal are a minority of the Knesset but dominate the current governing coalition. Besides, it’s entirely unclear that Bibi himself is willing to go there. And that’s the only way to get to Yes and end the conflict, whatever Bibi says he’s aiming for.

Could Buzhi do it? He’s willing. But is he the guy who can win the voters’ trust, unite the parties of the center-left and move the ball into the end zone? We’ve never really had a chance to see what he’s made of. We’ll find out soon.