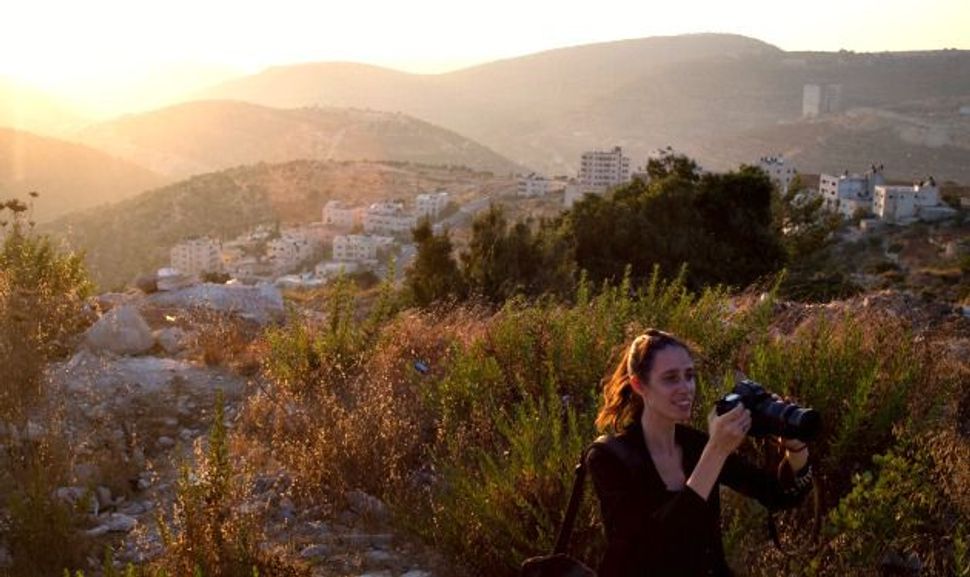 Editor’s Note: The Forward’s story “Iconic Mideast Photo Is a Fake — and Heartbreaking One at That” generated a lot of debate about the ethics of staging photographs. For added insight, we put a few questions to Kitra Cahana, a documentary photojournalist whose work appears frequently in National Geographic, The New York Times and other publications.

Tell us about your own experience as a photographer in the Israeli-Palestinian context.

For the past two years I’ve been working on a project about Palestinians married or in relationships with Israelis. Along with my colleague, Ed Ou, I’ve traveled across the West Bank and Israel, finding subjects who manage their relationships despite many hurdles on both sides. To prepare for this story we spent a month researching until we found subjects who were willing to let us photograph. It took time and journalistic prowess to find these genuine relationships. We could easily have hired two actors and told them to pretend to be in love, crossing back and forth between Israel and the West Bank illegally, but our audience would have learned nothing from those images. Once we had access, we spent weeks and even months with our subjects waiting for moments, natural moments, that would reveal deeper truths about the larger reality that our subjects and ultimately all Israelis and Palestinians are living in.

Have you ever been dismayed by people misappropriating your images online?

It hasn’t happened to me yet, but I don’t know a photographer who isn’t holding her breath, fearful of that day. The internet age has intensified those fears so much more — it heightens all of the potential dramas that can unfold. It makes me more cautious in my practice and in the images that I put into the world and online. There are images that I’ve taken that I don’t want published. Years ago I went to the Congo to do a story about rape as a weapon of war, but upon leaving, didn’t feel that as a journalist I understood enough about the context of the images when I took them. I have no intention of publishing those images.

So, is it unethical to stage photographs?

Each publication has its own line of ethics to follow, but by and large the industry standard in photojournalism is to document reality as you find it. There’s no doubt that our presence as journalists has an impact on the way subjects behave in front of the pen, recorder or camera, but our role is to minimize that impact. Reality, unposed, is beautiful — so rich, so full of nuance and psychological complexities, that to try to stage it ruins all the mystery of capturing something truthful.

With regards to the photograph in question, if, as the Forward reported, Ricki Rosen gave her archive to Corbis and the image was catalogued as “news” without an accompanying caption clearly indicating that it was a photo illustration, then that is an egregious error. It’s the caption that dictates how we’re supposed to read the photograph.

Is there any harm in having Rosen’s photo as an aspirational illustration, an allegory?

Representations of the Israeli-Palestinian conflict are always scrutinized to the nth degree. So when a photograph’s authenticity is called into question, it calls into question broader practices within the journalistic community. And as journalists we survive off the trust that is placed in us.

Besides, to me, the photograph of the Palestinian and Jewish boys looks posed and cartoonish. There are factual inaccuracies — what young boy wears a keffiyeh like that? If someone had spent the time to genuinely find a true relationship between a Palestinian and Israeli — what a beautiful story that would be. And what a beautiful image you could create! Whereas this photograph fuels those who say that peace is an impossibility, that it’s even impossible to find a Palestinian child willing to sit side by side with an Israeli Jewish child and vice versa.

As a comparison, what do you think of Debbi Cooper’s black-and-white image?

Because the photograph represents a true relationship, it’s beautiful. It holds within it the troves of other moments just like it that one could capture, and fall in love with, if one were to document that friendship over time. The photograph itself is still the same soup of clichés — a keffiyeh, a kippah — and it’s still technically a posed photograph. But the context changes everything.

In terms of race politics, do you think it’s problematic to pose a Jew as a Palestinian?

I find it unsettling. I imagine that this assignment was given on a tight deadline. Under that kind of time pressure, I can see Rosen calling up her friend and asking if she could use their child as a subject and dress up one of his playmates as a Palestinian. You reach out to your network and quickly scramble to create the image that your editors are pressuring you to create. You rely on quick identifiers, because iconic photographs usually speak to symbols that already pre-exist within us. But it is problematic. It distorts reality in unnerving ways.