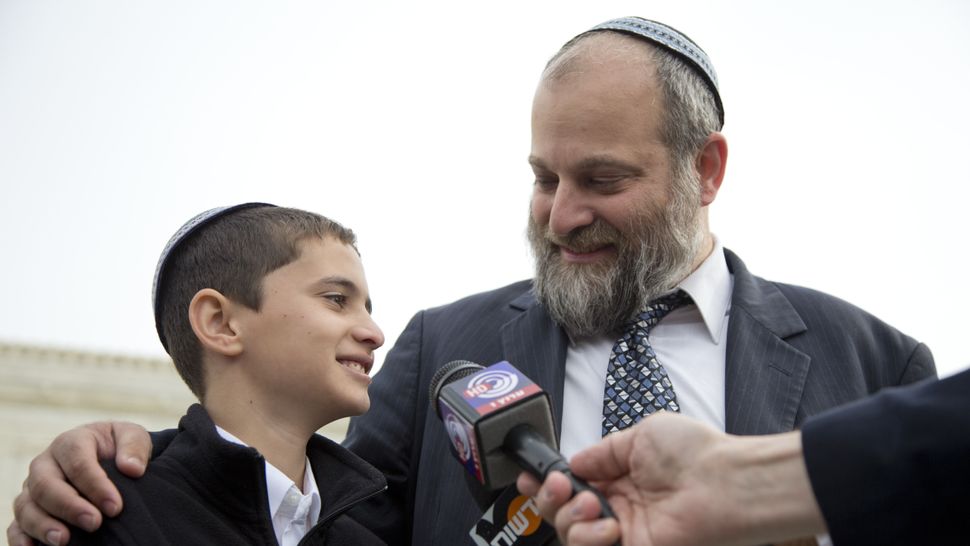 This week’s institutional Jewish responses to the Supreme Court case of Zivotofsky v. Kerry ranged from horrifying to opportunistic to deluded.

This is the case, you will recall, of whether a Jerusalem-born American can list “Israel” as his country of birth on his U.S passport. Congress had passed a law mandating that, but the Bush (43) administration refused to implement it, citing diplomacy and security concerns. The Obama administration followed suit. And this week, the Supreme Court decided, on constitutional grounds, that such decisions are the purview of the executive, not legislative, branch.

The most horrifying Jewish responses to the court decision implied that the court’s Jewish justices – Ginsberg, Kagan, and Breyer – should have voted “with Israel” and betrayed the Jewish state by not doing so. (To be clear, I have not seen this response from institutional leaders – just a wide range of bloggers, commenters, and cranks.) This is misguided on so many levels, it’s hard to know where to begin.

Most importantly, it utterly misunderstands democracy itself. Judges, let alone Supreme Court justices, are meant to interpret and apply the law as they see it – not decide cases based on group loyalty. That is what the rule of law is all about, and the notion that it should be compromised is the civic equivalent of blasphemy.

Moreover, just imagine if the Jewish justices had voted according to their tribe, rather than their reasoning. Surely this would validate the worst anti-Semitic accusations that Jews are not loyal Americans.

Other responses have been less horrifying, but more opportunistic. These have been the chorus of voices trying to lay the blame on the Obama administration, when in fact the legal non-recognition of Jerusalem as Israel’s capital dates back several decades, is near universal among Western nations, and, of course, was implemented in the instant case by George W. Bush.

The manufactured lie that Obama is somehow unfriendly to Israel and to Jews is now the baseline conventional wisdom throughout much of the institutional Jewish community. True, the president seems to have a chilly relationship with Israel’s prime minister, and they sharply disagree about Iran. But Israel’s military establishment also disagrees with Prime Minister Netanyahu on Iran, and no one’s calling them anti-Israel. Meanwhile, the U.S. has also given Israel a nearly blank check when it comes to expanding settlements, stalling the peace process, and shock-and-awe bombing Gaza.

Anyway, this was not the Obama administration’s call, and to conveniently overlook that fact is cravenly opportunistic.

Which brings us to the merely, or perhaps, willfully, confused.

The so-called Conference of Presidents of Major American Jewish Organizations ++said++[[http://www.timesofisrael.com/us-jewish-groups-slam-administrations-hypocritical-view-on-jerusalem/]] it was “deeply concerned” and added its view that “We do not believe that Jerusalem-born American citizens having Israel on their passport would impinge on future negotiations or compromise the role of the United States.” The Anti-Defamation League’s Abraham Foxman said the U.S. policy is “hypocritical and myopic.”

First, having lived in Jerusalem for three years, I can concur with the obvious fact that it is the de facto capital of Israel.

However, de jure, as a matter of international law, Jerusalem is disputed territory. Half of it was captured in a war that international law considers offensive rather than defensive in nature. That characterization may be wrong – is a preemptive strike really an act of aggression? – but it is widely held.

But that position undermines the international rule of law, just as more naïve views undermine the rule of law domestically. Sovereign states do not get to decide their borders at the expense of others. Kuwait is not part of Iraq. Taiwan is not part of China. Cyprus is neither wholly Greek nor wholly Turkish.

As one friend of mine put it, “Just because you say Jerusalem is all yours, doesn’t mean it is.”

And that neutrality is essential if the United States is to pursue its security interests in the region. Some of those involve being an honest broker between Israel and Palestine. But more of them involve building a coalition against ISIS, working with Egypt, and not alienating the Saudis.

So, while it’s nice that the “Conference of Presidents” doesn’t think that a non-neutral stance would “compromise the role of the United States,” they actually have no idea what they’re talking about. A dozen U.S. interests, far more important than what expat Americans want stamped on their passports, would be seriously damaged by a shift in American policy on Jerusalem.

We may not like that fact, but it is a fact. And to suggest that the United States should compromise its interests in the name of Israel’s is, itself, a kind of disloyalty. Israel is just not the only important American interest in the region.

Finally, let’s understand that a change in Jerusalem policy would result in bloodshed – chiefly those of Israeli soldiers and Palestinian protesters. Is this “ministerial change” (Foxman’s words) worth the loss of even a single life? Again, we may not like the fact that Palestinians would revolt if the U.S. changed its policy on Jerusalem, but that, too, would probably be a fact.

In reality, as opposed to the fantasies of Jewish expansionists, the only way to fix this situation is through a negotiated agreement. Then, when the status of Jerusalem is finally settled, of course all countries should recognize Jerusalem (or West Jerusalem, or whatever is decided) as Israel’s capital, since that is what it is.

But we’re not there yet – and it is not the policy of the current Israeli government to get it there. On the contrary, the current Israeli definition of “united Jerusalem” is now used to justify home demolitions, land confiscation, and an expansion of municipal boundaries that now stretches the city (and the imagination) from Ramallah to the Judean Desert. That is exactly the “Jerusalem” that should not be recognized by international law.

I loved my years in Jerusalem, and living there, you can forget that, according to the rest of the world, the area just past the Cinematheque is technically disputed territory. But that’s the point. Wishing, or ignoring, doesn’t make it so. Nor should it.