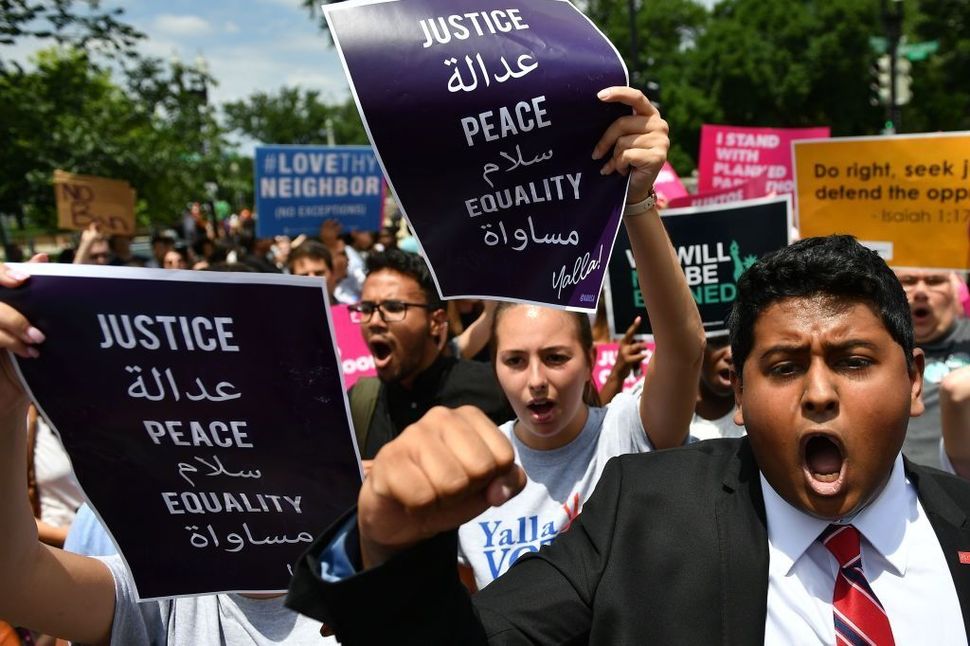 People protest the Muslim travel ban outside of the U.S. Supreme Court in Washington, D.C. on June 26, 2018. (Photo by Mandel Ngan/AFP/Getty Images) Image by Getty Images

Surreal. Disappointing. Disheartening. These are the words that came to my mind this morning, when I first learned that the Supreme Court upheld President Trump’s discriminatory and un-American Muslim travel ban. After a year and a half of working alongside allies and impacted communities to oppose it, I wasn’t surprised by today’s decision — but that didn’t make it hurt any less.

President Trump’s hostility toward Muslims is no secret. He campaigned on banning Muslims from entering the United States, stated in an interview that “Islam hates us,” and attempted to pass travel bans targeting refugees and immigrants largely from Muslim majority countries three different times before finally succeeding. (Those bans, by the way, were rightly struck down multiple times in lower courts.)

At the same time, anti-Muslim hate crimes have risen to their highest levels since 9/11. We have seen brutal attacks on Muslims, or those mistaken for Muslims, with over half of Muslim children being bullied in school and one in every four hijab-wearing women in New York reporting being pushed on the subway platform. Mosques have been bombed and vandalized, and innocent people have been killed. Islamophobic rhetoric, including Trump’s, has real consequences, and so do his Muslim travel bans.

As a refugee advocate, I have heard numerous stories firsthand from refugees separated from their families due to the ban. I’m thinking of Afkab Hussein, a 28-year-old Somali refugee, who was finally resettled in Ohio after living in a Kenyan refugee camp for 25 years. When he left for the U.S., his wife was seven months pregnant. She went through the extensive refugee resettlement process to join Afkab, including time-sensitive security and medical checks. However, due to Trump’s multiple Muslim and refugee bans, she has yet to arrive. Their son, Abdallah, is now two years old and has never met his father. Every time he video chats with Afkab, he asks when he can see his daddy.

This heartbreaking story is just one of many of families that have been affected, and will continue to be affected, by this discriminatory and un-American ban. (This particular iteration has actually been in effect since December 2017). We have already seen this impact on the number of refugees resettled in the United States. Nine months into this fiscal year, we have witnessed a 90% decrease in Muslim refugees resettled. And as a whole, only about 15,000 refugees have been resettled, putting us on track to resettle about 20,000 refugees total. This is deplorable, even considering President Trump’s historically low refugee cap of 45,000.

America used to be known as a place of welcome, a country that took in those fleeing war and persecution. Indeed, many of our early settlers came fleeing religious persecution. Today, America is the opposite. With families being ripped apart at our borders, the rescission of the DACA program, mass deportations, denial of Temporary Protected Status and now support for a religious ban by the highest court in the nation, things are looking grim for our future.

This is not the first time the Court has made an egregiously poor decision. Dissenting Justice Sotomayor referenced Korematsu v. United States, which upheld the state-sponsored internment of 120,000 Japanese Americans during World War II, in her statement as an example as such.

“By blindly accepting the Government’s misguided invitation to sanction a discriminatory policy motivated by animosity toward a disfavored group, all in the name of a superficial claim of national security, the Court redeploys the same dangerous logic underlying Korematsu and merely replaces one ‘gravely wrong’ decision with another,” Sotomayor said.

Still, despite this setback, we will fight back. Muslims and allies are in this for the long haul, and we owe it to those impacted the most, including Americans with family members residing in the seven named countries and refugees writ large, to do so. We will be working with Congress to speak against and work to rescind the ban, block funding for it and conduct oversight to hold the administration accountable for such a bigoted ban.

Religious freedom is not a partisan issue. It is a fundamental value of the United States. And nobody, not even the president or the Supreme Court, can deny that.