How Jared Kushner Flubbed The ‘Ultimate Deal’ — And Hurt Israel 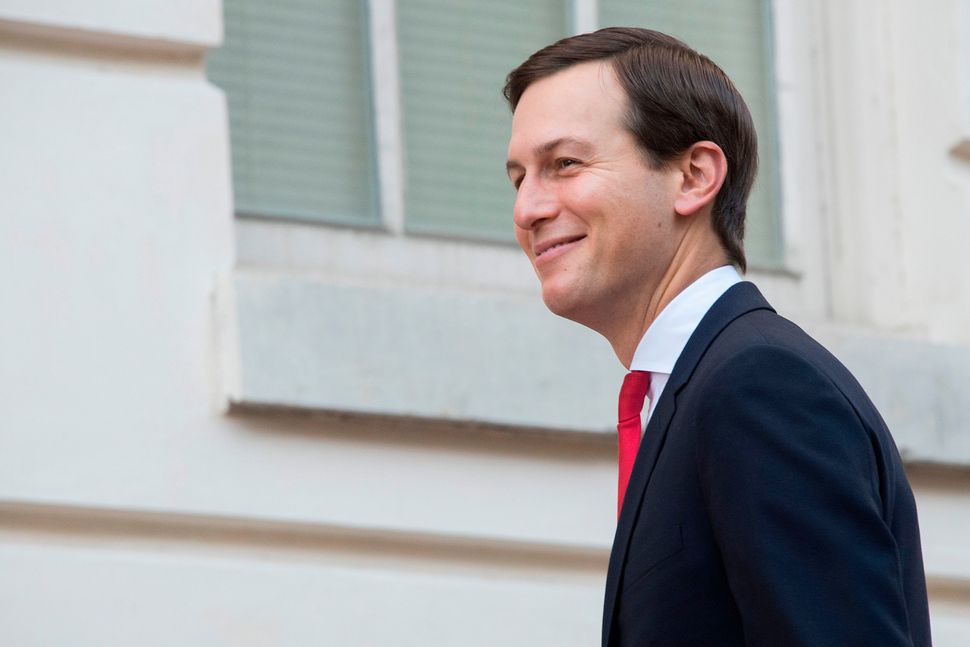 Donald Trump and Jared Kushner do not represent something entirely new in the American government’s approach to Israel and Palestine. Rather, they represent the grotesque exaggeration of features that have long been present. They are the Clinton, Bush and Obama Middle East teams as seen through a funhouse mirror. They constitute the reductio ad absurdum, the end of the line.

They represent the reductio ad absurdum of what might be called “dealism.” Dealism is the belief that brokering an agreement between Israelis and Palestinians is little different than brokering the sale of a building.

From the perspective of the broker — the United States — morality is irrelevant. What matters is getting both sides to sign on the bottom line.

Since the 1970s, and certainly since Bill Clinton got Yitzhak Rabin and Yaser Arafat to shake hands on the White House lawn at the beginning of the Oslo Peace Process in 1993, every American president has practiced “dealism.” Every one has dreamed primarily of solving the Israeli-Palestinian conflict and being remembered as one of history’s great peacemakers.

None has dreamed primarily of being remembered as one of history’s great liberators.

None has described the Israeli-Palestinian conflict primarily as a struggle for rights.

This stands in contrast to the way in which Americans, at least in retrospect, view other conflicts that pitted a population lacking basic freedoms against the state that denied them. Americans don’t generally tell the story of Mahatma Ghandi and Kwame Nkrumah’s struggles against British colonialism, or Martin Luther King’s struggle against white supremacy, or Nelson Mandela’s struggle against apartheid, or the American colonists struggle against “taxation without representation,” as a tale of how the two sides “got to yes.”

When it comes to Israel and Palestine, by contrast, American presidents have generally described America’s core goal not as ending oppression but as negotiating an agreement.

Still, past presidents intermittently acknowledged that Palestinians, collectively as a people and as individual human beings, were entitled to basic rights. In 1999, Clinton affirmed “the right of Palestinians to aspire to live free.” In 2011, Obama told the UN that Palestinians “deserve” a state and lives of “dignity.”

With Trump and company, that is now gone. Trump officials talk about their efforts to “improve the lives of the Palestinians.” But, as far as I’m aware, neither Trump nor Kushner has ever said Palestinians have rights.

Instead, they have relentlessly analogized the conflict to their own experience in real estate. “In every negotiation I’ve ever been in,” Kushner told The New York Times, “before somebody gets to ‘yes,’ their answer is ‘no.’”

Lacking even the minimal moral scaffolding of previous administrations, Trump and Kushner have taken what seems like the shortest path to a deal: They have demanded that the weaker party cave on virtually everything.

The Trump peace plan, from everything we know, would make that vision American policy.

Unsurprisingly, Palestinian leaders have said no. And so the Trump administration — reportedly at Kushner’s direction — has decided, in the name of dealism, to punish ordinary Palestinians for their leaders’ refusal to codify their subjugation.

In late August, the White House announced it was cutting $200 million in aid to the Palestinians. Then it ended funding for the United Nations Relief and Works Agency (UNRWA). UNRWA mostly provides health and education for Palestinian refugees, some of the poorest and most desperate people on earth. It serves half the people of Gaza, who already live in a territory the UN says may be uninhabitable by 2020.

As a result of Trump’s budget cuts, UNRWA warns that it may soon close more than 700 schools.

The White House followed that by cutting $25 million to six hospitals in East Jerusalem, cuts that may cripple the hospital on which many Palestinians in the West Bank and East Jerusalem rely for cancer treatment. Finally, it ended US support for exchange programs between West Bank Palestinians and Israeli Jews.

And it will earn Kushner, the grandson of Holocaust survivors, a special place in Jewish history.

He’s not the first Jew to have disgraced his ancestors’ memory. Few, however, have done so from such lofty heights.

But it’s also the end of the line politically. In stripping dealism of any moral patina, Trump and Kushner are killing it.

Palestinian Authority President Mahmoud Abbas gambled his presidency on the belief that by recognizing Israel and cooperating with it to keep Israelis safe, he could achieve a deal that secures Palestinian rights. Many Palestinians long ago decided that he had failed.

The response among Palestinians, sooner or later, will be to withdraw recognition and withdraw security cooperation. According to Palestinian chief negotiator Saeb Erekat, Abbas may soon announce the disbanding of the Palestinian Authority, which would remove the subcontractor that allows Israel to control the West Bank without picking up the garbage in Jenin and sending its eighteen year old soldiers to patrol every dark alleyway in Hebron.

Even if Abbas blinks this month, as he has before, it’s now only a matter of time.

The next generation of Palestinian leaders may practice violence or (as I fervently hope) nonviolence. But, either way, they’re likely to speak not about deals but about rights.

The implication will be clear: If Israel will not permit those rights, then Israel itself must go.

This discourse is already gaining ascendance on the global left. By destroying the moral foundation of the two state solution, Trump is liberating Palestinians and their supporters to move beyond it. Already, Bernie Sanders has begun speaking not about saving Israel as a democratic and Jewish state, as Obama did, but simply about achieving Palestinian rights.

The progressive Democrats emerging in Sanders’ wake may not endorse one state with full equality between the river and the sea, but neither are they likely to oppose a Palestinian national movement that demands it. After all, what could be more natural for a Democratic Party that is increasingly suspicious of nationalism, religious authority and border walls than to embrace a vision for Israel and Palestine that rejects all three?

Perhaps history would have moved in this direction anyway. But the Trump administration is hastening the shift and solidifying the trajectory.

Congratulations, Jared Kushner, deal maker extraordinaire: by denying that Palestinians have national rights, you’re destroying the chances that Israeli Jews will be able to maintain theirs.

How Jared Kushner Flubbed The ‘Ultimate Deal’ — And Hurt Israel