What Has Trump Done To Us, America? 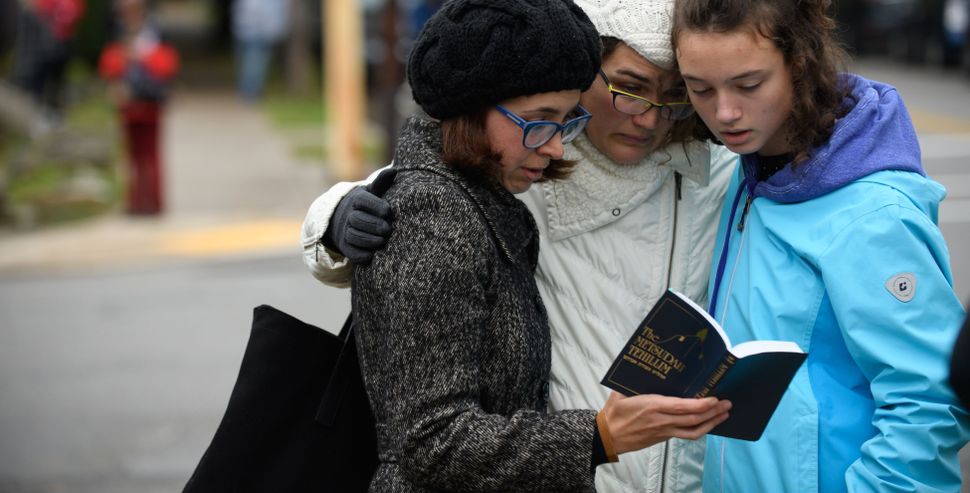 I have one daughter who is a freelance journalist and has reported from all sorts of dangerous places in the Middle East and Africa.

I have another daughter who is a nurse practitioner and right now is delivering health care to the Rohingya, whose plight is creating the fastest growing refugee crisis in the world.

And yet today, the daughter I am most worried about is the one in Brooklyn, who takes her children to synagogue on Shabbat as often as she can.

Because today, a synagogue on Shabbat was a deadly, terrifying place for a Jew to be.

What has happened to America?

We have become a nation in which Jews are increasingly targeted and attacked. The Anti-Defamation League’s annual audit of anti-Semitism found that anti-Semitic incidents rose 57 percent in 2017, the largest single year increase on record and the second highest reported since the ADL started to keep track in 1979.

No one is immune: At least one incident occurred in every state. In schools, community centers and cemeteries. And now, this year, in a synagogue.

What has happened to America?

We have become the nation of immigrants that is turning its back on immigrants, throwing them away from the border, separating families, locking up their children, and portraying them as satanic creatures ready to invade rather than ordinary people fleeing untenable circumstances.

So is it any wonder that Robert Bowers, the man arrested for shooting eleven people dead this morning at Etz Chaim synagogue in the heavily Jewish Pittsburgh neighborhood of Squirrel Hill, was obsessed with HIAS, the legendary immigrant aid society that has helped Jews and non-Jews for more than a century?

“HIAS likes to bring invaders in that kill our people,” he wrote on a social media post that has since been deleted. “I can’t sit by and watch my people get slaughtered. Screw your optics, I’m going in.”

We have become a nation where even the sacred space of worship no longer offers protection against raging white men with guns. (And they are almost always white men with guns.) Etz Chaim in Pittsburgh will now join the ignoble list of religious sanctuaries splattered with blood. Southerland Springs, Texas in 2017 (26 people dead.) Antioch, Tennessee in 2017 (one dead, many wounded.) Charleston, South Carolina in 2015 (nine dead.) The list really can go on.

But very worst of all, we are a nation with a president who stokes this anger — against immigrants, against minorities, against anyone who disagrees with him at any moment — and then, when violence and death stain the landscape, blames the victims for not protecting themselves enough, as if that were the reason for the bloodshed.

It’s time for the Jewish community in all its many facets to confront the complicity of the man in the White House, and all who support him — with money, votes, political expertise and moral cover.

If you want an America where every school, church, synagogue and mosque looks like a National Rifle Association convention, then you are part of the problem.

“These senseless acts of violence are not who we are as Americans,” Pennsylvania Gov. Tom Wolf said this afternoon.

Oh, but it is. It is who we are as Americans. This is who we have chosen to lead us. Every day that he diminishes the grandeur and privilege of his office, he destroys what’s left of our fundamental values — and if we don’t object, he’ll simply do it again.

We need to confront this ugly aspect of the American character and defeat it. That is the only way to take the memory of those murdered today and turn it into a blessing.

What Has Trump Done To Us, America?