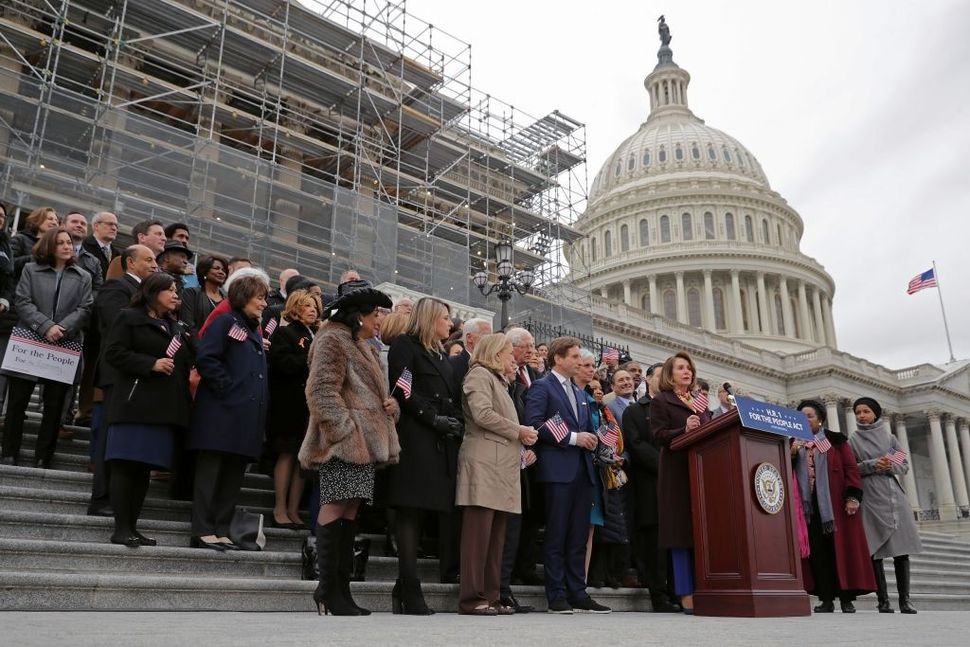 Speaker of the House Nancy Pelosi (D-CA) address a rally with fellow Democrats before voting on H.R. 1, or the We The People Act, on the East Steps of the U.S. Capitol March 08, 2019 in Washington, DC. With almost zero chance of passing the Senate, H.R. 1 is a package of legislation aimed at bolstering voting rights, reducing corruption in Washington and overhauling the campaign finance system in an effort to reduce the influence of ‘special interests.’ Image by Getty Images

This week, Bernie Sanders’ national deputy press secretary accused American Jews of dual loyalty. “This is a serious question: do you not think that the American government and American Jewish community has a dual allegiance to the state of Israel? I’m asking not to rule out the history of this issue, but in the context in which this was said by Ilhan,” wrote Belen Sisa on a Facebook thread about Congresswoman Ilhan Omar’s controversial comments about foreign allegiance.

“This is a serious question: Do you not think the American government and American Jewish community has a dual allegiance to the State of Israel? I’m asking not to rule out the history of this issue, but in the context in which this was said by Ilhan.” https://t.co/SJd55ndvex

She wasn’t accidentally using an anti-Semitic trope. She straight up claimed the trope was true.

And yet, these ugly sentiments didn’t come out of nowhere. Over the past three or four weeks, I have seen my country use criticism of Israel as cover to expose exactly what they think of Jews. Not only have I witnessed people defend using anti-Semitic tropes, but I’ve seen them deploy these tropes themselves while doing so as Sisa did, accusing Jews of being greedy for objecting to prejudice against us and plotting to destroy the progressive movement.

And for the first time in my life, I wondered if I was going to have to move to Israel.

If Omar’s goal in criticizing Israel was to make more Jews less Zionist, it has completely backfired.

Instead of criticizing Israel’s policies, I’m considering packing my bags and moving there.

This is not because it’s convenient or I particularly like Israeli leaders more than American ones. My dream is to work as a filmmaker, so I live in Los Angeles, where I enjoy its progressive laws and not living with the fear of being bombed by anti-Semites. Still, like many American Jews, I support Israel fundamentally because I see it as an emergency exit I can use during the next wave of anti-Semitism.

Progressive opponents of Israel have not won more supporters to their cause these past few weeks; they have instead alerted us that our political climate is a fire hazard that needs an escape route, as it has so many times in Jewish history.

Everywhere I look, I seem more anti-Semitism popping up. Worse, it’s coming from figures I respected, figures I looked to for advice on how to be a better person. And the Democratic Party does not seem to be fervently fighting it.

Democrats have failed to strongly stand up against Omar’s use of anti-Semitic tropes. The anti-Semitism resolution the House of Representatives recently passed does not even mention Omar by name. It is watered down and saturated with whataboutism, as if no could vote to condemn anti-Semitism without mentioning other forms of hate.

And Congresswoman Alexandria Ocasio Cortez, widely believed to be the future of the Democratic Party, painted the criticism against Omar as bad faith attack to destroy her and pointed her finger across the aisle.

Where’s the outrage over the 23 GOP members who voted NO on a resolution condemning bigotry today?

Did they get called out, raked over, ambushed in halls and relentlessly asked why not?

Of course, Ocasio Cortez was misconstruing the fact that many GOP members didn’t vote for the resolution because they felt it did not condemn anti-Semitism strongly enough.

Where’s the outrage over the 23 GOP members who voted NO on a resolution condemning bigotry today?

Did they get called out, raked over, ambushed in halls and relentlessly asked why not?

Do I think these Republicans actually care about Jews? No.

But I felt betrayed when presidential candidates like Bernie Sanders, Kamala Harris, and Elizabeth Warren completely avoided even calling out Omar’s remarks; instead, each just gave a vague statement that criticism of Israel is not anti-Semitism.

No kidding. Liberal Jews aren’t concerned about criticism of Israel. We do a lot of that ourselves. We’re terrified of members of Congress using anti-Semitic tropes that have gotten our people murdered when they criticize the Jewish state.

I expect Republicans to traffic in anti-Semitism, racism, and white supremacy; they didn’t stand against hate during Charlottesville and have no plans on doing so unless it’s to “own the Dems.” But when the Democratic Party, the champions of social justice, excuses anti-Semitic rhetoric by its own members, it means that the fire has spread across the aisle. It’s time to evacuate the premises.

When hatred against Jews can happen on Congress’ watch, it means Israel is more necessary than ever.

When anti-Zionism becomes anti-Semitic, it makes American Jews like me more hesitant to question Israeli policies; for it affirms the idea that my survival is intertwined with that of the Jewish state.