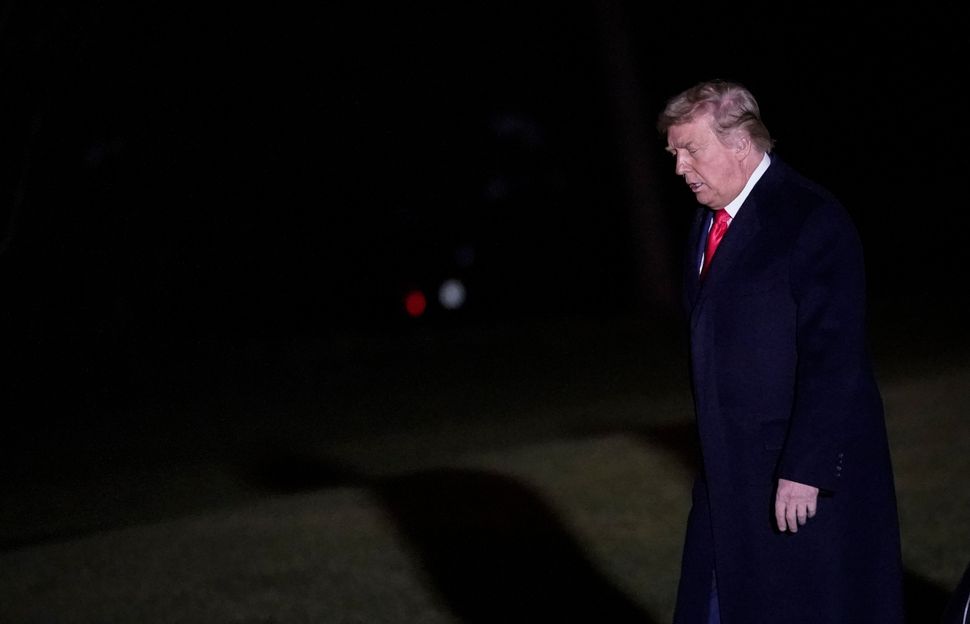 President Donald Trump walks to Marine One on the South Lawn of the White House on January 4, 2020. By Drew Angerer/Getty Images

President Trump is not a man inclined to graciously accept political defeat.

Of course, we knew that long before this past weekend. But on Sunday, the Washington Post published the audio and transcript of an extraordinary phone call between President Trump and Georgia Secretary of State Brad Raffensperger, in which Trump baldly asked Raffensperger to steal the Georgia presidential election for him.

“I just want to find 11,780 votes, which is one more than we have because we won the state,” Trump said. Lest Raffensperger not take the hint, Trump menacingly reminded him that not complying would be a “big risk.”

Even by the standards of a deeply debased president, this was a new low. A president openly attempting to coerce a government official to “find” — or, more explicitly, invent — enough votes to give him a narrow win in a state he lost in a free and fair election is a moment that has echoes of the most deeply authoritarian episodes in American and world history. Legal experts reported that Trump might have violated a Georgia state law against solicitation of voter fraud and extortion.

But Trump did something far worse than potentially violate the law. He broke the moral compact that says that a leader has to be willing to accept defeat.

Jewish tradition is shot through with a deep skepticism of centralized political power with no external checks placed upon it. The Torah broadly focuses on three discreet kinds of political power; to paraphrase the scholar Stuart A. Cohen’s “The Three Crowns: Structures of Communal Politics in Early Rabbinic Jewry,” those were the religious priesthood, the king’s royal throne, and the voice of the Hebrew prophets. The latter were given their prophetic voices in part to criticize those in power and act as a check on authoritarian governments.

“Neither Scripture nor early rabbinic writings express any sympathy whatsoever for a system of government in which a single body or group possesses a monopoly of political authority,” Cohen writes.

In short, at a time in history when authoritarian kingships were the rule across much of the world, the Hebrew Scriptures dared to suggest that there should be checks on a king’s authority from multiple other centers of power.

The idea was, in its time, a radical innovation. Today, its necessity is once more clear. We must contend with a president who wants to undermine the multiple centers of power in the United States — the system of checks and balances in which each of us is taught to place faith — so as to assert a singular right to determine the future of American government.

But the lessons from Jewish history about the importance of sharing power, and the importance of leaders accepting the legitimacy of their defeats, go beyond those in the Hebrew Bible. In fact, we need look no further back than the darkest days of the last century.

In the wake of Germany’s shattering defeat at the hands of the Allied Powers in the First World War, a shocking number of German leaders refused to accept that Germany had legitimately lost the war. This fantasy fueled many of the pathologies of interwar German politics, and ultimately helped lead to the rise of Nazism.

While the fact was that Germany was defeated on the battlefield by the militarily superior and better supplied Allied Powers, military leaders such as Paul von Hindenburg and Erich Ludendorff refused to accept that they had been truly defeated, and decided instead to place the blame on political leaders who supposedly lacked the stomach to continue the war effort.

Over time, that refusal, paired with the fact that German troops remained in the trenches at the time of the war’s end in 2018, fed a myth that the military could not only have fought on, had their political leaders not been so cowardly, but could have won. This baseless belief, known as the “Dolchstosslegende” or the “stab-in-the-back myth,” suggested that treacherous, unpatriotic elements within Germany itself were responsible for Germany losing the war.

The rest is history. Allegations of disloyalty to Germany were mostly leveled at Social Democrats and other political leftists; soon enough, German Jews were being blamed for insufficient loyalty to the German state during World War I. As Jochen Bittner recently wrote in The New York Times, “Military officers, monarchists and right-wingers spread the myth that if it had not been for political sabotage by Social Democrats and Jews back home, the army would never have had to give in.” Right-wing publications produced grossly antisemitic cartoons depicting perfidious Jews stabbing noble German soldiers in the back. One conspiracy theory can’t be blamed for the advent of Nazism, but neither can its influence be understated.

For all the many legitimate critiques that one might level against him, Donald Trump is not Hitler. And for all the hand-wringing about an attempted coup, it’s all but inevitable that Joe Biden will take the oath of office before the end of this month, and the United States will move onto the next stage of our political history.

But the Dolchstosslegende still offers disquieting warnings for our politics today. At a time when 90% of Donald Trump supporters believe that Joe Biden will do “lasting harm” to the United States, it is easy to imagine a similar legend sprouting up among Trump supporters, in which weak-kneed Republicans like Brad Raffensperger stabbed Trump in the back by refusing to stand up against Joe Biden and his attempts to steal the election. We should be deeply concerned by the fact that 77% of Republicans believe there was substantial fraud in the 2020 presidential election, despite no evidence to support that claim.

When a political leader refuses to accept defeat, when they seek to place blame for their own failings on others, when they declare that anyone who questions their defeat is “disloyal,” we are headed toward a dangerous place. From our earliest scriptures to our great 20th-century tragedy, Jews know that more than anyone.

Our religion and culture strive to remind us that there are better models of political leadership, in which prophetic voices challenge those in power by delivering hard truths that leaders need to hear. In his willingness to stand up to the spurious allegations of fraud made by a president of his own party, Brad Raffensperger served for just a moment as an inheritor of that prophetic tradition. We all owe him a debt of gratitude.

And we should all be worried when Trump starts saying that Raffensperger and other Georgia Republicans stabbed him in the back.