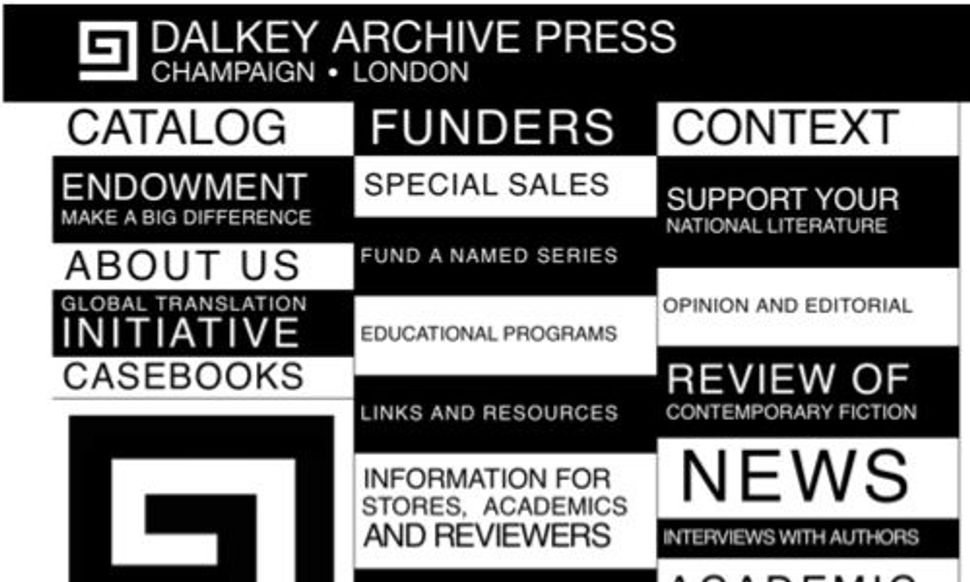 Generally the province of niche publishers like Toby Press, marquee names (David Grossman, Meir Shalev, Amos Oz, A.B. Yehoshua) or, seemingly random enthusiasms (Eli Amir’s patchy publication history for one) Israeli fiction, as with most foreign literatures, feels marginalized in English-speaking countries. Now, especially with Toby Press making cutbacks, the need for a consistent and committed publisher for contemporary Hebrew literature will be found in at least one small part of Illinois.

Although joining with some large Israeli institutions (the Institute for the Translation of Hebrew Literature and the Office of Cultural Affairs at the Consulate General of Israel in New York as well as their own local Program in Jewish Culture and Society at the University of Illinois) their choices haven’t been conservative.

Yoram Kaniuk is an Israeli Beat writer who, until rediscovered at Zeek was largely lost to English. Eshkol’s books have both excited controversy for their ability to speak for a new generation and, perhaps for the same reason, been accepted to the national curriculum in Israel. Orly Castel-Bloom, a writer who grew up in Israel speaking mostly French to her nannies and Egyptian parents, was voted into the list of 50 most influential women in Israel in 1999. Despite winning the Prime Minister’s award twice and the Tel Aviv award for fiction, only one other of her 11 books has previously been translated into English (“Human Parts” by David Godine in 2004).

Literary excellence is the guiding principle. It’s not just about diversity of styles and traditions and philosophical traditions, the series will seek to represent the diversity of types of excellence. The books will be in line with the books that Dalkey Archive has always published — innovative, provocative, and the highest expressions of literary art.

Let’s hope this is a genuine commitment, not just a recognition of the disproportionate size of the Jewish book-buying public!

This article has been amended to reflect the fact that Orly Castel-Bloom’s novel “Dolly City” was originally published in English by the British publisher, Loki Books.

Eshkol Nevo (grandson of Israeli PM Levi Eshkol, but known by family name first and foremost) talks to the Forward at the recent International Writers’ Festival at Mishkenot Sha’ananim.