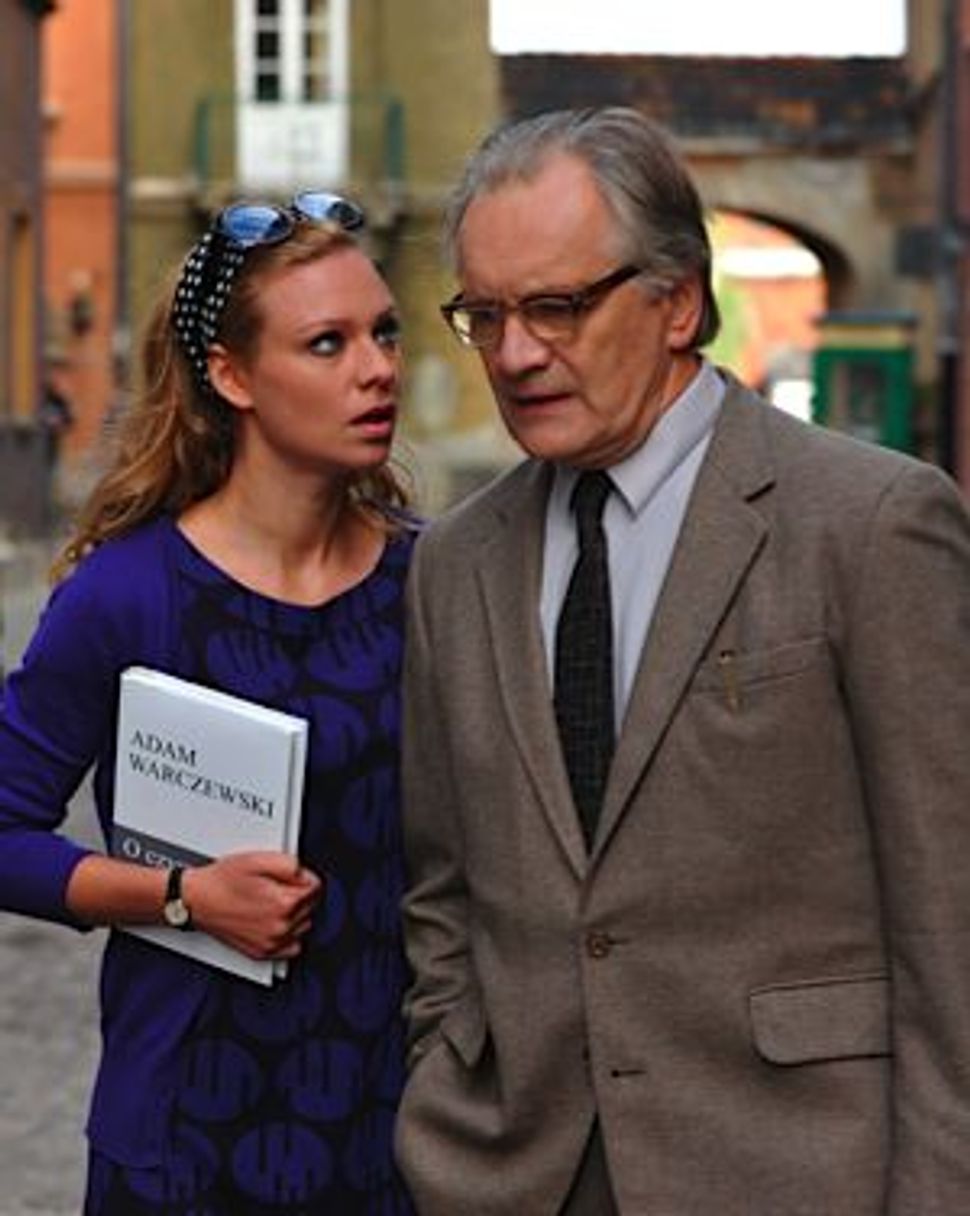 The film, which won the top award at this year’s Polish Film Festival, and screens on November 14 as the closing film at the Boston Jewish Film Festival, is based loosely on the life of the Polish writer Paweł Jasienica. After Jasienica’s death, it emerged that his wife had been an agent of the security services and had informed on her husband for years, to the point of reporting on his funeral. In “Little Rose,” director Jan Kidawa-Błonski turns his focus to the informant herself. Like the 2006 German film “The Lives of Others,” “Little Rose” is a compelling portrait of Soviet repression and its insidious perversion of love.

Played by television actress Magdalena Boczarska in her film debut, Kamila Sakowicz is a tarty blond with heavily lined eyes, hoop earrings, and the smile of a sexpot naïf. Alternately inscrutable and melodramatic, she is, more often than not, seen in various states of undress — we first encounter her in a passionate tangle with her lover, Roman Rozek (Robert Wiecklewicz), in the back room of a nightclub.

Roman, a surly hulk of a man prone to violence and chain-smoking, is an officer in the security services of the People’s Republic of Poland. When it comes to light that Kamila works in the same university as suspected Zionist Adam Warczewski (played by veteran actor Andrzej Seweryn, best known for his role in “Schindler’s List”), Roman coerces her into collaboration. Kamila relents more to please her lover than out of political motives, choosing the code-name “Little Rose.”

Kamila, as it turns out, is a gifted Mata Hari. In short order, she is sharing Warczewski’s bed and then his home. But as Kamila lures Warczewski into her confidence, he simultaneously opens her eyes to the possibility of a life other than that of Rozek’s doxy.

Warczewski emerges the film’s sole free-thinker. He writes for Radio Free Europe and, in a pivotal scene, makes a stirring declaration against censorship and the “little, ignorant men” ruling over Poland’s hearts and minds. Soon, Kamila adopts the trappings of this dissident’s life, hosting Adam’s soirees and bonding with his moon-faced daughter. But though her fascination develops into affection, if not real love, Kamila remains a cog the Communist machine — love for Adam aside, she continues to inform on him to Roman.

Ironically, despite Rozek’s insistence, Warsczewski is not a Zionist, even if he does hold dissident views. In the end it is Rozek himself whose background is suspect — we are led to believe that he may in fact be Jewish and is hiding this from his employers. Returning to his car one night, he finds a Star of David penned onto the windshield. His emotions too are suspect: he authentically loves Kamila, and this is his undoing. In Wiecklewicz’s hands, Rozek is a fine tragic villain, a Communist Iago caught between love and a nature antithetical to its exercise. Yet Rozek’s inability to express his emotions is dictated by the Soviet regime. In one scene, pleased with Kamila’s work, he makes her a gift of a bottle of perfume. He then makes her sign for it. “The People’s homeland can be grateful,” he says, kissing her cheek. Any further expression of tenderness, the film suggests, is tantamount to subversion.

“Little Rose” looks like the filmic equivalent of low-fi music. Visually, and in the often emotionally blunted performances of its actors, it has much in common with small screen drama. But for its setting in 1960s Poland this feels right: There is a fidelity to time and place that a higher-tech production may have sacrificed. Instead, “Little Rose” conjures the look and feel of the very Soviet dearth it portrays. In combination with the gorgeous documentary footage interspersed between scenes, the harshly lit and unsubtly acted film is, like Kamila’s used-looking face, more expressive beneath the makeup. It is touching in this rawness. Although it posits itself as an emotional thriller, the film is more successful, and more important, for its political message. Individual passion, it shows, cannot be reconciled with the totalitarian state.