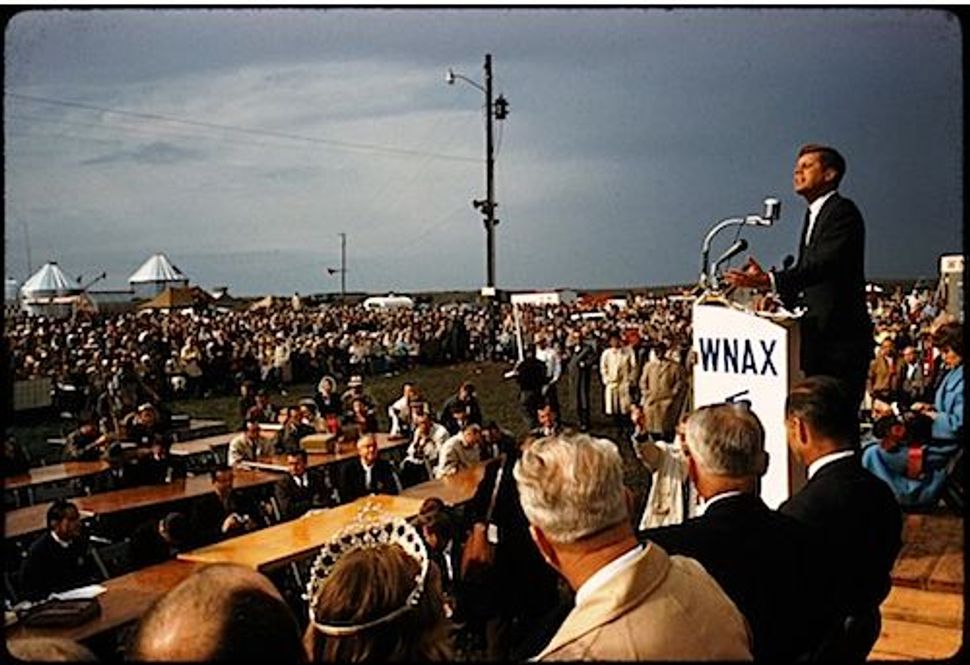 There’s a picture of writer Nelson Algren — who Shay photographed over a 10-year period — waiting for a bus on a rainy Chicago street in 1949. (A Shay photo of Algren graces the jacket of his 1956 novel “A Walk on the Wild Side,” and Shay’s famous shot of Algren’s lover, Simone de Beauvoir, fresh out of a bath, is the subject of a book to be published in Paris next year.)

A characteristically confident Cassius Clay is shown in Louisville, Ky., in 1961 — three years before changing his name to Muhammad Ali — in his locker room the night of his bout with Alex Miteff. (Clay won by a knockout.) There’s a group of welders on a GATX railcar assembly line, blowtorches alight, looking like so many fiery elves at work in a Tolkien fantasy.

At the Democratic National Convention in Chicago in 1968, the wire-meshed windows of a paddy wagon frame the faces of screaming demonstrators as a gaggle of passersby looks on. And there’s a photo of former Smashing Pumpkins front man Billy Corgan in 2010, taken from a three-year series he commissioned after admiring Shay’s book “Chicago’s Nelson Algren,” yukking it up with girlfriend and fellow musician Jessica Origliasso, who smiles beatifically as Corgan holds a tambourine halo-like above his shaved head.

Originally from the Bronx, Shay served as lead navigator aboard a B-24 Liberator in World War II, flying 52 missions over Europe. In San Francisco in 1948, at age 26, he became Life magazine’s youngest bureau chief; he relocated to Life’s Chicago bureau later that year.

The author of more than 50 books, many for children, Shay has taken thousands of photos on assignment for Life, Time, Fortune, Sports Illustrated, the New York Times and other publications. His work is in the collections of the National Portrait Gallery in Washington, D.C., Chicago’s Museum of Contemporary Art, the Art Institute of Chicago and other institutions.

“Art Shay can’t be pigeonholed into this or that type of photographer,” said Erica DeGlopper, Shay’s archivist. “He doesn’t come with an approach to find a prefigured story: He finds the story. His genius is always on assignment.”