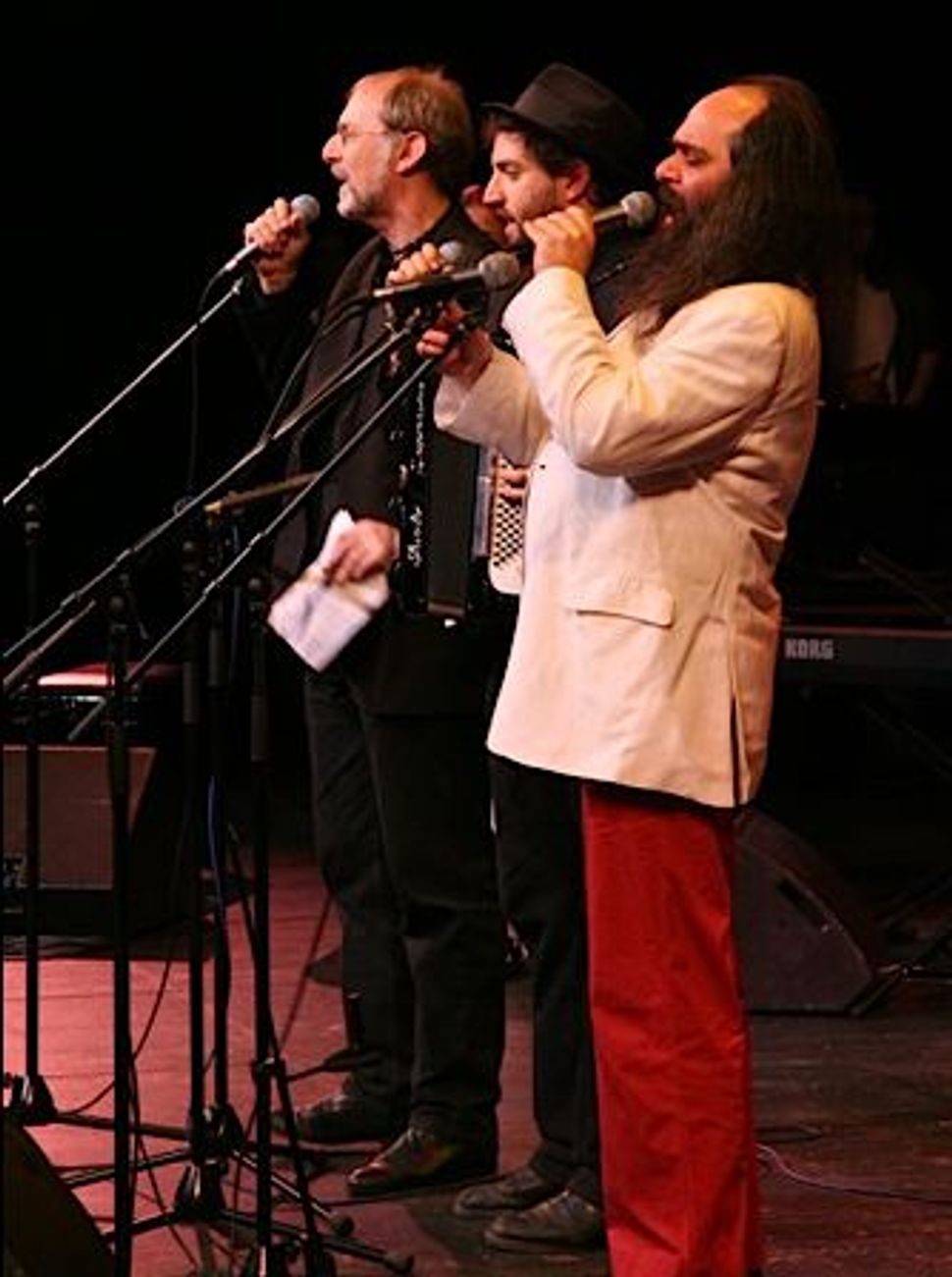 With that in mind, one would expect Moscow, surely a world capital of hedonism, to know how to throw down on Purim. And at Yiddish Fest 2011, a three-hour concert at the upscale music club Milk on March 19, the city did not disappoint. Twenty-five musicians, often on stage all at the same time, taking vodka shots mid-song, shelled roughly 2,000 concert-goers with a raucous fusion of neo-klezmer, reggae, funk and hip-hop sounds, working the atmosphere into what can only be described as part bar mitzvah, part raw punk, part Breslov dance party.

And there was plenty of vodka to ease people’s inhibitions. In addition to local Jewish cultural organizations, like Eshkol and Booknik, as well as the UJA-Federation of New York, the event was sponsored by Jewish Standard vodka, a local brand, which fastened massive bottle-shaped advertisements around the club.

To be fair, it was the international gathering of musicians — really, some of klezmer’s top talent — that stimulated the crowd. Trumpeter Frank London, of The Klezmatics, and Canada’s Socalled traded conductor duties with Kahn and German clarinetist Christian Dawid, leading an amalgam of players from Russian and Eastern European bands, like Opa, the Kharkov Klezmer Band and Nayekhovichi, through breathless music marathons.

With so many musicians, including five accordion players — “Have you ever seen so many accordion players?!” Socalled shouted at one point — it was difficult to determine just how much of the music had actually been rehearsed. Many of the musicians, Kahn said, had played together before, either on tour or at klezmer festivals across North America and Europe. In any case, the show felt like organized chaos.

Founded in 2005 as a series of small concerts for Jewish seniors in southern Moscow, Yiddish Fest has grown into Russia’s most prominent klezmer festival, booking concert halls in the city center and attracting international artists like David Krakauer and Adrienne Cooper. In addition to the concert, musicians stage klezmer workshops and jam sessions in the run-up.

“The festival is focused on reviving and developing Jewish and klezmer music here in Russia, and attracting young Jews,” said Anna Pinskaya, who directs the festival with her sister, Zoya.

At the show, London, wearing a baby blue bathrobe, did the bulk of the conducting, often pointing vigorously at a musician to take a solo before the music went off the rails. Socalled, who only arrived in Moscow the day of the show and admitted that his songs were improvised, led an eight-minute version of his hit “(These Are The) Good Old Days.” Kahn, shouting Yiddish, German and English through an electronic bullhorn, cheekily taunted adherents of kol isha by leading a woman up to a microphone only to tackle her before she could sing. And Nayekhovichi, a Russian klezmer rock band, performed a Numa Numa song with the chorus, “Rebbe Nachman, Nachman, Numa Yay!”

The musical energy peaked early and plateaued until close to 1 a.m. For the hundreds in attendance — religious, non-religious, Jewish, non-Jewish — the music showcased klezmer’s contemporary eclecticism, from somber doinas to brash, baroque klezmer punk to jazzy niggunim. In the crowd, it wasn’t uncommon to see two men popping (a hip-hop dance style) next to a swelling hora circle.

“The festival has become unique in terms of spread and scale,” Pinskaya said. “Moscow Jewish cultural life is very active, but it’s concentrated primarily within certain communities, like the Moscow Jewish Community Center or Hillel. Yiddish Fest has gone beyond the borders of community life.”